Acadiana lawmakers have always rallied around coastal restoration and hurricane protection projects, but now their collective voice is louder than ever. 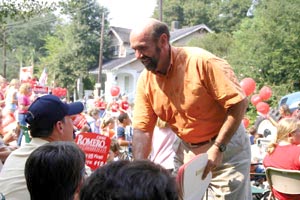 State Rep. Mickey Frith, an Abbeville Democrat, has spent countless legislative sessions droning on about rice and cattle and alligators. In a slight country drawl, dropping names only locals would know, he'll tell you how important the crops are for his district. But recently these staples have taken a backseat to coastal restoration and hurricane protection needs.

As the compounded effects of Hurricane Rita on southwestern Louisiana continue to be analyzed, Frith, chairman of the Acadiana delegation, is sure of one thing: The region needs more protection. He recalls a time when natural oyster reefs served as a buffer for Vermilion Bay. But now they're gone, pulled up by "abusive" dredging during the '80s. The nearby Intracoastal Waterway was also a cushion for incoming storms at one time, until increased traffic began eroding the surrounding land.

According to Christopher Knotts, director of the state's coastal engineering division, these natural and manmade bulwarks are vitally important because every 2.7 miles of land or other obstruction causes enough friction to reduce a storm surge by 1 foot in height.

But today, the only thing that stands between Acadiana and a monster Category 5 hurricane is Vermilion Bay itself ' an uncomfortable prospect when you consider there are open gaps in the bay spanning more than 100 feet, Frith says. While Lafayette is far enough inland that a massive storm surge likely wouldn't reach the city limits, coastal towns remain in danger, and continued coastal erosion in future years will further strip away natural protection from a possible storm surge from Vermilion Bay. Just the thought has local lawmakers piping-hot mad and ready for action ' not to mention curious as to why something hasn't been done sooner.

"I'm hoping and praying that people will start paying attention to this side of the state. We just don't have the notoriety the southeastern coast has on this," Frith says animatedly, shaking a cup of hot chocolate dangerously back and forth in the House committee hallway.

It's the new mantra of the modern Acadiana lawmaker. No longer are they content with allowing their colleagues from other parts of the state to drive the boat on hurricane protection and coastal restoration issues. The related jockeying played out on several different levels during the hurricane-recovery session that adjourned this week.

Scott Angelle, secretary of the Department of Natural Resources, says the volume of people from Acadiana lobbying for these projects hasn't exactly swollen, but their collective voice has gotten somewhat deafening.

"What I'm hearing are louder voices," he says, "people who want more of a say in coastal restoration and hurricane protection."

When Angelle joined other state officials to introduce the governor's legislative package that addresses these issues, members of the Senate Natural Resources Committee approved an amendment largely geared toward Acadiana.

The change essentially expanded the number of board members on the Coastal Protection and Restoration Authority. As proposed by Sen. Nick Gautreaux, D-Abbeville, one member would be added from the western side of the Atchafalaya River, thus guaranteeing a voice for Acadiana in an area where it has been lacking for years.

"This will increase the southwest representation," Gautreaux says.

The authority ' in theory ' would serve as the state's oversight board for hurricane protection, flood control and coastal restoration. Among other things, the authority would have the power to overtake local levee boards if they do not meet certain criteria. At press time, the legislative package was expected to pass handedly.

During the same natural resources meeting, Sen. Craig Romero, R-New Iberia, commented that the time is ripe for Acadiana to step up. But he also warned those in attendance that no matter what they do, a political reality could soon come into play, one that could reverse the traditional rewards of hard work.

"Y'all have been hustling," Romero says. "Nobody from New Orleans is hustling like that. But when the New Orleans delegation walks in the room, guess who is leaving with the money? That's just a fact of life in this process."

This is truly disheartening, he adds, especially considering how absent New Orleans has been from the table on such discussions. (No representatives from the Orleans Levee District have spoken at the legislative hearings.)

In the recent special session, the Acadiana delegation began pushing what could be the most ambitious hurricane protection plan ever considered by the state. Known simply as the "Louisiana Intracoastal Highway," the plan calls for a massive seawall, which doubles as a highway, stretching from New Orleans to Orange County, Texas.

Rep. Joel Robideaux, I-Lafayette, sponsored legislation to have the state study the feasibility of the $2.5 billion undertaking. The 255-mile project would mirror a similar one in Japan, and Robideaux says the state can experiment with private and international development banking.

This is a fairly new form of financing, ongoing presently in other U.S. states, where a company pays for the entire construction, then operates tolls on the highway and transfers ownership back to the state when they have recouped their investment.

"In addition to the traffic benefits, just think of the jobs it would create," Robideaux says.

Other members of the Acadiana delegation say there are plans to meet with the governor and her staff soon to discuss the concept.

Gerald A. Grau, assistant director of the National Wetlands Research Center in Lafayette, says the amount of increased attention has been comforting from his perspective. Despite the few number of restoration projects Acadiana receives each year, Grau says he has received endless calls offering advice on what is needed.

"It's a very good trend to see the cultural and political and societal interests are taking real notice of what's going on," he says. "If these parts don't keep coming together, nothing positive will come of this, though."

While coastal restoration and flood protection may not be historically significant issues for Acadiana lawmakers, officials like Frith contend they will be from now on.

"People might not think our area is worth saving, but it is," he says.