With voter fraud charges and racial tension lingering in St. Martinville, the city's newest councilman steps into "the lion's den." 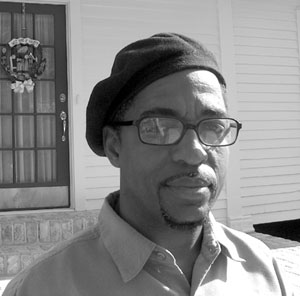 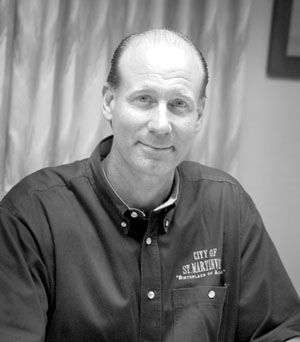 Dennis Paul Williams still lives in the same St. Martinville neighborhood he grew up in, but the 46-year-old artist and musician has seen the world. The self-taught painter's ethereal works sell in galleries from New York to Tokyo, and Williams tours the globe as the guitarist for his brother's band, Nathan & The Zydeco Cha-Chas. Prior to this year, politics hardly entered his mind. "I don't know anything about politics," says Williams, St. Martinville's newest city councilman. "I haven't been at any meetings or anything. The whole idea is for me to come in as a neutral person."

To the surprise of many in St. Martinville, Mayor Eric Martin nominated Williams to replace District 3 Councilwoman Pam Thibodeaux, who resigned from her seat on Monday, April 4, amid pending federal charges of falsifying information on voter registration cards related to her 2002 election. St. Martinville, which is about 65 percent African-American, has been bitterly divided since the election. Thibodeaux is white, and was backed by Martin and other powerful white officials in her election over African-American candidate Mary Francois. At Monday's meeting, Thibodeaux read from a prepared statement, saying, "I've tried to serve this district equally and fairly without regard to race or religion." She says that she accepts responsibility for "the mistake I made in running for the District 3 council seat."

Even as Thibodeaux was expected to plead guilty in an April 12 hearing to charges of conspiring to falsify voter registration cards, the event won't bring closure for the small town of St. Martinville ' a town where many feel the majority African- American population has been suppressed by a small tight-knit group of white politicians.

"Why didn't they put in Mary Francois, who ran for the seat and people voted for?" asks Eddy Greig, a white longtime District 3 resident who was chairman of an effort to recall Thibodeaux immediately following the 2002 election. "It looks like to me that they just put somebody in there who they thought they could get to do what they want or vote the way they want."

The choice of Williams has brought out mixed emotions in St. Martinville's African- American community, where many view Williams as a friend but still fume over Francois' plight.

"I thought it was a slap in the face to the black community," says Paulma Johnson, who lives outside the city limits and has sat on the parish school board for 33 years. "Mary Francois won the election. The election was stolen. It's just that simple. It doesn't take a Philadelphia lawyer to figure that out. How can you win something and then have to give up the seat? This city better re-examine itself and try and set an example for our children and the generations to come. The city council ought to be embarrassed."

Johnson directs his anger largely at Martin and other power brokers in St. Martinville. The District 3 council seat has been a contentious epicenter of racial tension for more than a decade. Beginning in April 1990, the city of St. Martinville was subjected to a 12-year council election hiatus due to a redistricting battle over the racial makeup of District 3. A resident lawsuit finally prompted Justice Department approval of a 65 percent African-American majority District 3, paving the way for the 2002 elections.

After losing to Thibodeaux, Francois began to piece together what she claimed was a "systematic scheme" by public officials and the Thibodeaux camp against her election.

"I had never been involved in an election before," Francois told the The Independent Weekly last fall. "These people should be punished. This has been such a long process. We have never stopped saying this was wrong. I've always had intentions to run again, and even if I had lost fairly I would run again. It's a shame that the people had to wait for 12 years, and now this."

In Francois' post-election challenge, a state district judge ruled that only 12 of the votes cast in the election were illegal, leaving Thibodeaux the victor by one vote. Seven of those 12 voters, including Thibodeaux's brother, Burton Champagne, pled guilty last year to falsifying addresses on voter registration cards.

After the courts upheld the election results, Greig started a recall of Thibodeaux, which he says went well until several supporters ' including his own mother and Dennis Paul Williams ' began removing their names from the petition. Greig attributes the reversals to harassment from city officials, which he says came to him in the form of a notice citing his woodworking shop for rat infestation, rotten wood and rusty metal on his property.

"That sounded like harassment to me," Greig says. "I had no rats in here, no rotten wood. You can't build outdoor furniture with rotten wood. Rusty iron, I plead guilty to that ' because anywhere you've got iron there's going to be rust."

The charges were dropped, and the recall effort faded. An FBI investigation into the election culminated in December 2003 with Thibodeaux's indictment for allegedly writing false addresses on voter registration cards.

Accusations of voter fraud are nothing new in St. Martinville. "I've been hearing that my whole life," says Greig, who wishes his property had never been annexed into the city in the mid-90s. "You might say [the 2002 election] was business as usual."

The state investigation into the Francois-Thibodeaux election also revealed that Francois' address was outside the council District 3. "They don't ask her questions," says Mayor Eric Martin. "Why, because she's black. It's beyond me why the federal government didn't question her about her own residency."

The name of Martin's own father, former police chief Dickie Martin, came up in the 2002 elections when a complaint led to a state elections investigator discovering that there were nine people improperly registered to vote at his house. (The Martins maintain these were all unintentional and no voter fraud charges have ever been filed against Martin or his father.)

"Go anywhere in Acadiana and you will find this," says Mayor Martin. "People grow comfortable with their polling place, and they just don't change it. It's very common throughout Acadiana. You will find people 35 and 40 years old that are still registered at their parents' house."

Francois and 28 other St. Martinville plaintiffs are still seeking financial damages from the 2002 city elections with a civil suit against Mayor Martin, Thibodeaux and the city of St. Martinville. The case, filed in March 2003, is awaiting trial before federal Judge Rebecca Doherty.

"They use people, and they sit back clean," says parish school board member Johnson. While Francois and her supporters believe that the mayor and other city election officials orchestrated 2002's election fraud, Thibodeaux hasn't implicated other individuals as the source of the discredited voter registration cards.

Martin insists his critics, who have rallied around Francois, are too quick to subscribe to racist conspiracy theories.

"[Mary Francois] has found a way to milk this in every way, shape, and form to bring herself up," Martin says. "And there are people that their whole issue in life is to keep the black and white controversy going ' that's their calling card. They like to have something to keep picking at the wounds. They like it even better when the wounds fester. It makes it very difficult to get from point A to point B. It's very, very frustrating."

Now in his fourth term, Martin (who says he will not seek re-election next year) is looking to newly appointed Councilman Williams to help bridge the divide in St. Martinville and foster a more positive image for the city.

"It's typical to see Dennis out on the sidewalk with his broom waving at cars as they go by," Martin says. "About the only thing you can say about Dennis is he goes to church a lot. He's just a good fella."

Councilman Murphy Simon, who nominated Francois following Thibodeaux's resignation, says she deserves the District 3 seat. "Nothing against anybody else that may now be interested in serving," Simon says, referring to Williams' sudden political aspirations. "But I think first we need to look at someone who has continually shown an interest in serving this community. Mary should be given that chance. We need to give the people their wish."

Martin counters that Francois has been largely absent from city affairs of late.

"With all the media attention it's put her in a position where she's done well for herself," he says. "In some cases certain groups in the state put her on a pedestal, and maybe that's why we haven't seen her much." (Over the past two years, Francois has obtained her state license to sell insurance and frequently visits her son who has enrolled at St. Augustine High School in New Orleans.)

Simon and Councilman Ike Robertson, the council's two African-American representatives, both voted for Francois. Councilmen Mike Fuselier and Pat Martin took up the mayor's recommendation, with Martin casting the deciding vote for Williams.

Williams was not at the meeting last week based on a recommendation from Martin, who said he anticipated emotions would be running high. Martin also brought in extra security for the meeting and refused to take public comments. "I know what their plan was," says Martin. "Their plan was to try and make it a circus. [Francois] has found a way to milk this in every way shape and form to bring herself up. Nobody can contest that Dennis is a fair and sensible person, and that is what this district needs right now. That district needs someone that is going to come and be a peacemaker and not a troublemaker."

The peaceful Williams, who prides himself on being apolitical, is now stepping into hostile foreign territory. "It's the lion's den," he says. "But I believe anytime you want to have equality you have to put things on the line. I just have to take it one day at a time."

Williams adds he's not going to change as a councilman and still plans to tour internationally, displaying his artwork and playing with Nathan & The Zydeco Cha-Chas.

"It was a shock to a lot of people that I would do something like this," he says. "I think it was a shock because they've never seen any politician ever come by my house before, not a one. I don't play that. I'm not beholden to anyone, except God."

He hopes to bring more spiritual and global awareness to the St. Martinville City Council. "It's not a political thing for me; it's a community thing," he says. "People say things like St. Martinville's cursed. We can't grow. But I don't think that's true."