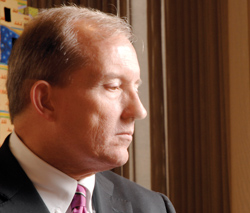 Snubbed by one of its longtime rivals in a takeover attempt, IberiaBank marches on. By Heather Miller

A little more than a month after Whitney Holding Corp. announced its merger with Mississippi-based Hancock Holding Co., Whitney shareholders were jolted by the discovery that another bank had been in the buying picture for more than three months before the Whitney-Hancock agreement came to light.
Wednesday, February 23, 2011

Snubbed by one of its longtime rivals in a takeover attempt, IberiaBank marches on. By Heather Miller

A little more than a month after Whitney Holding Corp. announced its merger with Mississippi-based Hancock Holding Co., Whitney shareholders were jolted by the discovery that another bank had been in the buying picture for more than three months before the Whitney-Hancock agreement came to light.

IberiaBank's Daryl Byrd, who initiated buyout talks with Whitney, lost out in a December bidding war with Hancock.

And some of those shareholders are not pleased with how the deal ultimately went down. As a group of out-of-state Whitney shareholders moves forward with a federal lawsuit against Whitney based on claims that its execs did not act in shareholders' best interests, further analysis of the deal reveals that Whitney's shareholders aren't the only ones feeling shortchanged.

Filings with the U.S. Securities and Exchange Commission disclose that Whitney, Louisiana's largest bank, was in negotiations with another unnamed banking company - now confirmed to be Lafayette-based IberiaBank - for more than three months before accepting the 11th hour bid from Hancock.

But the potential for Whitney to sell was not the brainchild of Whitney or Hancock; it was IberiaBank that aggressively pursued the deal from Sept. 7 until Hancock's offer was accepted by Whitney and announced Dec. 22, according to a play-by-play by Nick Gorski of SNL Financial Services, a Virginia-based financial information firm.

In fact, Whitney's board members on Dec. 1 decided against extending their "For Sale" sign to other companies fearing corporate leaks and on advice from JPMorgan that a sweeter offer probably didn't exist. Hancock's name was never in play - until Whitney CEO John Hope III received a call from Hancock days after the board opted not to shop around.

Randy Smith, an attorney representing Realistic Partners, says the lawsuit is seeking class-action status based on a "commonality of interest" for shareholders. Whitney has a month to respond to the suit before court motions can progress.

The lawsuit seeks both injunctive relief - to block the merger - and unspecified damages for the shareholders who claim that Hope "sought to protect and advance his own interests at the expense of Whitney's public shareholders." (See related story below.)

Smith directed questions about the number of shareholders in the suit and how many shares they collectively own to New York-based lawyer Richard Brualdi, who is assisting with the case. Brualdi did not return phone calls and emails requesting comment.

Despite the pending litigation, the required two-thirds of Whitney's shareholders and the majority of Hancock's shareholders are expected to approve the merger when they vote on it in late March. The deal would lift Hancock-Whitney's assets to $20 billion, about 80 percent higher than the assets of IberiaBank.

Although it is said to be steaming over the loss of a longtime rival and how the negotiations played out, IberiaBank is still sitting pretty - on a heap of excess capital SNL Financial says it will likely deploy on expansions into other southeastern states like the Carolinas, Georgia and Florida.

A time line on IberiaBank's months-long negotiations to acquire Whitney illustrates just how far the two companies had come in their talks before Mississippi-based Hancock mysteriously lunged in days before a potential Iberia-Whitney deal was struck.

Sept. 7, 2010 - IberiaBank CEO Daryl Byrd contacts Whitney CEO John Hope III to request a meeting about a merger.
Sept. 22, 2010 - Whitney board members direct Hope to tell IberiaBank they were not interested at the time, but IberiaBank continues courting.
Nov. 8, 2010 - The two companies enter a nondisclosure agreement amid negotiations after an employee issue between the two banks was resolved in October.
Dec. 1, 2010 - Whitney board members decide against shopping for better offers from potential buyers.
Dec. 14, 2010 - IberiaBank raises its offer; Whitney receives an "unsolicited" call from Hancock a few days later.
Dec. 19, 2010 - Whitney informs Iberia of the other interested buyer.
Dec. 21, 2010 - Iberia and Hancock both submit their final offers.
Dec. 22, 2010 - Hancock and Whitney announce their merger.
Source: Nick Gorski of SNL Financial

Whitney executives eligible for severance payments once deal with Hancock Holding is complete. By Rebecca Mowbray

When Hancock Holding Co. revealed Dec. 22 that it was merging with Whitney Holding Corp., it announced that it would repay Whitney's $300 million in Troubled Asset Relief Program money at the deal closing to give the combined company a fresh start.

But that plan also may open the door for Whitney executives to receive generous severance payments that would not have otherwise been allowed under TARP if they leave the combined company.

Like many companies, Whitney has "change in control" agreements with executives spelling out their severance packages if they are terminated because their company is acquired by or merges with a competitor.
Under the terms of the U.S. Department of Treasury's bailout programs, TARP companies aren't allowed to pay severance or change in control payments to the top ten employees.

But if a bank that didn't take TARP money, such as Hancock, buys a TARP bank, something known as the "white knight" rule says that the Treasury's executive compensation rules don't apply.

This development does not sit well with Whitney shareholders like John Cummings, who describes himself as "heartbroken" over New Orleans' signature bank having to sell out to a smaller competitor because of what he sees as bad decisions by Whitney executives.

"That seems off that someone who participated in the failure of the bank could be rewarded for destroying the bank," Cummings said. "I would hope that executive officers (would) just refuse them. Many of their actions and inactions have caused hundreds of millions of dollars of losses for the stockholders."

Cummings noted that Whitney chairman and chief executive John Hope told shareholders at the contentious 2009 shareholder meeting that he accepted "full responsibility for our performance."

For its part, Hancock seems to expect that change of control payments will be made. "Each of Whitney's executive officers has an employment contract that provides severance benefits in the event of a qualified termination' in connection with a change in control. The integration process could result in qualified terminations' which could trigger severance payments that could result in significant expense and in the loss of experienced officers," according to the discussion about risk factors associated with the merger in Hancock's draft proxy about the deal.

The idea behind change in control agreements is to make sure that executives are taken care of so they won't be worried about their own future when they should be concerned with doing what's best for the company and its shareholders. Such an agreement, for example, could help ensure that an executive wouldn't act in his own self-interest and turn down an opportunity for a merger that would be beneficial to shareholders because he's worried that his job could get cut in the consolidation.

Change of control agreements also have become a tool for recruiting and retaining executives on the theory that there's a limited pool of people who are qualified to hold the top jobs in corporate America.

But such agreements are perennial sources of shareholder litigation when executives cash out after performing poorly.

"It generally has been a corporate governance issue on the radar screen for many shareholders for some time," said Jeff Mahoney, general counsel at the Council of Institutional Investors, which promotes good corporate governance practices.
Because of such shareholder discontent, the Dodd-Frank Wall Street Reform and Consumer Protection Act of 2010 requires companies to disclose the details of so-called golden parachutes and which executives have them, and requires shareholders to take nonbinding votes on executive compensation packages so they know what to expect.

The Council of Institutional Investors also recommends that companies beef up the language in change in control agreements to make sure they can be triggered only if an executive is released as part of a merger, and not because of poor performance.

But perhaps anticipating concerns like Cummings', Hancock notes in the draft proxy statement soliciting shareholder approval of its merger with Whitney that Whitney shareholders need to know that their interests are not identical to those of executives.

Whitney's change of control agreements provide for a cash severance equal to three times an executive's average gross income for the highest of three of the past five calendar years. Each executive's severance also includes the bonus the executive would have received in the year of termination, a cash payment for the company's 401(k) matching contribution, a cash payment for the present value of three years of benefits that would have occurred in the company's pension, continued medical and life insurance benefits for the executive and his family, and transfer of ownership of any club membership or other executive perks.

The cash compensation is based on annual gross income, and usually agreements would be more specific by linking it to salary and annual incentive. The metric of the highest of three of the past five years is also slightly more generous; it's more commonly just the average of the past three years.

Giving the chief executive officer a severance payment of three times salary an annual incentive is not unusual, Harris said, but that multiple typically declines to two or two and a half times for other executives.

The idea that the change of control agreement payment could be triggered as long as three years after the merger is consummated is also expansive. "Three years is pretty long," Harris said.

While it's difficult to figure out the value of the entire package, Whitney Chairman and Chief Executive John Hope, for example, would get a payment of $1.9 million in salary, plus other benefits, according to a summary of executive compensation from Whitney's 2010 proxy.

Whitney executives have not earned bonuses in recent years because of the TARP money and the performance of the bank.

Whitney officers also have been allowed to defer a certain amount of their compensation each year. Instead of those payments being paid out over time as previously specified, Whitney executives and directors will get a lump sum payment if they are terminated. Hope, for example, has $619,809 in deferred compensation available to him, according to draft merger proxy.

Whitney and Hancock say they can't comment on anything related to the merger except for what's in the filings.

In filings, the banks say they have not decided which executives will stay and which will go in the combined bank. The composition of the board of directors also hasn't been decided. Jonathan Briggs, managing director of the investment firm Chaffe & Associates, Inc., which advises a number of local banks, said the who-stays-and-who-goes debate is undoubtedly one of the biggest questions behind the scenes.

"They've already begun, I'm sure, and they'll continue through the whole approval process," Briggs said of the talks about management of the combined company.

This story was first published in The Times-Picayune. Rebecca Mowbray can be reached at [email protected]