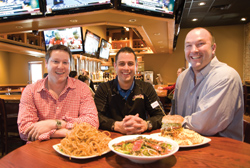 Most stories that begin with bar napkin scrawls are used to wipe tears away. This one started a decade-long, multi-million dollar company.

Jack Warner and Brandon Landry were 23 and 22 years old, respectively, and on their way back from an LSU basketball game (where they were walk-ons, natch) when they had an idea. Despite neither having a background in the service industry, they began to draw up plans for a bar, the kind Tiger jocks like themselves would adore. To educate themselves on the tawdry tales of service industry life, they went to work at several different bars and restaurants around Baton Rouge, from Chimes to Mellow Mushroom. Landry says they worked as bartenders, barbacks, servers, in the kitchen, and every job you can imagine in both back-of-house and front-of-house except management.

Little did they know that management experience would come from quickly opening eight venues in under 10 years. After securing property investors, it took another year before André Fruge of Louisiana Capital Certified Development, a private/non-profit corporation that markets and facilitates the SBA 504 loan program, agreed to help them secure financing. Now under the mantle of their partnership company, Last In Concepts, they have opened The Roux House, Happy's Irish Pub, Schlittz and Giggles, and Walk-On's - which they just expanded to Lafayette.

Located on Kaliste Saloom Road near Randol's, Walk-On's Bistreaux and Bar is spacious and bright and playing every song you remember from every '80s movie imaginable. If you love sports then this is your spot. Since it was created by two avid sports fans and players, there are flatscreen televisions truly anywhere you look and they are married to the most important game playing that hour.

ABiz gave the partnership's first venture into Lafayette a try on a busy day during its first week.

We tried the ahi tuna salad, which was enough for three people. Fresh mixed greens with thick slices of ahi tuna - cooked appropriately! - spiraling out from the center, pointing at the avocados, the whisper-thin slices of red onion, and bits of carrot and toasted sesame seeds then everything drizzled with its Asian sesame glaze that has a bright ginger taste.

Next was the Jack Burger, named after founder Warner. First off, know that it is served to you with a steak knife plunged into its meaty heart to keep it all together. The bun is brushed with butter and lightly toasted. Then comes the pound of Angus beef in the form of two patties, each with its own helping of cheese, fried shoestring onions and bacon. Vegetables make a cameo appearance at the top of the burger in the form of shredded iceberg lettuce and a slice of tomato. It's the kind of burger that you cannot eat without visions of Homer Simpson mumuring "mmmmmburger" slouching through your head. This item is the newest addition to Walk-On's carnivorous selections and is so far exclusive to Lafayette. We tried two appetizers, Angels on Horseback and Onion Mountain. The latter is...well, it's a platter piled with fried shoestring onions. The former is a large shrimp, more of a prawn, sliced and stuffed with an oyster then wrapped up in applewood smoked bacon before being battered and fried. When it arrives you think you've order four chicken wings from a monstrously sized bird. You haven't. Those are a meal in and of themselves.

The actual bar in Walk-On's is enormous. Rimmed with flatscreens, sports paraphernalia from both LSU and UL Lafayette and overflowing with choices of beer, there is a third of its total 47 televisions around the bar and 50 beers on tap. Landry asks that when you come in and you don't see your favorite brew to suggest it to the management - it has room for 25 more beers to tap into. Private parties can be booked for the patio or separate banquet room.

Moseley & Hollard back to all-men's store

When Joe Moseley and Roy Hollard combined their decades of expertise in the men's clothing business in 2005, their original intent was an upscale men's clothing store. Riding that success, a year later they expanded into women's clothing and accessories. Now Moseley & Hollard, located in River Ranch's Onebane building on Camellia Boulevard, has decided to return to its original mission.

"Our men's business is through the roof," Moseley says. "It's the goose that laid the golden egg." In reflecting on the year ahead, Moseley says the partnership decided to discontinue its women's clothing to make room for an expansion of its men's lines - everything from tailored clothing to sportswear, shoes and accessories.

The full inventory of women's fashions is currently marked down 50-75 percent, and Moseley anticipates the inventory will be depleted by late March.

Joe Moseley and Roy Hollard became good friends in the late 1980s, when the two worked together in one of Lafayette's premier men's clothing stores, the former Gaidry's in the Oil Center. They pursued separate careers in the local men's fashion business, but the two continued to hunt and fish together, and their conversations over the years eventually turned to talk of launching their own concept. In 2005 they took the plunge, leaving their respective employers to open Moseley & Hollard, which they described as "classy contemporary with a twist." - Leslie Turk

Cortez, a Republican businessman representing District 43, has held at least two recent fundraisers at private homes, and his campaign account has more than $100,000. All of the new commitments have not yet been tallied, says Cortez, whose goal is to double that $100,000 in the next 2.5 months. "I'll be close to $200,000 by the time we go into regular session [April 25]," Cortez says.

State law allows him to raise money until the special redistricting session (exceptions are made if the fundraiser was set before the session was called), scheduled to convene March 20 and end no later than April 13. Lawmakers also are allowed to raise money between the special and regular sessions, and Cortez says he's already slated a fundraiser for that window as well.

The election for all of Louisiana's 39 Senate districts and 105 House districts is Nov. 19, with the primary Oct. 22 and qualifying Sept. 6-8. "I don't really see a scenario where I wouldn't be [a Senate candidate]," Cortez says, noting that the main factor affecting his decision is the uncertainty over redistricting. While it appears that his home off Kaliste Saloom Road will remain in District 23, there are no certainties in the process.

The NIMSAT Institute at UL Lafayette and Frank's Casing Crew took home top honors when the Greater Lafayette Chamber of Commerce announced the winners of its 2010 Acadiana Innovation Awards at its annual banquet.

In the public sector, the winner was the National Incident Management Systems and Advanced Technologies Institute at UL Lafayette, a  "national-scale" research institute based on the experiences of researchers at UL Lafayette following hurricanes Katrina and Rita in 2005. The institute was chosen by the chamber for its focus in research on public-private partnerships and establishing best practice linkages between government and industry stakeholders. The NIMSAT Institute is working on projects that contribute to the overall innovation within the community and the state.

Frank's Casing Crew and Rental Tools Inc. was chosen as the private sector innovation winner for its 1250 Ton Drill Pipe Spider and Elevator. The tools are the first-ever drill pipe handling tools in the industry to boast a safe working load rating greater than 1,000 tons. The technology is used worldwide and was developed, manufactured and tested in Lafayette by local workers.

Izzy Gravouia, co-owner of Lafayette's Green Room, is opening Roundabout Tavern in the heart of Youngsville.

Located at 327 Iberia St. (Hwy. 92) in the Midtown Plaza, Roundabout Tavern is a family-friendly restaurant serving burgers, wraps, poboys, personal pizzas and a daily plate lunch special. It expects to be open every day except Monday. There will be a full bar.

Featuring nearly 3,000 square feet of customer space, the tavern plans to have live music on Friday and Saturday evenings. Gravouia is operating it with his wife, Lilian Winn Gravouia.

Izzy and Lilian are parents of two young children and want a "mom and pop" type of feeling for their restaurant and venue. The employees include themselves, and the Gravouias are hiring several staff members to serve food and tend bar. 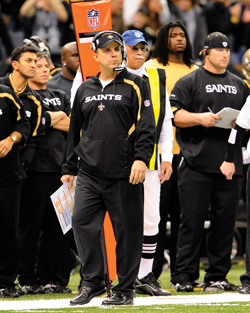 New Orleans Saints head coach Sean Payton is coming to Lafayette's Trynd restaurant downtown for a celebration and benefit for his Play It Forward Foundation.

Trynd Ristorante/Boutique Lounge, restaurateur Nidal Balbeisi's latest addition to the Lafayette dining scene, is hosting the charity event Saturday, March 19, as part of its grand opening celebration. "The Trynd of Giving," headlined by Payton, is co-presented by Sterling Automotive Group and also benefits Feed the Children and ProtectOurCoastline.org. The event begins at 7 p.m. at Trynd, 116 E. Vermilion St.

"To be able to open Trynd in a way that gives back to the community and helps so many Louisiana residents is a proud moment for myself and my family," Balbeisi says. "March 19th is going to be a tremendous night, and I know the generous people of southwest Louisiana will support this event and make it an unbelievable success."

Tickets are $125 per person; several sponsorships are available and donations are for the silent auction are still being collected.

For more information or to purchase tickets, contact Nicole Hackmann at 962-2258 or [email protected] - Leslie Turk

An alliance of influential business leaders and lawyers from across the state has some advice for state lawmakers coping with a projected $1.6 billion budget shortfall in the upcoming session: Free up statutorily protected funds, increase college tuition and, among other suggestions, get rid of more than 9,000 state employees.