The Independent Weekly racks up 47 awards ' including the Freedom of Information Award ' from the Louisiana Press Association. 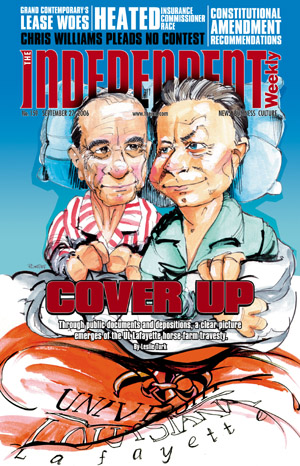 The Independent Weekly won the Louisiana Press Association's highly sought after Freedom of Information Award for its coverage of UL Lafayette's failed horse farm land swap and the paper's lawsuit against the university to protect citizens' rights to public records. In presenting the award, Robert Scott, Baton Rouge bureau chief for The Times-Picayune, said, "Judges agreed that the newspaper's relentless effort to bring to light this questionable land swap proposal and its passionate and vigorous coverage of the issue through news articles by reporter Leslie Turk and editorials was truly worthy of this year's award." The competition is open to all newspapers in the state, and contenders for this year's award included The Advocate of Baton Rouge, The News-Star of Monroe and the Toledo Bend Tribune.

Nearly 4,500 entries were submitted by 83 Louisiana publications to LPA's 2006 annual competition. Awards were handed out Saturday at the 127th annual convention in New Orleans, and The Independent Weekly took home 47 of those awards ' 20 of them for first place honors.

In the Free Circulation and Special Interest Editorial Competition, Staff Writer Nathan Stubbs won first place in the Best Investigative Reporting category for his account of the rise and fall of former Lafayette Police Chief Randy Hundley. Editor Scott Jordan won first place for Best Feature Story for his narrative piece on the first post-Katrina Mardi Gras in New Orleans and returning to his former home, "A Flood of Emotions."

The Independent's graphics department, under the direction of Jason Roy, took home honors for its work with both the paper's editorial and advertising departments. Roy's staff won first place awards for both color and black and white ads, pages with multiple advertisers, advertising ideas and the best ads for retailers. In all, the graphics department captured 17 awards, 6 of them first place honors, for its work.

The Independent Weekly also won first place for its Web site, www.theind.com, and its daily news blog, The INDsider, found at www.theind.com/blog.

Lafayette's Gannett-owned Daily Advertiser won top honor in the infamous Oops! category, for its bold, front-page headline on its August 2006 story about the reopening of a Catholic church ' "Synagogue reborn." The Independent Weekly proudly nominated the daily paper for the distinction, which came with the day's only trophy, topped with a golden turkey.