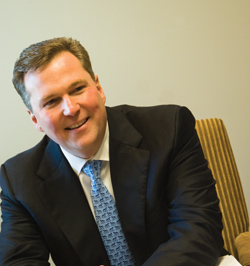 Lafayette attorney Tyron Picard announced his departure from Acadian Ambulance in December and confirmed in early February that he has formed The Picard Group, a state/federal governmental affairs, lobbying and business consulting group. Son of former state legislator and education Superintendent Cecil Picard, Tyron Picard spent more than a dozen years with Acadian and its affiliates, most recently as executive vice president of legal and governmental affairs. The new firm, called TPG, is headquartered on Camellia Boulevard in Lafayette and also has offices in Baton Rouge and Washington, D.C. ABiz sat down with Picard to discuss his entrepreneurial spirit, what drove the decision to leave one of Acadiana's largest privately held companies, why the new gig is a good fit for him - and why he's already fielding questions about the market value of TPG.

1. It's safe to assume you didn't just wake up one morning and say, "I think I'll strike out on my own." How did you come to the decision?
A combination of things, really. The bipartisan relationships I have made in both Baton Rouge and Washington, D.C., were large factors. Sen. Landrieu and Congressman Boustany were kind to call me my first week in business and congratulate me on the new venture. My late father and I had broadly discussed the idea about six years ago, as something we might do when he retired from public life. Unfortunately, we never got that chance, but the idea stuck. Over the years, I was approached with some attractive offers from other companies to handle their governmental affairs, or join their management team, and I realized that I enjoyed both. I recognized that at 35, I didn't have the relationships to consider a move like this and in 10 years I couldn't see starting a new business, but now - at 45 - it seemed like "the sweet spot" for me professionally.

2. During the decision-making process, what kind of second thoughts did you have?
Well, the night I told my boys that I was doing this, my 10-year-old son Drew burst into tears and said it was a "horrible idea." I asked him why, since I am now going to be my own boss, and own my own company: "Because you won't be able to call the Acadian Dispatch Center anymore when we are in traffic on I-10 and ask if there is a wreck on the Basin bridge." He did wake up a few mornings later with a smile: "Does this mean that you can now evacuate with us for hurricanes, Dad?"

3. What was your biggest contribution to Acadian?
Three come to mind. In the ambulance world, helping deliver unity. On the federal side, it was helping lead the American Ambulance Association's PAC. Twelve years ago, we were a very fragmented and territorial industry that did not have a united voice on federal policy. As a result, it was easy for decision-makers in D.C. to "do nothing" about our requests, since factions were split on priorities and messages. With the support of AAA President Jim McPartlon of New York (who incidentally will be joining TPG), we were able to unify the U.S. ambulance industry and speak with a common voice. On the state side, it would be the efforts to bring Medicaid rates in line with the cost of providing service. When I started in 1998, we were paid well below cost and were given the same reimbursement as you would pay a taxi from the airport to downtown New Orleans.

4. Will you still be lobbying on Acadian's behalf?
It's my understanding that Acadian will continue to rely upon governmental services being provided by in-house employees, and my former governmental affairs duties are being reallocated to a couple of existing employees.

5. Is there a model for your firm?
We tried to get Paris Hilton, but we couldn't afford her, so we are considering Taunte Pills (state Sen. Fred Mills). Seriously, I have always admired how Tommy Boggs built Patton Boggs. It is a very bipartisan group, which offers high levels of integration for client needs (law, administrative, legislative, regulatory). More recently, John Breaux and Trent Lott successfully crafted that same model. In addition to a bipartisan approach, TPG offers the in-state component - being able to interact with the client locally and manage their needs at the local, state and federal levels.

6. Lafayette already has an extremely powerful lobbying firm based here - with an impressive client list. Will there be conflict over clients and territorial expertise?
Absolutely none. Randy Haynie was one of the first people I called for advice and counsel the day I decided to do this. We actually will work together on at least two clients that I can think of, with him handling the state work and me handling the federal work.

7. There are already thousands of lobbying firms in D.C. and dozens based here in La. Why's there a demand for another?
Agreed, but there is a reason why, for example, some hotels and restaurants make it while others do not. It's not merely a question of demand, but client service, just as in any successful enterprise. I had one client tell me that they have not been visited by their previous lobbyist in 10 years. Amazing. Clients don't expect their lobbyists to succeed 100 percent of the time, but they do expect to hear from them, and for the lobbyist to do more than just offer reaction when the client calls.

8. Who's on your client list?
You are as hard on me as my son, who asked me the first week in February: "Dad, how many clients do you have so far?" followed by, "And what is the market value of TPG now?" In our first 30 days we have confirmed the representation of two Fortune 500 companies - one in health care and one in construction; a major environmental and coastal restoration company; a national medical Group Purchasing Organization; a diverse family-owned business in Louisiana, a financial services company in Chicago and an ambulance company in the Midwest. We are awaiting the return of signed contracts from a number of others who requested proposals.

9. TPG started off with formal affiliations with both Baton Rouge-based Roedel Parsons and D.C.-based CJ Lake. Tell me why they're a good fit for you.
I have known the Roedel partners for over 20 years - they are a strong brand in BR in legal and public policy arenas and had no presence in Lafayette since the untimely passing of our mutual friend, attorney Mickey Mangham. This alliance gives the firm a stake hold in Lafayette, while offering TPG the added resources of some very accomplished individuals in the governmental affairs section of their firm. The CJ Lake relationship came about through Lafayette native Emily Bacque. She worked for Sen. Breaux, and I kept in touch with her casually through work trips to D.C. Her work at CJ Lake in the areas of appropriations and funding for public projects has been impressive, and we had lunch over the holidays to discuss how TPG and CJ Lake could work together. We've also added April Springfield as our director of public policy research. She brings 17 years of experience, including time in two presidential cabinets, in the U.S. Congress and as senior policy adviser to the former governor of Louisiana.

10. It's long been in the back of many minds that politics might be in your future. Tell me about your experience in seeking political office and whether that's completely out of the picture now.
My run for Congress and defeat in 1996 was probably one of my greatest career molders. I realized in losing that my real joy and skill was not in actually serving as an elected official who made policy, but in helping companies and businesses as they try to educate and inform - and then hopefully impacting public policy for the growth of the business. I don't ever see myself running for office again, and I am perfectly at peace with that conclusion. It's out of my system!

11. Lobbying has an awful rep in the eye of the public, along with news media, lawyers and used car dealers. Why?
Lobbyists are sometimes their own worst enemies, not because of their clients, but because of their methods (e.g., Jack Abramoff). The perception (often inaccurately fueled by the media) is that all lobbyists do is broker influence, push buttons, and twist arms - and that was likely the case 30 years ago. That makes for sensational stories, but in reality that isn't how it works today. The No. 1 role of a lobbyist today is to educate and inform. Elected leaders do not have nearly the staff they need to stay apprised on issues and how those decisions they make impact entities.

12. Your role at Acadian had you on the road a lot and away from your wife and two boys. So what's the verdict on the new gig more or less time with the family?
Hard to judge right now, as I have been in "planting season" (client visits, proposal generation, etc.), to use an analogy from growing up on a farm. They all understand the seasonal nature of this type of work. Typically, when session would end in the summer, most lobbyists would hit the beach for a week or so. I would be back at Acadian, trying to catch up on all the issues on the business side that were sidetracked during session. I do think the quality of time we spend together will improve, as I have been rejuvenated professionally by this new chapter in my life.