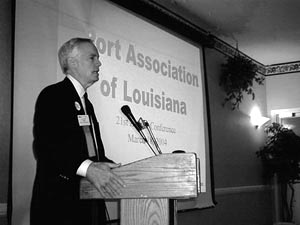 Noted Baton Rouge economist Dr. Loren Scott had just finished his annual economic forecast for Louisiana in late August and felt good about the state's financial footing in 2006. The continued strength of the oil and gas industry promised additional jobs, and the tourism, construction and housing markets were on solid footing. Then Katrina hit, and Scott was faced with a challenge he'd never encountered in decades of predicting Louisiana's economic future: How do you look into a financial crystal ball when the usual gauges ' such as state employment numbers and industry earning reports ' have been delayed or are in a state of constant flux?

"In the case of New Orleans, the model we used was the housing situation," says Scott. "The initial Red Cross estimate of houses destroyed was 267,000, and 75 percent of them are in New Orleans. So we argue that the strength and speed of the recovery will be limited by the availability of housing. If someone has eight restaurants, even if they open them back up again right now, they can't staff them because the workers don't have housing."

The housing formula generates sobering statistics on the post-Katrina economic outlook for the state. Even as Scott and his team of economists added 20,000-30,000 jobs for relief workers living in or commuting to New Orleans to their data, they arrived at a total of 337,000 jobs ' a number that effectively wipes out four decades of growth and puts the Crescent City at its 1963 employment levels.

Scott's estimates were also informed by personal experience. He has a townhouse in Old Metairie that took on more than 4 feet of water and has been back to the city numerous times to try and sort out insurance issues. And like so many other Louisiana residents, he has a hard time seeing a clear picture of the timetable for rebuilding efforts. "There's a limit on flood insurance, there's a shortage of contractors, problems with mold remediation â?¦ so when you look at the total number of homes damaged, it boggles the mind. Some people have asked what the margin of error is for this forecast, and we tried to hold our hands apart as far as we could. There's just so much uncertainty."

Even the staggering mid-80s Louisiana recession caused by the oil industry's downturn doesn't compare to Katrina's damage to the economy. "The size and geographic impact are the two main differences," says Scott. "The [oil] recession occurred over a six-year period, and we lost 9 percent of our jobs ' about 148,000 in the state. That's a huge hit, and it hit virtually every metro area in the state. Now we've lost twice as many jobs in about two months, but it's been like a rifle shot aimed directly at New Orleans."

With so much of the damage concentrated in the New Orleans region, Scott emphatically warns of a false sense of economic security in areas such as Baton Rouge, Acadiana and north Louisiana, which mostly emerged physically unscathed from hurricanes Katrina and Rita. "We're already doing surveys in Baton Rouge on how much business there relies on New Orleans, and it's a lot," he says. Suppliers from multiple industries have lost their New Orleans customer base, and the flip side is also true; restaurateurs in particular have scrambled to try and replace goods they bought from New Orleans. The overall ripple effect is significant. (Scott, for example, had four speaking engagements in New Orleans cancelled, and the status of his consulting contract with the city of Kenner is up in the air.)

While the metro New Orleans area staggers to get back on its feet, Scott says displaced residents and businesses will spur economic growth in other regions of the state. He estimates that Baton Rouge will be able to accommodate up to 50,000 new residents and 23,000 jobs, making the capital city the state's largest metropolitan area in 2006. Retail operations in Houma should also increase. Statewide, the already-booming construction industry will make further gains. And oil industry infrastructure repairs will bring increased employment in the Lafayette region.

"[Lafayette] has the servicing firms that are going to be charged with repairing structures in the Gulf of Mexico," he says. "As a result, we bumped up Lafayette by 4,000 jobs in 2006. It's going to take a minimum of one year to repair some of these pipelines and platforms. The Chevron Typhoon, a billion dollar facility, has been inverted. So if you're a fisherman, imagine a $1 billion bobber turned upside down."

While those repairs are under way, Scott says New Orleans' main economic engines ' the petrochemical industry, tourism, shipbuilding and the port system ' can only recover as fast as the housing situation in New Orleans improves. "Bollinger and Avondale ship yards and Lockheed Martin will come back, but they're struggling because they're labor-intensive and workers need places to live.

"The most problematic area is tourism," he adds. "Jazz Fest and Mardi Gras will come back at a smaller level to start, but the biggest problem is convention business. In the past, if you were a convention planner looking at dates between June and November [during hurricane season], there was always a little red flag. Now it's a big red flag."

Ultimately, Scott says federal relief money is the biggest question mark ' and he's discouraged by recent developments. "There are some recent proposals like the Louisiana Recovery Act, where the federal government will buy property and people will then get some of their wealth back. For some people, injection of federal money is going to be critical, because at least part of their wealth is built up in their homes. And we have to do something about the levee system. If you do want to rebuild, who's going to loan you money in an area that's been flooded when the levee system hasn't been fixed? But the unnerving thing is to watch the change [at the federal level] since we've gotten further and further away from the hurricane. The drop in sympathy level is palpable."