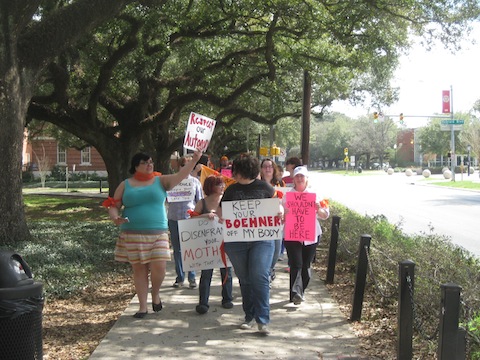 Donning glittery signs and Rosie the Riveter-esque head gear, more than a dozen pro-choice women - and a couple of men - took to the streets of Lafayette Saturday afternoon for a march against federal defunding of Planned Parenthood and other women's health programs.

The Walk For Choice march, modeled after the large-scale protests seen across the country Saturday in cities like New York and other major metros, was in response to the passage of a U.S. House budget bill amendment that bars all federal funding to Planned Parenthood, a nonprofit that provides abortions, contraceptives, cancer screenings and other preventative health services to women.

In addition to the Planned Parenthood federal budget cuts, the House on Feb. 18 voted 240-185, mostly along party lines, to eliminate "Title X," a budget provision that provides $317 million annually to family planning services nationwide, according to The New York Times: [The] continuing resolution would cut by 10 percent the Special Supplemental Nutrition Program for Women, Infants and Children, better known as WIC, which serves 9.6 million low-income women, new mothers, and infants each month, and has been linked in studies to higher birth weight and lower infant mortality.

"In Louisiana, we already have limited resources for women," said Lauren Vice, a UL visual arts student and one of the protest coordinators. "We want to introduce to the town that this exists, a group of people in a conservative area who believe in choice. We want our autonomy protected. It's ridiculous that we have to walk around town carrying glittery signs to ask for adequate health care. But I do like glitter."

The group decided against widely publicizing the local march beforehand - essentially because organizers weren't sure of the kind of feedback they would face in their hometown.

"A lot of women who wanted to come couldn't because they couldn't find a baby sitter for their children," Vice said. "They were afraid to bring their children because of the response [the protest] might bring."

What started with a little more than 15 people grew slightly during their trek from Girard Park to downtown Parc Sans Souci, taking in two additional stragglers who joined the "Keep your Boehner off my body" signs along the way.

"Activism isn't something we see here," said Lauren Hebert, 27, an online student of library science at the University of Arizona. "It's easy to feel isolated here.

ABC News reported on its website that Planned Parenthood already is banned from using federal dollars to fund abortions. The money the House voted to take away is used by Planned Parenthood for "family planning, birth control, medical and preventive services."

The Planned Parenthood budget amendment is awaiting a vote in the Senate.

Read more on the Planned Parenthood funding cuts and other measures in the bill here.