Councilman Brandon Shelvin appears to have had a helluva good time at last year's Bayou Classic - all on LCG's nickel. By Heather Miller

Picture a three-night stay at a luxury hotel along the river in New Orleans, coupled with the added ambiance of football fanfare that fills the Crescent City every year when rivals Southern and Grambling meet at the Superdome for the Bayou Classic.

Councilman Brandon Shelvin appears to have had a helluva good time at last year's Bayou Classic - all on LCG's nickel. By Heather Miller

Picture a three-night stay at a luxury hotel along the river in New Orleans, coupled with the added ambiance of football fanfare that fills the Crescent City every year when rivals Southern and Grambling meet at the Superdome for the Bayou Classic.

If you've never experienced that kind of getaway, City-Parish Councilman Brandon Shelvin could tell you about the hot spots to enjoy during this weekend filled with rich tradition for both universities' scores of fans.

In late November of last year, Shelvin spent three nights at the Hilton Riverside Hotel in New Orleans - all paid for with a Lafayette Consolidated Government-issued credit card in Shelvin's name, according to City-Parish Council travel records obtained by The Independent Weekly. The reason behind the four-day, three-night trip? Attending the 26th annual Bayou Classic Scholarship Jazz Brunch, an hour-and-a-half Louisiana Legislative Black Caucus event held Nov. 27, the Saturday after the Southern-Grambling match.

In terms of cost, Shelvin's $900 taxpayer-funded trip with no recorded LCG purpose other than the short brunch could pale in comparison to other council member adventures, such as City-Parish Councilman Don Bertrand's $2,500 week in Switzerland in October, representing the city with two area state lawmakers at the International Association of Francophone Mayors' annual conference.

But the District 3 councilman, amid a long list of legal battles stemming from his financial troubles, is one of only two councilmen to possess an LCG credit card - and the only one to have made charges on it for a non-LCG sanctioned trip.

City-Parish Council Chairman Kenneth Boudreaux is the other cardholder on the council, though an Independent Weekly review of council members' travel charges for the last three months of 2010 showed no irregular charges for Boudreaux or any other members. Boudreaux's only travel charges were incurred on his trip to the National League of Cities conference in Denver, which also was attended by other councilmen.
So why opt for an LCG credit card instead of the reimbursement system used by other council members?

"I think sometimes it's a principle issue," Boudreaux says. "Some individuals probably don't think they should be available or allowed; some do. To me it's the simplest thing. It keeps my council business separate from my personal business. Hopefully the person is in a position to properly manage what he or she is doing with it." 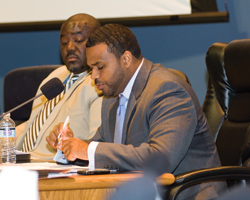 A resolution passed by the previous council in 2005 actually prohibits council members from possessing their own LCG-issued credit cards. Boudreaux says the resolution has not been amended since then, but maintains that a meeting with the city-parish attorney, the chief financial officer and the former council chairman concluded that changing the language to allow credit cards for council members was not necessary - as long as the outlined travel policies were followed.

Shelvin's three-night trip violated the council travel policy adopted in 2005, which states that lodging expenses are only reimbursable for the night before a government-related event is scheduled and departure from the activity the day after it concludes. His third night in New Orleans, according to the resolution, should not have been charged to LCG.

The councilman also swiped the card at a Henderson gas station to fuel up for the getaway, representing another minor infraction, according to the travel policy. Fuel prices are reimbursed by submitting mileage for the trip and cannot be charged directly to the card. The council clerk's office promptly subtracted Shelvin's inappropriate fuel charges from his per diem meal allowance in the overall expense report.

The finance department reviews the expenditures of LCG-sanctioned trips to ensure they coincide with travel policy, says City Parish CFO Lorrie Toups, but no one on the council or within the administration can approve or deny the expenditures based on the purpose of an elected official's travel. Say what?

Each council member is allotted $4,000 per year for travel, plus an additional $1,000 a year for conference registration costs, but Boudreaux says out-of-town travel procedure typically calls for accommodations to be booked in advance through the council clerk's office. It's unclear whether Shelvin even requested the travel expenses and hotel reservations before heading to New Orleans, or submitted the receipts to LCG after the charges were made. The council clerk's office declined to answer those questions.

To see how LCG's travel and credit card policies compare with other cities around the state, check out The Independent Weekly's blog, "The road less traveled."

The councilman's most recent questionable expenses add to an already lengthy list of financial and ethical issues uncovered by The Independent Weekly over the past year (see The Ind's March 2010 cover story, "The Problem with Brandon Shelvin"). The coverage also cast doubt on whether he met the residency requirements outlined in the parish's home rule charter when he ran for office in 2007.

"No one council member, even the chairman, controls the behavior, actions or activities of another," Boudreaux says. "When it comes to approval of travel, that's between the council members and what they share with the accounting department. Everything's monitored through our policies on purchases. Accounting determines what's acceptable; if not, you're going to be held accountable. I would encourage you to call [Shelvin]."

The Independent Weekly did call Shelvin on his cell phone. When reached, he hung up - again.