The Nov. 7 election isn't even over yet, but the 2007 gubernatorial race is gearing up and promises to be a barnburner. 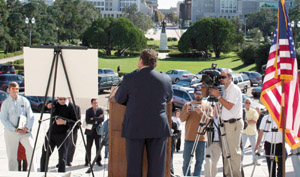 A 60-second radio spots plays over a loudspeaker on the steps of the state Capitol. Reporters, party reps, lobbyists and other politicos stare at nothing in particular as they listen to state Sen. Walter Boasso describe Louisiana government as "third world" and "pathetic." A few people laugh knowingly, and a narrator describes Boasso as a "success story."

The background music fades out, and a reporter asks if it's a swipe at Gov. Kathleen Blanco. Squinting from the sun and smiling at a question he probably knew was coming, Boasso, a Republican businessman from Chalmette, rejects the assertion and contends his GetItDoneLa.org Web site is the real reason for the dog-and-pony show. He just wants to provide a forum for people to get involved in Louisiana's recovery.

"I'm sorry to disappoint you all, but I'm not announcing that I'm running for governor today," Boasso says. The final word of the sentence ' today ' is enough to keep the political game moving. With qualifying less than a year away, Boasso refuses to say he is not running for governor, and this new nonprofit group could serve as a barometer.

Julie Vezinot, spokeswoman for the Louisiana Democratic Party, walks back to her car somewhat flustered. "How can he honestly say this is not a precursor to him running for governor?" she asks. "This is ridiculous."

Three days earlier, another Republican, Rep. Bobby Jindal of Kenner, gave a speech to the Lafayette Rotary Club. Lafayette isn't in his district, but Jindal doesn't mind stumping here, or in Houma or Gonzales or Thibodaux. When a Rotarian placed a "Jindal-for-governor" placard on the podium before his Rotary Club speech, Jindal didn't take the bait.

"We get that all the time, and we are flattered by it," Jindal says during a phone interview a few days later. "People ask quite a bit, and I know some people are doing polling. I think it's natural. People know I'm interested in that office."

Meanwhile, Blanco, a Democrat, is the only announced candidate for governor. She has been criticized for her handling of the hurricanes last year and demonized by members of her own party. The governor's poll numbers have slowly ticked upward since the storms ' they had no place else to go ' and she is determinedly running for re-election next year.

Lafayette-based fundraising consultant Cynthia Dupree is working exclusively for the governor and says Blanco has roughly $3 million and change in her campaign war chest. About $2.4 million is detailed in the campaign financial forms on record with the state, while the rest has been raised in the "five or six" events held since Aug. 1, she says.

Each event had a goal of $100,000, Dupree says, and even if the target isn't reached during one function, it's usually picked up in another. The grand total would have been significantly higher if not for Katrina and Rita, because Dupree says Blanco shut down all fundraising in the face of the storms. "It had been a year and four months since we did any active fundraising. We left about $1 million on the table last year. At this point, we're just trying to play catch up."

From within her own party, Blanco's most significant challenge appears to be coming from Public Service Commissioner Foster Campbell, a Shreveport native and former member of the state Senate. "I have not officially announced I'm running yet, but I have every intention to run," Campbell says. "I even have a plan already. Blanco doesn't have a plan. Jindal doesn't have a plan."

Campbell's plan involves a concept he has been pushing for years with no success. He wants to tax all the foreign oil that moves through Louisiana, which would generate billions for the state's coffers. As for his own war chest, Campbell says he has raised about $400,000 to date and that tally will top $1 million by the end of the year when campaign finance reports are due. But it likely won't be enough to sway Democratic loyalists.

Other Democratic names that have cropped up include those of state Rep. Cedric Richmond, a Crescent City Democrat and leader of the Legislative Black Caucus. Additionally, former Congressman Chris John, a Lafayette Democrat, says he's in the race if Blanco should drop out.

Vezinot says the state party is putting all its resources behind Blanco, and the fact that Louisiana is holding one of the nation's three gubernatorial elections in 2007 may force national interests to get involved as well. As for the status of Blanco's traditional base that pushed her over the edge during the first election ' African-American voters in New Orleans proper ' that's still to be determined.

"That's the piece of the puzzle that everyone is focused on ' the turnout in New Orleans," says Wayne Parent, chair of the political science department at Louisiana State University. "That's where everyone suspects the difference will be. If it's a high turnout, where it was pre-Katrina, then things haven't changed much. But if it's off, Democrats are going to have a hard time."

Although there have already been a round of New Orleans municipal races and statewide elections, Parent says the Nov. 7 ballot will be the ultimate litmus because the storied political machine of embattled U.S. Democratic Rep. William Jefferson will force voters out of every nook and cranny, the way Blanco's gubernatorial bid would.

"We're about to learn a whole lot," Parent says. "I think the gubernatorial election will be full steam ahead after these elections, and we'll begin to see the lay of the land, and donors and major players will start making their moves."

Although Parent says a rematch of Blanco and Jindal's 2003 runoff "isn't a sure thing," he admits it's the safest money in the game right now. When pushed, Jindal doesn't dispute the assertion either and says his decision will be officially announced early next year. Even the Louisiana Republican Party thinks it's a sure bet, as it continues branding everything from bumper stickers to Web sites with the early elephant mantra of 2007: "Don't Blame Me, I Voted For Jindal." It seems everyone is ready for the race except Jindal.

"Yeah, despite what they say, I keep telling my family not to put those stickers on their cars," Jindal says.

At last count, Jindal had roughly $2.1 million in his congressional bank account, but he can't take it with him if he runs for governor due to campaign finance laws. That may explain his recent spending habit. Even though he has no real competition, Jindal says his campaign would spend $700,000 during the final weeks of his congressional race ' and that's on top of the $1 million Jindal already spent during the second quarter, largely on a massive media buy.

As for Boasso, he formed an official election committee in February and had only $19,000 cash-on-hand in the most recent report filed at the turn of year. Boasso, however, is independently wealthy, and he has tapped Jeff Crouere, a conservative political commentator from New Orleans and former executive director of the Louisiana Republican Party, as a point man for GetItDoneLa.org. Asked if he'll be doing consulting work for Boasso, Crouere gives what might be a slight tip of the hat.

"We'll be doing some things together really soon," he says.

James Quinn, who serves as executive director of the state GOP, admits Boasso and Jindal would be chasing after the same base if they both ran for the post, but there's an effort under way behind the scenes to have all Republican interests coalesce behind one candidate. That goal, though, is quite lofty, and it's doubtful that Jindal, Boasso and Blanco will be alone for long.

"When push comes to shove and all these people have to form a committee and select a treasurer and hire a manager and start looking at polls, it'll thin out," Quinn says. "But I think we'll be seeing a lot more people floating a run over the next few months."