Good-natured Henry Mouton spent much of his adult life fighting for a cause, and he may spend the rest of it fighting for his freedom.  By Heather Miller

News of an overzealous letter-writing campaign to public officials wouldn't be a noteworthy item for those who knew Henry Mouton; it was a trait perfectly attuned to a man who often made his way into prominent social circles - always a new cause in hand. 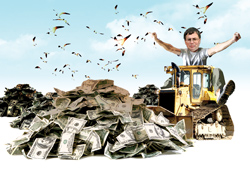 Good-natured Henry Mouton spent much of his adult life fighting for a cause, and he may spend the rest of it fighting for his freedom.  By Heather Miller

News of an overzealous letter-writing campaign to public officials wouldn't be a noteworthy item for those who knew Henry Mouton; it was a trait perfectly attuned to a man who often made his way into prominent social circles - always a new cause in hand.

Federal prosecutors are now accusing the former state Wildlife and Fisheries commissioner of taking one crusade against a controversial New Orleans landfill all the way to the FBI - and receiving almost a half a million dollars from a rival landfill owner in return.

Forty-eight minutes after Mouton sat down with two Independent Weekly staff members Feb. 25 for a lunch meeting to discuss his latest environmental initiative, The Times-Picayune broke on its website that Mouton had been indicted the same day on federal charges of conspiracy, receiving illegal payoffs and lying to federal agents. 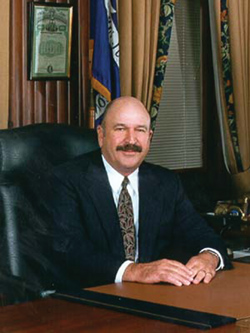 If convicted, the 54-year-old Lafayette resident faces up to 55 years in federal prison, $2 million in fines and three years of probation. U.S. Attorney Jim Letten says he also is pushing for Mouton to repay the $463,970 he allegedly was paid from the landfill owner.

The indictment, announced in a press release from Letten's office, doesn't identify the rival landfill that funded the alleged kickbacks. However, The Times-Picayune has linked Mouton to New Orleans' River Birch landfill owner Fred Heebe, one of numerous parties under federal investigation for possible ties to government corruption in Jefferson Parish.

It's not yet clear whether Mouton's indictment was merely a consequence of the feds' widespread probe of Jefferson Parish and the River Birch landfill - or if the ongoing investigation will uncover more on Mouton's ties to Jefferson Parish government.

But the base of Mouton's political connections points to one key person in his life - former Gov. Mike Foster - a father figure to Mouton who appointed him to the Wildlife and Fisheries Commission in 2003.

Foster, who happened to be dining at a nearby table when Mouton met with The Independent Weekly, says in a phone interview that the two met when Mouton was a child.

"I had a camp on the coast, and Henry would just wander in and visit," Foster recalls.

Foster says it was his idea to appoint Mouton to the commission, citing Mouton's love for outdoors and ties to hunting, fishing and the Gulf Coast Conservation Alliance, now known as the Coastal Conservation Association of Louisiana.

CCA Executive Director David Cresson confirms Mouton served as president of the organization in the early '90s and later became a "life member," though he hasn't been involved in the nonprofit's leadership in almost 20 years.

"Mr. Mouton was known for a number of years as an active outdoorsman who shared with other CCA members a strong interest in marine conservation," Cresson says.

According to several sources, Mouton also is widely known for expansive fundraising on Foster's behalf, quickly emerging after Foster was elected as an aggressive name-dropper when lobbying for his causes - many of them nonpolitical. Mouton was heavily involved in fundraising for juvenile diabetes research and the nonprofit Honor Air, which flies World War II veterans from Louisiana to Washington, D.C., to visit the World War II Memorial.

"He's always had an issue he's interested in. [The landfill opposition] looked like just another big project," Foster says. "Frankly, people that know him get five or six emails from him every day. That was Henry."

Mouton's most recent pursuit, according to countless emails he circulated to Foster, state Sen. Mike Michot and others, targets BP and what he describes as shoddy cleanup efforts in Grand Isle and along the Gulf Coast. Though an outdoorsman and environmental advocate, Mouton also was unwavering in his conservative political views - ideals he loved to debate with anyone who was willing to do so.

"He always had a project, always had a cause," the former governor continues. "I hate to see this happen. It's a surprise to those of us who knew him. It's hard to understand."

The indictment against Mouton claims he used his position as a commissioner to go far beyond writing to congressman, also reportedly trashing the old Gentilly landfill in letters he wrote to the U.S. Environmental Protection Agency, the Army Corps of Engineers and the FBI.

Times-Picayune political columnist Stephanie Grace speculates Mouton's commissioner title didn't bear much weight in his reported efforts to close the landfill - but that didn't stop Mouton from using every resource within reach to rally support.

The self-made stationary prompted the commission to pass a resolution in January 2006 establishing a protocol for correspondence to prevent misconceptions that a commissioner is writing on behalf of the entire commission or with the backing of the department secretary.

"He had a lot of interests, but the question is, did he ever have a real job?" Foster says. "I don't know."

Mouton said in the recent lunch meeting he sold his share of an air conditioning and heating company, though it is unknown whether it's the same company, Star Service Inc., for which Mouton lobbied to land a $948,000 contract with the Jefferson Parish School Board in 2000, as reported in The Times-Picayune.

Like Foster, several who know Mouton say they are shocked to hear of the feds' accusations against him.

"He's always trying to help someone and put good people together," says Lafayette advertising executive Paul Eason, who describes Mouton as a good-natured man who was easy to talk to. "His heart was in the right place. He's a nice guy. I'll never believe he was a bad person. I hope and pray he gets through this for [him] and his family."

Mouton, who declined to comment for this story, has hired as his defense attorney Mary Olive Pierson, a well-known Baton Rouge lawyer who represented former state Sen. Greg Tarver, former Agriculture and Forestry Commissioner Bob Odom and former Livingston Parish Councilman Robert Ringo in their respective corruption cases. Tarver was acquitted, Odom's charges were dropped and Ringo got six months of home detention after admitting he accepted a $17,000 bribe for his vote on a landfill contract.