Jackie Lyle reflects on the life of the late priest, a close friend to her and many others in Acadiana.

Monsignor Harry Benefiel passed away in the wee hours of March 13, 2011. He lived a very robust 90 years, and along the way, became an important part of the lives of so many, including mine.

He has been part of our family for decades. He and my dad were friends before my parents married, and long before he became a priest. He was appointed pastor of St. Pius X Church when I was in fifth grade and when Kaliste Saloom was still a country road. That's where our friendship began. He was never my spiritual adviser, but always a great companion. 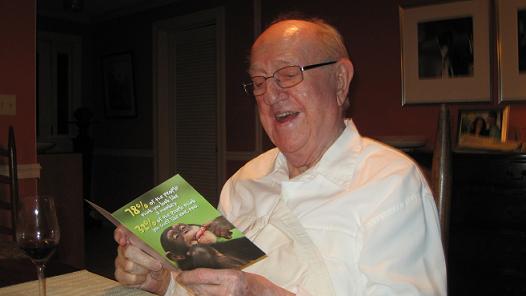 All of the kids in the neighborhood knew him, he knew them, and he knew what was going on with just about everyone, Catholic or not. My childhood friend, Mark Murphy, emailed me his sympathy on the news of Benefiel's death, saying, "He was a special man and as close to being my priest as a non-Catholic can have."

He was a tyrant of the St. Pius playground, fussing at rowdy kids and threatening young lovers. At the end of the day, though, he was a sanctuary for many in our neighborhood who needed refuge from the woes of growing up, as he was at his later pastoral appointments in Broussard and Eunice.

He was perhaps one of the people happiest for me when I met my husband, Conrad Comeaux. They became fast friends, and our friends became his friends. As our children entered the world, their relationships with Father Benefiel also blossomed. When our house was full of kids, Benefiel would pick and tease, and they would play right along with his game. He frequently feigned exasperation with me, but clearly valued my talents. From time to time, we even co-authored blessings that he was to deliver at public occasions, which I consider a real feather in my cap.

Benefiel loved a good meal, so much so that our most frequent encounters were feasts, the Eucharistic sort and the kind that often gathered up our extended family - aunts, uncles, cousins, my grandmother and friends. When it came to food, he and I shared a secret code. When Benefiel asked if I wanted him to say Mass at our house on a given Sunday morning, I knew it was a message for me to make homemade biscuits. Turn the phone off, heat up the oven, celebrate Mass, put the coffee on and bake those biscuits.

We were surely not without our differences. In the dark days of the Diocese of Lafayette, when the crimes of Gilbert Gauthe unfolded, we clearly stood on opposing turf: he, as a Diocesan official, and me as a staff member at the Times of Acadiana - the publication that made public the pedophile who was a priest. At a Sunday lunch at the home of my parents, we both gave rather heated voice to our positions and that was that. We revisited the topic from time to time, but it never stood in the way of the companionship we shared.

He's been there for everything for so many: birthdays, anniversaries, weddings, baptisms, successes and failures. He was at my side for the funerals of my closest relatives, including my mother's. He and I sat at his coffee table as we both planned my fabulous Aunt Phyllis's funeral, weeping together.

His was a very full life that ended shortly after he declared for the last time, "I'm throwing in the towel." I am so happy I was there for the game.