A popular indigenous music series is rocked by the abrupt departure of its founder.  By Walter Pierce

Last Friday Mouton got a haircut, a fitting change that roughly coincided with his less-than-harmonious departure - acrimonious may be going too far, but not by much - as director of Louisiana Crossroads, the indigenous-music concert series he envisioned and (almost) single-handedly founded more than a decade ago. Crossroads grew from a great, small idea to promote Louisiana music and culture via concerts broadcast live on KRVS into a beloved franchise featuring the biggest names in Louisiana music (and beyond) performing at multiple venues in cities around south Louisiana including most recently the new James D. Moncus Theater at the Acadiana Center for the Arts, which is where the trouble for Mouton began. 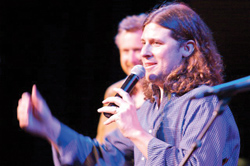 A popular indigenous music series is rocked by the abrupt departure of its founder.  By Walter Pierce

Last Friday Mouton got a haircut, a fitting change that roughly coincided with his less-than-harmonious departure - acrimonious may be going too far, but not by much - as director of Louisiana Crossroads, the indigenous-music concert series he envisioned and (almost) single-handedly founded more than a decade ago. Crossroads grew from a great, small idea to promote Louisiana music and culture via concerts broadcast live on KRVS into a beloved franchise featuring the biggest names in Louisiana music (and beyond) performing at multiple venues in cities around south Louisiana including most recently the new James D. Moncus Theater at the Acadiana Center for the Arts, which is where the trouble for Mouton began.

Mouton says disagreements with the AcA staff over a planned television component of Crossroads had him ready to pull his hair out. Instead, he resigned. And got a haircut.

Mouton and AcA Executive Director Gerd Wuestemann maintain a creative and professional detente. Neither is willing to speak publicly about the falling out that precipitated Mouton's departure.
"So many people contributed to this project over the years," Mouton says diplomatically. "I'm super proud of all the work we've done, and I'm looking to do more work with music and culture through my role as executive director of Louisiana Folk Roots. But sometimes in creative projects you do get to a crossroads and different visions come into play."

Mouton's abrupt departure from Crossroads - his last day was Friday, March 5 - caught many by surprise.

"Total disbelief" is how slide guitar virtuoso and longtime friend Sonny Landreth sums up his reaction. "I'm very disappointed, and it's a tremendous loss, really to our community and all who care about promoting and enriching the culture here."

Mouton's exodus is also not sitting well with the series' biggest partner, the Lafayette Economic Development Authority. According to the terms of the contract between LEDA and the AcA, the former contributes annually to Louisiana Crossroads. For the first 10 seasons LEDA contributed $15,000 annually and doubled the contribution for the current season, which closes this month with performances by Buckwheat Zydeco. LEDA gave an additional $30K this year for the development of the television version of Crossroads. The concert series alone costs about $225,000 per season to produce.

President/CEO Gregg Gothreaux says LEDA will reevaluate its relationship with the franchise and the AcA when the contract expires at the end of this year.

"I'm deeply disappointed that Todd has left, is no longer involved in Louisiana Crossroads. We worked together, both LEDA and Crossroads/AcA and the two of us, for over 10 years, establishing a brand for Acadiana's music and supporting the arts in Acadiana. To think that that collaboration is over is obviously extremely disappointing," Gothreaux says. "Officially we do have a contract that lasts until December 2011, and so when the contract comes up at the end of this year, or late this year, the board will consider whether to participate in Crossroads in the future."

As Gothreaux indicates, the decision about extending LEDA's financial commitment to Crossroads belongs to the agency's board of directors. But there, too, Gothreaux points to a caveat: "Paula Carson's my chairman, and she's equally disappointed," he says.

Crossroads was diminutive at its inception a decade ago, playing to small, appreciative crowds seated on folding chairs in the old, cramped Acadiana Arts Council building on the corner of Lee Avenue and Main Street downtown. 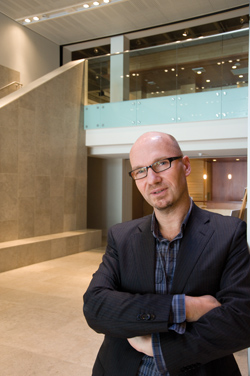 The AAC eventually outgrew the building, moved into its $10 million state-funded arts center on Vermilion Street and changed its organizational name to the Acadiana Center for the Arts to jibe with the building in which it operates. In the meantime, Crossroads moved to Vermilionville, and branched out to offer companion concerts at the Sliman Theatre in New Iberia as well as in Lake Charles.

The KRVS simulcasts, an important component that has helped Crossroads cast a wide net, continued throughout.

Once the Moncus Theater at the AcA was complete last fall, Crossroads set up housekeeping. The AcA owns the rights to the franchise and, by that point, was the locus of activity for the concert series.

Like Mouton, Wuestemann is loath to publicly discuss details of any animus that may have arisen over the series. The German-born classical guitarist was the driving force in shepherding the arts center's new theater into existence, and he understandably feels a sense of responsibility for and, yes, ownership of its programming. Leaning on the innate salesman in every non-profit executive, he prefers to focus on Crossroads' future.

"There isn't much to be said. Our Crossroads director decided to make a change and resigned his position at the AcA, and we're moving forward with the program; we're excited about some new horizons, some new ground-breaking with the program," Wuestemann says. "Crossroads is stronger than ever."

Citing proprietary information and contracts still unsigned, Wuestemann also declines to discuss details of the planned pilot for a Louisiana Crossroads television series. The AcA obtained a $125,000 state grant to bankroll the TV production. And while Wuestemann acknowledges - off-handedly - that the television component was ultimately what led to the falling out with Mouton, he disputes, as some close to the situation have suggested, that it had anything to do with creative control. "I have never, not once, involved myself creatively with Louisiana Crossroads," he says, characterizing the situation as "an administrative issue" but saying little more.

"Todd Mouton is Crossroads," says Landreth. "It was his concept, his passion and dedication that drew the forces together for funding. He contacted all the musicians directly himself. In terms of production and financial oversight, it's going to take four people to replace him, and they won't be as efficient."

Like LEDA's Gothreaux, Landreth, who has performed Crossroads in the past, says Mouton's departure has given him pause.

"Would I do it again? I'll definitely consider it," the guitarist admits. "I don't usually get in the middle of disputes because there's always two sides to a story, but this is one where I felt like I have to stand up."

Mouton remains a presence at the AcA; as executive director of Louisiana Folk Roots, a cultural non-profit that will host its annual Dewey Balfa Cajun & Creole Heritage Camp in April at Chicot State Park, he has an office at the arts center. He and Wuestemann pass each other in the halls.

"Crossroads was headed for a transition anyway," Mouton says, a sigh feathering his voice, "and it turned out to be one for me as well." 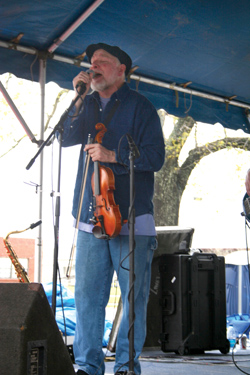 On March 8, surrounded by Eunice's drenched Mardi Gras revelers, David Greely said a tender and tearful goodbye to Steve Riley and the Mamou Playboys - the band he and Riley founded more than 20 years ago.

The divorce is a necessary evil in order for Greely to maintain his hearing. Two years ago, the fiddler learned he was losing his ability to hear high frequency sounds. He suffers from a condition called tinnitus, meaning he hears a constant ringing that drowns out subtle tones and cues.

"You know what cicadas sound like in the summer?" Greely asks. "That's what it's like all the time."

He says the sound is still low enough to ignore, but playing in clubs aggravates the problem, and it sometimes takes three days for the ringing to subside to a normal level. He can no longer play at the sound level clubs and dance halls require, and his retirement from the Playboys is actually a retreat into acoustic music.

"There are a lot of situations where it's actually kind of unusual to set up bass and drums and be as loud as a Cajun bandstand is," he says. "I love exploring Cajun music that's more designed for house music. There's a whole huge area of Cajun music that is designed for that and is really beautiful. It has its own kind of energy for sure; it's not all mellow, but it's joyous, gorgeous music played on acoustic instruments."

Where many successful Cajun musicians are born into the culture and the art form, Greely studied it from a distance. The Baton Rouge native had the fascination and lineage, but no immediate connection. While living in San Antonio, he "bluffed" his way into a gig at Boudreaux's restaurant.

His stint at the restaurant was the catalyst for an increasing passion for Cajun music and culture that Greely continues to feed through constant research and at least two hours of daily practice. Although this new chapter means he will have the opportunity to explore new elements of his craft, Greely says he'll miss his old audience.

"A Cajun dance hall audience is the most entertaining thing to people on the bandstand. Like when we play at Pat's in Henderson, there's not too many hipsters out there. It's all down-home folk and, man, they have a blast, and they're just such characters," he says. "Just about every time I play, I get overcome with laughter, and I can't play on one song or another."

Greely may have started out faking it, but he made it and is still making it and says he hopes to keep making it for as long as he can.

GumboJet, GreelySavoyduo, and Marce LaCouture and David Greely are his current acoustic projects and the names to look for when longing for the Balfa-inspired whine of Greely's fiddle.

"I'm having more fun playing music now than I ever have. I work on it constantly. I'm still involved with it - obsessed with Cajun music. I love it more than ever," he says. "I've got 20, 30 years to go, if I'm lucky, and I want to be able to play music all that time, but if I keep punishing my hearing, I'll have to quit."