The Louisiana Family Forum is focusing its redistricting efforts on the Louisiana Senate - and it promises to be a bumpy ride.  By Jeremy Alford

Political livelihoods are officially on the line. Lawmakers convened a special session over the weekend to tackle redistricting, a policy extravaganza held only once a decade where the lines demarcating one elected office from another are redrawn, shifted or entirely abolished based on the latest U.S. Census findings.
Congressional seats will be dramatically reshaped this go around - including one tossed out (that's a necessity, since Louisiana's population grew by only 1.4 percent from 2000 to 2010, one of the smallest increases in the nation) - and the impact will trickle down to everything from the Public Service Commission to city council seats. 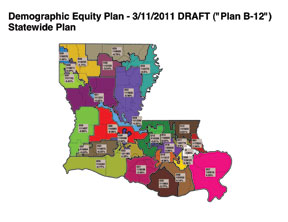 The Louisiana Family Forum is focusing its redistricting efforts on the Louisiana Senate - and it promises to be a bumpy ride.  By Jeremy Alford

Political livelihoods are officially on the line. Lawmakers convened a special session over the weekend to tackle redistricting, a policy extravaganza held only once a decade where the lines demarcating one elected office from another are redrawn, shifted or entirely abolished based on the latest U.S. Census findings.
Congressional seats will be dramatically reshaped this go around - including one tossed out (that's a necessity, since Louisiana's population grew by only 1.4 percent from 2000 to 2010, one of the smallest increases in the nation) - and the impact will trickle down to everything from the Public Service Commission to city council seats.

Of course, legislators will also have a hand in reconstituting their own districts in the House and Senate. With 105 members, the House is a tall order that's difficult to wrap one's head around at times. The Senate, however, has but 39 members and should be ripe for a spirited and thoroughly interesting, engaging public debate.

Yet even with the special session upon us, the only thing coming out of the Senate is the Simon & Garfunkel-patented sound of silence. That doesn't mean there isn't a good bit of jockeying going on. "I was handed a map by the Senate leadership not long ago and was told this was the plan," says one lawmaker. "I was under the impression we were supposed to be doing this in public." 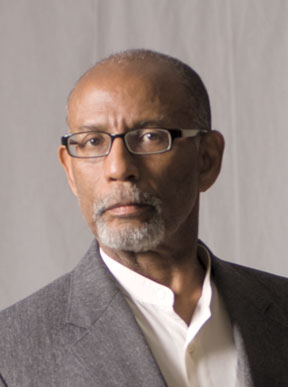 That same sentiment is fueling a plan being pushed by the unlikely team of the Louisiana Family Forum, an influential Christian advocacy lobby that more than leans Republican, and Sen. Elbert Guillory, an African-American Democrat from Opelousas. "We may not be a traditional pairing,"Guillory says, sitting underneath a stuffed deer head mounted on a wall of LFF's Baton Rouge offices. "But it's a good marriage. We agree on the principles."

The two factions first drafted their joint plan, which Guillory calls the "Demographic Equity Plan" and LFF brass calls the "Guillory Plan," last year. The latest version of the proposed Senate map was just made available to this publication days before the special session convened.

Among the principles, or rather perceptions, they agree on is that there's a "secret plan" being tossed around the Senate. Like the other lawmaker interviewed for this story, Guillory says he, too, was handed a map showing proposed lines. "I was told the Senate president is taking care of the Senate plan," he says. "I also suspect the public will never see this plan until the last minute. These are the kinds of plans put together by politicians wholly to protect their fiefdoms."

While that explanation works on practically any level of local, state or national politics, Senate President Joel Chaisson, a Democrat from Destrehan, is term-limited and barred from seeking re-election. Moreover, Chaisson says he'll "absolutely" make sure every plan receives a full hearing. "There is certainly a Senate plan that has been worked on by senators with their preferences following all of the public meetings we've held recently," says Chaisson. "There's got to be a starting point."

At the time, he said he was still working on his own final Senate plan, which was to be filed just 48 hours prior to the session's opening Sunday. 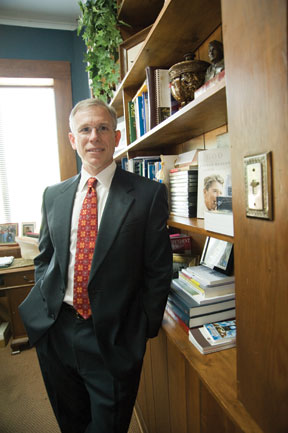 LFF President Gene Mills, an ordained minister and part-time motivational speaker, says Chaisson's status as a term-limited lawmaker is among the reasons his group and Guillory are able to propose such dramatic changes. "That's really the only reason we can do this," Mills says. "Term limits are taking people out."

In fact, along with Chaisson's, the LFF plan seeks to likewise obliterate the district of Sen. Rob Marionneaux, a term-limited Livonia Democrat who chairs the tax-writing Revenue and Fiscal Affairs Committee. For what it's worth - probably a lot - Marionneaux has another seat on the Senate and Governmental Affairs Committee, which will lead the redistricting efforts in the upper chamber. Four other members of the Senate are term-limited as well, including Sens. Butch Gautreaux, D-Morgan City; Joe McPherson, D-Woodworth; Mike Michot, R-Lafayette; and Willie Mount, D-Lake Charles.

While the new LFF plan does little to alter north Louisiana, it proposes all kinds of drama for south Louisiana. It dilutes the power base long held by New Orleans, redistributes African-American districts (again, away from the Crescent City) and, at least on paper, would make it difficult for Democrats, particularly white Democrats, to win. When asked about the impact on his own party, that his plan could further deteriorate what little lock Dems have, Guillory just shrugs.

"It very possibly does," he says. "But we in the black community need to decide who should truly represent us. There needs to be new relationships between African-Americans and the new powers that exist."

Who or what is the new power base? Well, according to the most recent Louisiana Survey, released last week by  LSU's Public Policy Research Lab, approximately 58 percent of respondents identified themselves as "evangelical or born again." That segment of the electorate has also been credited with Gov. Bobby Jindal's historic win and the success of former President George W. Bush.

So what does this new power base want? For starters, the LFF plan reverses the count along the eastern I-10/I-12 corridor. Right now, there are 10 Senate districts in metro New Orleans and another seven in the region from Baton Rouge to Slidell. The LFF plan reverses those counts, adds a new white district to Baton Rouge proper and another to New Orleans. And it's in the Big Easy that LFF proposes the most significant changes. Instead of five minority districts for the city proper, the proposal calls for three minority districts and one white district. The way LFF's new map is rendered, that would pit Sen. J.P. Morrell against Sen. Cynthia Willard-Lewis, both Dems.

Elsewhere in south Louisiana, Terrebonne and Lafourche parishes would have their own Senate seats and Jefferson would have a stronger hold on the area near southern St. Charles, which is currently Chaisson's district and home base of support. There are obviously a lot of moving pieces, and those observing from the outside are just as skeptical of the plan as its sponsors are of them. "People like Mr. Guillory and the Family Forum, they have agendas," says Chaisson.

Guillory laughs at the suggestion and, first and foremost, insists he'll be a Democrat for life. But his agenda is out in the open. "The rest of Louisiana can no longer be a junior partner to New Orleans in governing the state," he says. As for his own district, he gets what he wants out of the LFF plan, which means gaining a little more ground in the St. Landry area and remaining a southwest Louisiana minority district.

Mills agrees, too, and readily coughs up what he calls his agenda. "This plan has merit," he says. "There's a passivity in the Senate that's shocking to me. We want more public input. That's why we're putting out this plan. And we admit, too, that this plan could change another 20 times. Nothing is set in stone."