Like swooning youngsters on the Mad Tea Party ride at Disney World, members of the Lafayette Charter Commission continue to spin wildly as the clock ticks down to their mid-April deadline. 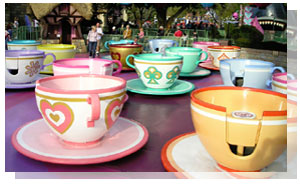 Like swooning youngsters on the Mad Tea Party ride at Disney World, members of the Lafayette Charter Commission continue to spin wildly as the clock ticks down to their mid-April deadline for making a recommendation to go before voters. Mid-stream the commission was headed toward creating separate charters for the city and the parish but abandoned that tack a little over a month ago and began charting a course toward limited autonomy - control only over LUS. Recently the commissioner moved toward giving the city control over all city-related matters.

Now The Advocate is reporting that the prospect of the city of Lafayette salvaging complete autonomy, which seemed all but lost a month ago in this Alice in Wonderland political drama, may still be possible as sentiment on the commission is again swinging toward separate charters. The first order of business will evidently be appealing to the beneficence of the City-Parish Council for a nine-month extension so that commissioners who favor full and unbridled self-determination for the city can lobby their recalcitrant colleagues.

Commissioners voted 7-2 Monday evening to ask the council for an extension, according to The Advertiser. This morning, council Clerk Norma Dugas informed council members via email that it has "now determined that additional time will be needed past the April 13 deadline" and that a pair of special meetings has been set to settle the matter.

The first special meeting will be held Tuesday, March 29 at 5:30 p.m. for council members to vote on an introductory ordinance granting the extension. If it passes, and that's far from guaranteed, it would go to a final vote on April 12. If the intro ordinance fails, commissioners will likely be scrambling to settle on what will go before a parishwide vote this fall.