A Hilliard University Art Museum exhibit has been shortlisted for a prize. By Sue Schleifer

Two weeks ago, Mark Tullos (above), director of the Paul and Lulu Hilliard University Art Museum, learned that the museum's current exhibit, Say It Isn't Faux!, is on a short list for the first Annette Giacometti Prize for the Intellectual Property Rights of Artworks and Artists...

A Hilliard University Art Museum exhibit has been shortlisted for a prize. By Sue Schleifer 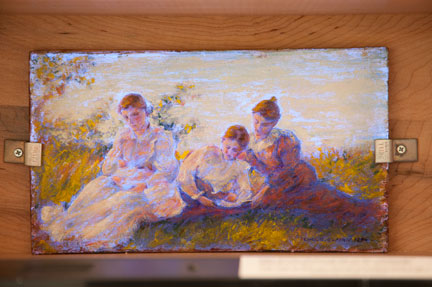 Two weeks ago, Mark Tullos (above), director of the Paul and Lulu Hilliard University Art Museum, learned that the museum's current exhibit, Say It Isn't Faux!, is on a short list for the first Annette Giacometti Prize for the Intellectual Property Rights of Artworks and Artists. This prize, to be awarded in May, will reward an exhibition, work or any initiative promoting the rights of artists. The winner of the prize from this Parisian foundation also receives a grant of 10,000 euros (almost $14,000).

Say It Isn't Faux! is an interpretive exhibit. It contains only three pieces of art, and one is a fake. The forged painting of "Three Women" by American impressionist Charles Courtney Curran was donated to the museum in September 2010 by a man who portrayed himself as a priest. Prior to showing up at the museum in his red Cadillac, he sent a letter to the museum explaining his desire to donate the painting in his mother's memory and included what looked to be authentic provenance documentation on the painting. These documents are included in the exhibit along with the small painting.

Exhibit goers may examine the painting and then shine a black light on it to see what the museum curator and staff witnessed soon after they accepted the piece. They saw how under ultraviolet light, the painting fluoresced. This is an indication that contemporary paper and paints were used to produce the painting.

The exhibit was in the final planning stages when the forgery landed at the museum. This became the icing on the cake for the interpretive exhibit made up of 12 informative and educational panels. The panels describe the importance of provenance research to a collection. One panel outlines "10 questions owners should ask when acquiring or owning art."

The Hilliard museum has spent the past two years studying and documenting its own collection. It identified six donated paintings for which there was a gap in the provenance. The museum staff sent information on these paintings to the International Foundation for Art Research (IFAR), a not-for-profit educational and research organization dedicated to integrity in the visual arts. IFAR researchers concluded that none of the six paintings "had a problematic WWII-era ownership history." Two of these paintings are on view in the exhibit. 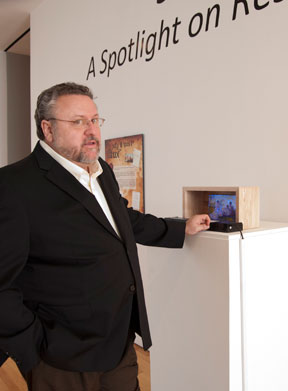 News of the fake painting has traveled far beyond Acadiana. Stories have been written about the mysterious donor and his long career of forging and donating paintings to museums throughout the United States. Recent stories have appeared in The New York Times, The Art Newspaper in London, The Guardian from the UK and many more publications. The television program 60 Minutes contacted Tullos for information. The show's producers are researching whether they want to produce a story on the illusive forger. The Financial Times, in a Jan. 21 article, describes how it tracked down "Mark Augustus Landis, the man responsible for the longest, strangest forgery spree the American art world has known."

The Say It Isn't Faux! exhibit will be up until April 30. While at the museum, don't miss the Dale Kennington Mythologies exhibit on the first floor.