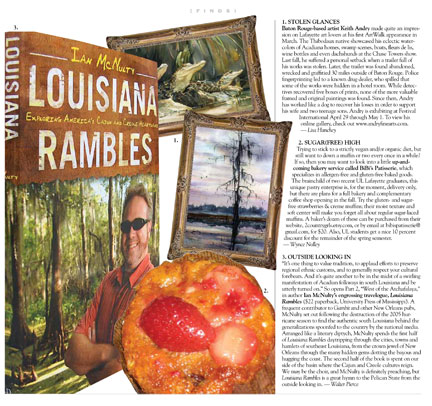 STOLEN GLANCES
Baton Rouge-based artist Keith Andry made quite an impression on Lafayette art lovers at his first ArtWalk appearance in March. The Thibodaux native showcased his eclectic watercolors of Acadiana homes, swamp scenes, boats, fleurs de lis, wine bottles and even dachshunds at the Chase Towers show. Last fall, he suffered a personal setback when a trailer full of his works was stolen. Later, the trailer was found abandoned, wrecked and graffitied 30 miles outside of Baton Rouge. Police fingerprinting led to a known drug dealer, who spilled that some of the works were hidden in a hotel room. While detectives recovered five boxes of prints, none of the more valuable framed and original paintings was found. Since then, Andry has worked like a dog to recover his losses in order to support his wife and two teenage sons. Andry is exhibiting at Festival International April 29 through May 1. To view his online gallery, check out www.andryfinearts.com. - Lisa Hanchey

SUGAR(FREE) HIGH
Trying to stick to a strictly vegan and/or organic diet, but still want to down a muffin or two every once in a while? If so, then you may want to look into a little up-and-coming bakery service called BiBi's Patisserie, which specializes in allergen-free and gluten-free baked goods. The brainchild of two recent UL Lafayette graduates, this unique pastry enterprise is, for the moment, delivery only, but there are plans for a full bakery and complementary coffee shop opening in the fall. Try the gluten- and sugar-free strawberries & creme muffins; their moist texture and soft center will make you forget all about regular sugar-laced muffins. A baker's dozen of these can be purchased from their website, 2countrygrls.etsy.com, or by email at [email protected], for $20. Also, UL students get a nice 10 percent discount for the remainder of the spring semester. - Wynce Nolley

OUTSIDE LOOKING IN
"It's one thing to value tradition, to applaud efforts to preserve regional ethnic customs, and to generally respect your cultural forebears. And it's quite another to be in the midst of a swirling manifestation of Acadian folkways in south Louisiana and be utterly turned on." So opens Part 2, "West of the Atchafalaya," in author Ian McNulty's engrossing travelogue, Louisiana Rambles ($22 paperback, University Press of Mississippi). A frequent contributor to Gambit and other New Orleans pubs, McNulty set out following the destruction of the 2005 hurricane season to find the authentic south Louisiana behind the generalizations spoonfed to the country by the national media. Arranged like a literary diptych, McNulty spends the first half of Louisiana Rambles daytripping through the cities, towns and hamlets of southeast Louisiana, from the crown jewel of New Orleans through the many hidden gems dotting the bayous and hugging the coast. The second half of the book is spent on our side of the basin where the Cajun and Creole cultures reign. We may be the choir, and McNulty is definitely preaching, but Louisiana Rambles is a great hymn to the Pelican State from the outside looking in. - Walter Pierce