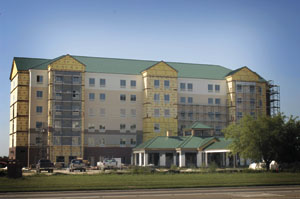 In the works for more than a decade, the hotel on UL Lafayette's property across from the Cajundome broke ground in September 2003 with no clear program for how construction of the privately-owned $15 million facility would be permitted, monitored and inspected. That critical issue ' a safety concern for future guests and visitors and a major liability for UL and Lafayette Consolidated Government ' appears to have slipped through the cracks. And now the project, which is running about seven months behind its anticipated opening, already has significant code problems related to its plumbing.

Its troubles may have just begun.

The quandary over who has authority over the hotel's construction was created by the structure of the project, a private venture on state-owned land, and a first in the university's history. UL President Ray Authement pressed relentlessly for a hotel at University Research Park for years, hoping to establish a facility that will double as a training program for UL's hospitality students and an added attraction for groups booking the nearby Cajundome Convention Center. After a series of setbacks, he convinced the University of Louisiana Board of Supervisors to endorse construction of the 150-room hotel. The only party to submit a valid bid was S.L. Sethi of Canton, Miss., and his partner, Tommy Vervaeke of Mandeville. Sethi is the developer/owner and contractor, sharing the latter role with Hall Fontaine Construction of Youngsville.

When the 100,000-square-foot Hilton Garden Inn finally got under way, the plans were not submitted to local code officials. Eleanor Bouy, head of LCG's Department of Planning, Zoning & Codes, says the department does not permit and inspect any jobs located on UL's premises. "It would be highly unusual on university property," says Bouy, who told The Independent Weekly she was unaware the hotel is owned by a private investor.

Her office, however, may have jurisdiction over the project ' and liability exposure down the road. In 1993 state law was amended to take away permitting and inspection authority on "state-owned buildings" from Metro Code, the local code authority at the time. (Consolidation of local and parish governments several years later abolished that entity.) However, the amendment did not address any exclusions of local code authority over private buildings on state property. It only placed the duty of state-owned buildings solely in the hands of the state fire marshal, the secretary of the Department of Health and Hospitals, and the state's Office of Facility Planning and Control.

Bouy assumed the OFPC, which conducts a comprehensive review of all aspects of state projects, was on the job. However, OFPC Assistant Director Bill Morrison says his office has no jurisdiction over a privately owned building.

The construction project never received a permit. A permit for the $15 million six-story hotel would have cost the hotel's owner about $75,000, confirms Herb Guillory, LCG's building official. Guillory says he was contacted earlier this year about an inspection of the plumbing, but he informed the plumber that his department was not handling the project.

The lack of local and state code involvement has the project's architect and engineers policing themselves. While not uncommon in the construction industry, the practice is not condoned by most construction professionals, who welcome the oversight of third parties as a necessary level of liability assurance, in addition to being the most reliable method of ensuring the safety of a public building's occupants. Many architects and engineers have the same expertise as field inspectors, who undergo intensive training to provide additional scrutiny on codes for plumbing, electrical, heating, ventilation, air conditioning and fire-protection.

There has been very little of this type of third-party oversight of the Hilton Garden Inn. In fact, construction began on the project in November 2003, before the state fire marshal approved the plans, and the plans were never submitted to DHH, a requirement for buildings with kitchen facilities. (LCG fire prevention officer Travis Morgan represents the state fire marshal on projects in the city limits and says several site inspections have yielded no fire-related problems.)

DHH got involved in January at the request of the Louisiana State Plumbing Board, according to DHH spokesman Bob Johannessen. The plumbing board asked DHH for assistance after it averted a potentially disastrous problem at the site. Notified by a tipster ' project developer/owner Sethi claims it was a disgruntled plumber who was not awarded the job ' that an unlicensed plumber was on the job, plumbing board enforcement officer Joe Leger found what he calls "big problems" with the plumbing. "The guy that did it, he knew nothing," Leger says. "It was all messed up."

The plumbing infrastructure did not provide adequate venting from the first to fifth floor, which would have allowed sewer gas to escape into the hotel's rooms. "Sewer gas is a methane gas. It's dangerous, and it could explode," Leger says. The plumbing job was so botched ' even simple fittings in the sewer system were on backwards ' that all of the work had to be yanked out at quite a cost, Leger says.

Sethi blames the Louisiana State Licensing Board for Contractors, which he claims said the plumber did not have to be licensed. That agency's executive director, Chuck Marceaux, says while there is some dispute over licensing requirements between his group and the plumber's board, there is no question in this instance that the plumber should have been licensed by the state.

The plumbing is now being overhauled ' at a substantial cost to the project ' by a plumber with a valid state license. Leger was back on the site last week and says the work so far is up to code.

Not everyone is as concerned about the issue as Leger. Sethi downplays the extent of the problem, leaving more uncertainty about the quality of other aspects of the project. "There were no problems with the work done [by the first plumber]," says Sethi, who claims the plumbing matter has not caused any construction delays. He blames delays on soil issues and inclement weather.

UL's director of physical plant, architect Bill Crist, also says there were no problems with the first plumber's work, insisting that it's unfair to assess the job because it was not complete. "There were no glaring errors that were going to cause a big issue," he insists.

Crist is in charge of all facilities on campus, and his primary role in the hotel project was ensuring it complied with design regulations of the research park, including exterior finishes, setbacks and adequate parking. He learned between September and October 2004, during meetings with LUS over utility connections, that the project had not been submitted to LCG for permitting. "We assumed they were going through all the means any private project would go through," he says.

Bouy doesn't understand why her office was not contacted as soon as university officials realized the project had not been permitted. Because the hotel is on state land, any LCG involvement in the project, including permitting, would have required clearance from LCG's legal department, she says. At press time, LCG attorney Pat Ottinger was researching the issue.

Crist says the architect and engineers had "stepped up" their roles, so he didn't think local government's involvement was necessary. "We felt comfortable that this project was in good shape."

In addition to the plumbing, there could be additional issues facing the hotel. One contractor who asked not to be identified says the interior has been exposed to rain, which may present harmful mold problems; he also questions the steel structure's stability. Additionally, the contractor witnessed roof workers not wearing safety belts, a requirement of the federal Occupational Safety and Health Administration.

An OSHA spokeswoman says no complaints have been filed. Sethi takes offense to the allegations that the environment and building may not be safe. "Street talk is cheap," he says. (A worker who was injured in April when debris caught his clothing and he fell three stories is doing well, according to Sethi.)

Sethi says he's built 19 hotels in the past decade and has been in business since 1973, with no major problems. "Safety is No. 1 for everything."

Still, Crist says if there is another project with a private group, it will have independent oversight, much like the $20 million LITE technology center under way at University Research Park. A collaborative effort between government, the university and local industry, LITE has a full-time project manager, in addition to a contractual requirement that the architect, electrical and mechanical engineers do construction administration. The OFPC also approved LITE's plans.

Says Crist, "Before a future project like this [hotel] gets under way, it's going to be my job to ensure that there is a proper inspection procedure in place."