Wednesday, March 30, 2011
**
While a Senate committee came unraveled last week, the real action was in the corridors - as usual.
By Jeremy Alford** 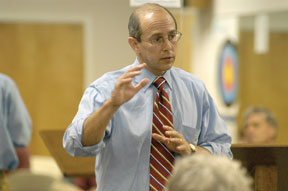 Before the special session started, a U.S. congressman would never be seen pleading for his political life with state lawmakers. Typically, it's the locals who plead with members of Congress for federal dollars.

Yet, there was Boustany, on day three of the Legislature's special redistricting session, inside a Senate committee room with fellow GOP U.S. Reps. Rodney Alexander of Quitman, Bill Cassidy of Baton Rouge, Jim Fleming of Shreveport and a staffer representing Steve Scalise of Metairie.

Even New Orleans Congressman Cedric Richmond, the only Democrat and sole black member of the delegation, made an appearance. He kept his distance on this day, openly opposing everything the Republicans supported during debate.

The committee meeting was heated. Chairman Bob Kostelka, R-Monroe, lost his control more than once. A former judge, Kostelka called state Sen. Karen Carter Peterson, D-New Orleans, "little lady" - as if to put her in her place. It prompted one veteran lawmaker to lament, "I don't know if the judge is going to last through this."

The meeting made one thing clear: Freshman U.S. Rep. Jeff Landry, a New Iberia Republican, is the odd man out. Landry cooked for a group of lawmakers the night before the session convened, but no amount of gumbo or sauce piquant could overcome his lack of seniority. "I think it's important that we have a say in this process, but we don't need to dictate to [state lawmakers] what we think is in our best interest," Landry said during a brief phone interview last week.

Landry likely will face Boustany in 2012, which makes the redistricting process a turf battle between the two Republicans.

Landry wasn't there on this day when Kostelka - without properly posting it on the committee's agenda - decided to take up his own congressional redistricting plan, which favors Boustany. Democrats raised hell, but the judge argued it was just coincidence. "Because the congressmen were present, I wanted to give them an opportunity to speak," Kostelka said. 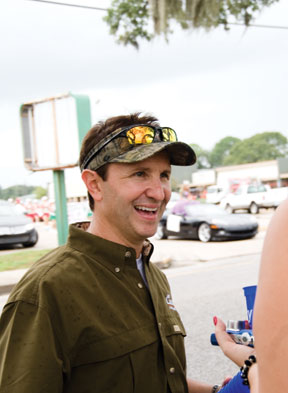 And that was just day three.

Things got wackier on day five. In the hallway outside Kostelka's committee room, Boustany and Richmond huddled with a staffer. "I wouldn't mind going down river into St. James because I'm going to become a big port person," Richmond told the staffer.

A few days earlier, Richmond was keeping his distance, but now he was keeping tight spaces with Boustany. At one point, Richmond passed a remark about former U.S. House Speaker Nancy Pelosi. Boustany shook his head and interjected, "Right. You told me about that at the Chinese restaurant."

In mid-January, delegation members met privately at a Chinese restaurant in D.C. and agreed to a set of "guiding principles" for redistricting. The principles included two north Louisiana congressional districts that would protect Alexander and Fleming. Maps showing as much were distributed at the meeting by Kostelka.

Back in the hallway on day five, Richmond and Boustany had the attention of Kostelka. They spoke in hushed tones. It was another tense day, and Kostelka's congressional plan was on the agenda this time. "OK. Fine," Kostelka said to the pair. "We'll just make the changes later."

Word traveled quickly that Kostelka's congressional plan was in danger because of his heavy-handedness earlier in the week. Another similar plan was substituted as the ruling class' choice.

Meanwhile, on the House side, negotiations began to advance a measure that would keep Terrebonne and Lafourche together. By April 13, there will be a move to mesh the two plans in a compromise, but who can say what the final plan will look like?

Alexander, the dean of the congressional delegation and the man who led the pivotal meeting in D.C. in mid-January, winked and nodded at folks passing in the hallway. He seemed pleased with the way things were going.

That had to make some folks, particularly Landry, nervous.