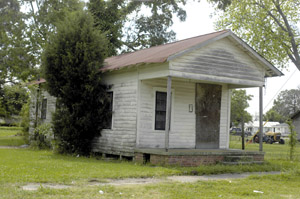 In the McComb Veazey neighborhood, hundreds of vacant lots ' many overgrown with weeds and brush ' dot the narrow streets among the rows of 1940s cottages. Many of the front porches are slanted or collapsing, and a few look abandoned. In stark contrast to other areas of Lafayette, most businesses in McComb are struggling. Some are shuttered with no sign of coming back.

The neighborhood, one of the oldest in Lafayette, bears little resemblance to the bustling social center it was back in the 1960s and '70s. But if a new nonprofit being spearheaded by Lafayette Consolidated Government is successful, the vacant lots in McComb may slowly start filling up, renewing interest in the stagnant community.

Last week, the Lafayette Public Trust Finance Authority committed $400,000 to a new Lafayette nonprofit dedicated to bringing vacant, abandoned and tax delinquent properties back into use.

The organization, which is yet to be named, plans to have a three-person staff, headed by an attorney that specializes in mortgage or property title issues and a three to five member of board of directors. City organizers are also in talks now with the Community Foundation of Acadiana to act as a parent organization.

LCG hired attorney Gary McGoffin last December to research the idea primarily as a way to help relocate the 107 residents who are set to be displaced by the eventual construction of the I-49 connector ' an elevated highway that will run the north-south interstate through the city, along the south end of McComb Veazey.

Because of its approximation to the I-49 connector and its abundance of vacant property, the nonprofit will strictly focus its efforts in the McComb neighborhood in the first year. "We want to be very focused," McGoffin says. "So that in the first year we can have a success story and see that it works and how it works."

Eventually, the nonprofit will operate throughout the city.

Known nationally as land banks (Louisiana law prohibits non-financial institutions from using the term bank), the concept for the organization is not new. Land banks began cropping up across the country as early as the 1960s to deal with the problem of inner city property that has fallen out of use, with little prospect of redevelopment. The nonprofits also are used by cities to assist in acquiring and holding land for future roadways and other developments.

In Louisiana, the New Orleans Redevelopment Authority is the only current example of a land bank. NORA was formed in 1968 to help redevelop blighted properties in the city. In addition to purchasing and acquiring donated land, NORA also has expropriation powers ' an issue Lafayette officials are shying away from with their venture.

"We have no intention that this land bank will ever expropriate property," McGoffin says, adding that Lafayette's conservative population wouldn't stand for it and that New Orleans has much more serious redevelopment issues on its hands. In Lafayette, McGoffin says there is ample opportunity for redevelopment without expropriation.

According to city records, the McComb Veazey neighborhood alone has 64 tax delinquent ' also know as adjudicated ' properties. Of these, 54 have been held in tax limbo for at least five years, making it highly unlikely they will ever be reclaimed. McComb also contains a total of 419 vacant lots, many created by houses and businesses that were torn down over the years.

In a presentation before the LPTFA last week, McGoffin used the analogy of a black hole to describe the state of the city's adjudicated properties.

"Black holes are a force of nature that suck energy in without allowing any back out," he says. "We have a similar phenomenon here in Lafayette with adjudicated properties."

Adjudicated properties are those the government has taken over because property taxes have not been paid. To reclaim the property, an owner or buyer must pay off the tax debt. McGoffin notes that often times, adjudicated properties become dilapidated and acquire so much debt that it is not worth it for anyone to come in and purchase them. The result is a piece of property that sits idle and continues to deteriorate, sometimes becoming a haven for homeless wanderers or drug traffickers. In the case of vacant lots, the city often pays a hefty price in an effort to maintain them.

In the McComb neighborhood alone, McGoffin estimates the city is paying approximately $75,000 a year just to keep the grass cut on vacant lots.

Land banks acquire property by either purchasing them outright or receiving donations. In the case of adjudicated properties, state law allows for the city to donate them to a nonprofit with an approved development plan. In the process, the nonprofit can get all debt on the property's title absolved.

In redistributing property, land banks have the option of either trying to sell to prospective to home owners or commercial developers, or donate to another nonprofit, such as Habitat for Humanity.

McGoffin notes this type of urban redevelopment could go a long way in helping Lafayette manage its compounding growth issues.

"This is the first step in implementing smart growth," he adds. "If we can do this, we start working on our sprawl program."

For McComb residents, the issue is more about preservation.

Centered around 12th Street just north of the Evangeline Thruway, McComb Veazey is one of Lafayette's oldest neighborhoods. The origins of Lafayette's Black Mardi Gras celebration trace back to the empty lot at the corner of 12th and Apple streets. Clifton Chenier owned two houses in McComb, both bought during the days when he was a regular at the now defunct Blue Angel club on South Orange Street.

Lynne Guy, president of the McComb Veazey Neighborhood Improvement Corporation, says younger generations have lost touch with McComb's rich traditions. She hopes an injection of new homes and businesses in the area will also help bring a stronger sense of community back to the area.

"If people start to see homes and new businesses coming up, it'll bring people back," she says. "It'll boost our economy, it'll put more tax dollars in our area, but most importantly, it'll boost our pride."