One of the more painful results of Bobby "The Butcherizer" Jindal's state budget cuts is the slashing and dismantling of certain elements of higher education. Go figure. In the case of UL Lafayette, that includes the phasing out - over the next few years - of the Department of Renewable Resources and its two curricula of sustainable agriculture and environmental and sustainable resources. This realignment could have an adverse effect on the employment of one of our campus' favorite and most colorful characters, Griff Blakewood. 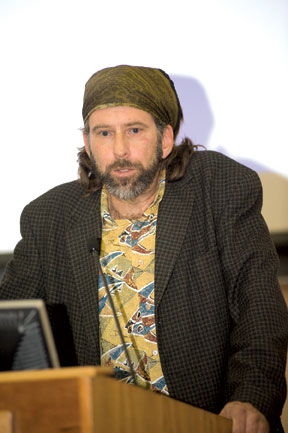 One of the more painful results of Bobby "The Butcherizer" Jindal's state budget cuts is the slashing and dismantling of certain elements of higher education. Go figure. In the case of UL Lafayette, that includes the phasing out - over the next few years - of the Department of Renewable Resources and its two curricula of sustainable agriculture and environmental and sustainable resources. This realignment could have an adverse effect on the employment of one of our campus' favorite and most colorful characters, Griff Blakewood.

History of Griff in five words, more or less?
Louisiana native crossed the Basin 20 years ago and got born again.

Typical day in the life of Griff?
An infinitely variable wave which follows the general pattern of: awaken-remember-doubleshotmusictime-birdseed-pedalthinkride-realityteach-writesomething-pedalreflectride-family-read-dream-repeat

I recently got wind that, as a result of Bobby Jindal's budget cuts, your Renewable Resources department is being shut down or possibly combined with another department. WTH?
Yes, the Department of Renewable Resources and its two curricula are being phased out over the next few years, and although environmental science will still exist at UL, it will become a more basic science curriculum, possibly in a new geosciences program, which will not, as far as I understand, be based on sustainability.

Bummer. The students under you have flourished. They saved the horse farm and in turn are responsible for Lafayette's next big green-space and city park. Thoughts?
No matter what happens in the current reshuffling, my career at UL thus far has been the most meaningful and important period in my life, and I will always be thankful for the opportunity that this university has given me. I believe that I truly found my "calling" in teaching my passion and seeing my students respond by not just believing they could make a better world, but actually accomplishing it. I have been, and hopefully will continue to be, part of a learning community of truly beautiful human beings who care for each other and the amazing space we share.

What were the biggest benefits of having a Renewable Resources department at UL? What will the community and UL lack when it is shut down?
Thomas Jefferson believed that the role of higher education was to enable Americans to "read and understand what is going on in the world in order to keep their part going on right." What is presently "going on in the world," from climate and biodiversity changes, to population and immigration issues, to oil spills and nuclear meltdowns, to deficit spending and economic instability, is a crisis of non-sustainability which has its roots, I believe, in a failure to provide the sort of education Jefferson believed was essential for a self-governing people. Renewable Resources was about sustainability, understanding earth as our only home and thinking about the most reasonable and realistic path to ensuring the possibility of a flourishing future for humans and the other earthlings. But the end of Renewable Resources does not necessarily mean the end of sustainability at UL. There are faculty members in many departments at UL whom I consider to be sustainability scholars; right off the top of my head I can name colleagues in the departments of anthropology, architecture, art, biology, engineering, geology, humanities, history, physics, political science and sociology who consider sustainability to be a high priority. There is no reason we cannot create an interdisciplinary sustainability studies program at this university that will actually increase the number of graduates prepared to deal with our global challenges.

Griff, you know some people reading this will assume that your department is full of neo-hippies, trying to save the earth when they're not dancing around at drum circles. Name some things that nobody knows about the department.
I suspect that we have a few more neo-hippies than most other curricula, but I should point out that some of them are among our most successful graduates, now making their mark in graduate programs and environmental careers. But we also have great success stories among students who consider themselves religious conservatives, who have transcended the "dominion" approach to resource management, embracing instead the idea of stewardship: caring for the gift that God has given them.

Amen. What's the future hold?
I am impressed that cinematic artists are the prophets of the current generation. Should the human species remain committed to its vision of technotopia and infinite economic growth at the expense of nature, some future generation will find itself in the world of The Matrix, or (if they are a little luckier), Wall.e. If we are a little wiser, the Avatar outcome is still possible (I have yet to meet one person who was cheering for the machines!), and we will learn to embrace human existence as but one species in a living system comprised of millions, all of us co-evolving on this miracle planet with five billion years' worth of sunshine left to power our living, learning, dancing and loving.