At Lafayette High, one of three parish high schools implementing an eight-course rotating class schedule this year, students and teachers are begrudgingly adapting. Is block scheduling worth it? 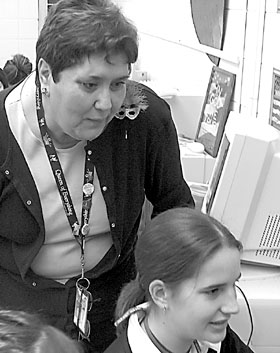 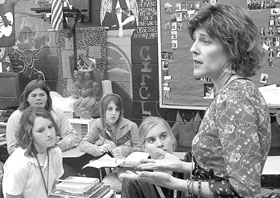 "Usually, we have a really strong start," says Neck, who's taught for six years at the school. "[This year] we all felt some real unsettlement. It was a pretty squirrelly beginning of school."

Lafayette High ended last year on a high note, finishing among the state's 10 most improved schools for scores on the Graduate Education Exam taken by sophomores and juniors each spring. But midway through this school year, many teachers and students feel they are falling behind under the newly instituted block schedule, which slots eight 90-minute classes over a two-week rotation. Students, who get more schedule flexibility from the two additional courses per year, alternate daily between block A and B classes.

"At this point, we're kind of settling in the saddle," says Principal Patrick Leonard. "The big thing is teachers having to change their strategy or their teaching styles. The most important thing is that you're concentrating on the necessary material and the mandated material from the state department." Leonard hopes the program inspires teachers to re-evaluate their lesson plans. "There's some things [teachers] do that are kind of like adding a salad to a dinner plate. It can make it look real nice, but it doesn't have much substance to it."

While a handful of Lafayette High teachers have embraced the added prep time and expanded 90-minute class periods, many complain of the overall face time they are losing with their students under block scheduling. They say it not only squashes any leisurely, Socratic teaching, but also cuts into the meat and potatoes of their class. In order to accommodate an eight-course schedule, compared with the six-course schedule of prior years, each class must be scaled back overall by about 35 hours.

"That's over a month that you don't have," says English teacher Diane Touchet. "It's a killer." Touchet says she now has to cut six Greek plays, as well as Shakespeare's Julius Caesar and Dante's epic poem The Inferno, out of the curriculum for her sophomore gifted and talented class.

Several Lafayette High English and math teachers say they are behind on lesson plans and worried they may be rushing students through material in order to cram it all in for upcoming standardized tests. Many students, bemoaning the increased homework and daily tests, aren't big fans of block scheduling either.

"I cannot stand block," says Mark Overbey, a freshman who struggles with the organization that goes with a rotating schedule. "I would rather the classes each be 45 minutes and have them all every day," he says.

Rachel DeCuir, a straight-A student and the senior president of the Honor Society, calls block scheduling "a procrastinator's nightmare." DeCuir dreads leaving school this semester to interview for several scholarships, saying that missing one day of school under block scheduling is like missing two days of traditionally scheduled classes.

Even students who prefer the new schedule, like freshman Danielle Weise, admit its challenges. "I like having more classes to take," Weiss says. "But I don't like it because I forget homework, and teachers think we have more time to do homework so they give us more."

Supporters of block scheduling insist most of the criticisms are part of the growing pains that any school goes through in its first year under a new system. One such advocate is Barbara Cordes, the now-retired Comeaux High School principal who helped launch the alternative schedule in Lafayette Parish two years ago. (Comeaux, along with Northside High School, is now in its third year under block scheduling.) Cordes says neither the teachers nor the students want to go back to the traditional school week. She argues the rotating classes help prepare students for college.

Block scheduling also fits into the school board's career academies program, which required adding an extra class period during or after regular school hours. Through the career academies ' in which schools partner with the private sector to offer vocational training in local industries ranging from health care to jewelry making ' any student is allowed to enroll in the parish high school of his or her choice. This also expanded the school board's school-of-choice option initiated by the Lafayette Parish School System's longstanding desegregation case.

"We had to get the academies going," says school board member Mike Hefner. "I really would have liked some more time to explore some more options of getting that seventh period without going to block scheduling. We're trying to provide equal education opportunities for all students. One of the best ways to do that is to let them choose the school they think will serve them the best. Schools of choice have gotten overwhelming support from the public."

In addition to academy courses, block scheduling frees up students to take more physical education and arts academy electives. But at Lafayette High, a vast majority of core curriculum teachers wonder if these benefits are coming at the expense of critical reading and math tutelage. Neck says the number of As in her civics/free enterprise class is down by about 10 percent. Furthermore, she is having to roll components of her semester-long civics class into the free enterprise class in order to meet all of the state's benchmark requirements.

"Am I meeting these benchmarks with the block scheduling?" she asks. "The bottom line for me right now if you had to ask me that question is, I don't think so."

Jennifer Anderson, a veteran Lafayette High English teacher of nearly 20 years, says her students' grades are also down. Though she says the block schedule is easier on her, she worries about the impact it will have on her 14-year-old son when he starts high school next fall.

"I think my biggest beef is that no one has given me any empirical evidence on block," she says. "I want to see someone who's been with it for 10 years to show me some empirical evidence that test scores go up. I think it's bull."

Few academic studies on block scheduling are encouraging. A study by the Texas Education Agency of the same scheduling used by Lafayette shows that while class grades slightly improved under the system, SAT, ACT and AP exam scores all dropped significantly.

Debbie Hargrave, chair of the Lafayette High English department, points to the fact that some of the schools who pioneered the use of block scheduling have since come out against it.

"This is what we do in Louisiana," Hargrave says. "We take national trends and adopt them after the people that started them have abandoned them. We did the same thing with teacher evaluations."

Hargave's colleague Melinda Mangham concurs, adding that even other schools she has taught at in Louisiana, such as Episcopal High in Baton Rouge, have since abandoned their hopes for block scheduling.

"I've done block scheduling before," Mangham says. "I've been to this rodeo. And everywhere I've been that they've had it quit doing it."

Mangham was one of the most outspoken opponents of block scheduling when it was first being discussed by the school board. One of her biggest fears, she says, is the revelation that most students will now obtain their required 23 credit hours for graduation by the end of their junior year.

"I think that's going to be a shock to parents when they realize they have a kid who's 16 years old and technically ready to go to college and they're not really ready," she says.

Despite their fears, most Lafayette High teachers are resigned to the notion that block scheduling is here to stay ' though they may not accept it quietly.

"There's a pretty vocal group of teachers over [at Lafayette High]," Hefner says.

"And they make some valid points. It's easy to criticize, but what I want to hear is what are the alternatives?"

Some of the Lafayette High dissenters have now formed a committee that hopes to work with the school's administration on ways they can tweak the system ' and some hold out hope that they may be able to shift over to a "modified block" that allows for core curriculum classes every day. However, because of the myriad programs at Lafayette High (including classes for gifted and foreign students), any change in scheduling is especially difficult.

Principal Leonard isn't rushing to judge block scheduling. He says in addition to the new class rotation, his staff also is adjusting to the launch of the new health care academy and a new freshman mentoring program. Lafayette High also picked up close to 300 new students this year ' about 70 of which came from outside of the district through the academy program ' and is now the largest high school in the state with 2,167 students. Leonard, a football coach turned administrator now in his second year as principal of Lafayette High, sees plenty of time to adjust.

"One of the things I've learned is you don't judge your team by the first quarter or the first half," he says. "So we still have half of the game to go through."