Two Chamber of Commerce officials resign in Arnaudville as tension keeps rising over an artists community. 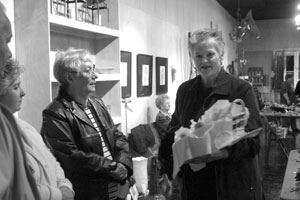 Sculptor William Lewis has tried to buy the former waterworks building in Arnaudville from the town for more than a year. It's been one of the central issues dividing the burgeoning artists community and city officials, and it should have been cause for celebration when City Attorney Jim Gates announced that the sale had been approved and a closing date set for June 8. But the words Lewis has been waiting to hear were bittersweet and came at a price.

Exhausted from the politics surrounding the sale and months of what she's calling "pressure" from Mayor Kathy Richard and Chamber of Commerce President Carol Knott, Chamber CEO Betty Arnaud Roy, a huge supporter of the artists community and the sale of the building to Lewis, quit the chamber April 12. Five days later, Knott also resigned, saying the chamber had become too political.

Artists community founder George Marks and participating artists were devastated to hear of Roy's resignation. At the town meeting, Marks was listed fourth to last on the 22-item agenda and slated to speak about the chamber of commerce. Before he stood, Mayor Kathy Richard sarcastically asked, "Are you representing the Chamber of Commerce?" Marks replied, "I'm speaking tonight not as an artist but as a concerned citizen and an investor in the town of Arnaudville." He then proceeded to list all the artists and business owners he's recruited to Arnaudville with the help of Roy and the chamber of commerce. He ended close to tears with the words: "Unless this is resolved, all of our hard work and progress will be in jeopardy. Mayor and council, what will you do to remedy this situation?"

After reading The Independent Weekly's recent cover story ("Arnaudville Renaissance," April 5), Knott says he called Roy and left her a voicemail asking her to meet with him to discuss it. He went to the chamber office April 10 and says he and Roy talked about Mayor Pro Temp Chad Hebert's "slaughtering" of Richard in The Independent. "She stated later [in the Teche News] that I'd intimidated her [with] the phone call," Knott says. Roy says Knott regularly became upset and called her and came by her office every time a story was written about the artists community. The day before she resigned, Roy also received a call from a supporter of Richard who told her to stay away from the artists community.

"A few minutes later, the chamber office door opens and it's the chief of police [Richard Mizzi]," says Roy. "He said, 'Miss Betty, I just had to come and tell you I overheard what's going on in the town hall, and it's going to be bad for you tonight.' I just started packing my car. I said, 'This is not worth it.' I made $800 a month. I work 12-14 hours a day. To be constantly under pressure, I don't need it. This is beginning to be a bad rep for the chamber. [Mayor Richard] wouldn't give up 'til she had me out of there."

Sixty-one-year old Knott, meanwhile, went for his regular physical checkup the week after Roy's resignation, and the doctor recommended he begin immediately taking medicine for high blood pressure. "I don't really think I need that," Knott told the doctor. "I said, I think I know what my problem is." Knott resigned that evening at a special meeting of the chamber and its board. Chamber President-elect Mike Lofton will step in as chamber leader, and the board will begin a search for a replacement for Roy.

Both Roy and Knott say they plan to lay low for a while. "That's the end of my career," says Roy. "That makes me sad. It wasn't for the money; it was doing something that I felt was very honorable to do for the community."

As for Marks' question at the town meeting ' what the mayor and council plan to do to remedy the situation ' he received no response. "I think we all know the reason Miss Betty resigned is because of the influence of some of the individuals at that desk," he angrily said at the meeting. "I've invested a lot of money in Arnaudville, a lot of money."

Richard retorted: "George, you and I tried to talk at the last meeting. It's just accusations against the mayor. I still want to try. This is not the first time Betty quit the chamber. [Roy says she resigned the first time in 2004 to care for her dying mother.] We're supposed to get together and move forward with this town. We have all done great things with this town, but it's become this gossipy place. I am sick of it.

"I will be the first one to admit I'm not perfect," she continued. "I have been attacked so much. I had my different opinion. I couldn't say yes [to the sale] right away. I had to listen. I couldn't stop you from growing. How could I stop you? The minute I didn't agree with you or Debbie [Lagrange] â?¦ I'm the one that's getting smashed about it. This article [in The Independent Weekly] was ridiculous."

Asked during the meeting why she did not return repeated calls for The Independent's April 5 story, Richard said, "You can write all you want. I'm not going to step down to that level. It's a vendetta. It's an election year."

An April 19 article in the St. Martin Parish Teche News also has the town in an uproar. Titled "Fire, Water and Change: Artists' community develops in Arnaudville," it references Richard's longtime feud with resident Debbie LaGrange and cites Knott as partnering with Richard in her opposition to the artists community. Knott says the only problem he had with the artists were some nude sculptures in the front window of William Lewis' home and studio. He admits he and Roy disagreed over the art. "I told her I don't think that's the image that we want to portray in Arnaudville."

Despite his opinion, Knott voted for a resolution to sell the waterworks building to artist Lewis and even presented the resolution at a council meeting. "I felt this would be a great thing for the town," he says.

But as the situation escalated, Knott felt he was getting too close to the issue. His brother-in-law Ricky LaGrange sits on the council, and two of his sisters-in-law work for the town hall. He's been friends with Mayor Richard for 40 years. "I kinda saw myself in a pickle," he says. "I think it's a political atmosphere within the council, and it had gotten political in the chamber. I'd like to know how many times when Betty and I were talking, I said, 'Betty, the chamber cannot be a political entity. We have got to keep the new people coming in happy, we've got to keep the old businesses happy, and we got to work with the town.'"

Richard echoes those sentiments. "We're all adults, and we're all working for the same goal," she says, before taking a jab at her opponents. "I feel that Arnaudville has a very strong Chamber. It's made up of board members who are not quitters."

Arnaudville still has five months until its next mayor and council elections in September. With tempers flaring and chaos reigning at town meetings, Knott is afraid of what's to come. Richard quickly lost control of the April town meeting, which lasted more than two hours and ended with Police Chief Mizzi and a former deputy yelling at each other from across the room.

"The statement was made, not to me, but it got back to me, that what was happening here was nothing compared to what it was gonna be, and I'm thinking, whoa," says Knott. "It's been one of those fiascos, but I don't have anything against the artists community. I think if we can get past the next month â?¦ the election is still gonna be ugly as hell. There'll be a lot of name calling."