Cash payments from everyone's favorite energy giant are being woven into the political infrastructure that supports Gov. Bobby Jindal.  By Jeremy Alford

With more than $9 million in his campaign war chest, Gov. Bobby Jindal can afford to be choosy about where he draws down campaign cash, but why bother? Sure, $9 million is a lot of dough, but as Edwin Edwards used to say, why leave any around for an opponent to use against him? 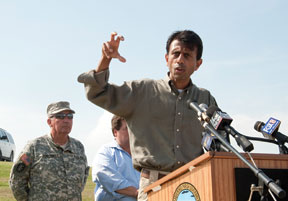 Gov. Bobby Jindal, in the wake of the BP spill

Which is why, no doubt, Jindal agreed to a fundraiser hosted last week by Mike Worley of Hammond. Worley is the CEO of Worley Catastrophe Response, the company selected by BP to process claims related to last year's oil spill.

Worley Catastrophe Response's contract with BP makes the company an official adversary of the state of Louisiana, legally speaking. Jindal, in his capacity as governor and ostensibly on behalf of aggrieved Louisiana residents, asked a federal judge two months ago to take over the claims process Worley oversees.

So why is Jindal allowing Worley to raise campaign cash for him now, at a $1,000-per-plate event?

Jindal apologists claim the governor avoids a conflict on this issue because Worley merely works for BP, which is the real adverse party. That defense is half-baked at best. According to a search of state contracts, Worley Catastrophe also has a $380,000 consulting agreement with the Division of Administration, which makes it a state contractor. Moreover, the company's contract was awarded on Jindal's watch in August 2009 - and it was bankrolled with federal dough.
Jindal may say he's taking nothing for granted with regard to his re-election prospects, but when it comes to raising campaign money he's taking all he can handle - even from those adverse to the state.

Quite expectedly, and rightly so, the Louisiana Democratic Party went nuts on this one. "It is a clear conflict for Gov. Jindal to take campaign cash from somebody who works for BP at the same time he's supposed to be holding BP accountable," said party chair Buddy Leach. Leach added that Jindal should have canceled the fundraiser.

Turns out, however, that Worley's political largesse knows no party bounds. He gave $5,000 to the Democratic State Central Committee last fall - after BP hired his firm. In fact, Worley has donated money to a wide range of Democrats, from state Sen. Karen Carter Peterson of New Orleans to President Barack Obama.

For the time being, at least, Worley is Jindal's millstone.

"The governor wants the support of all people in Louisiana," Kyle Plotkin, the governor's press secretary, told The Associated Press. Really? Does the governor want money from death row inmates or from Planned Parenthood or from gun-control advocates?

No, especially when there's so much low-hanging fruit from state contractors and others who have to interface with state government.

For example, Team Jindal has trousered $12,000 over the past two years from firms involved with the construction of the governor's much ballyhooed but quickly forgotten coastal berms. Some of that moolah was delivered just months after the massive project got under way in 2010. The companies and their loot include Shaw Group, $6,000; B.F.M., $3,000; C.F. Bean, $2,000; and G.C.R. & Associates, $1,000.

Oh, yeah, BP also put up $360 million for the berm project, which was intended to stop the flow of oil from BP's Deepwater Horizon well. The experiment ultimately was deemed "not successful" by the national oil spill commission. Is it noteworthy that the Baton Rouge-based Shaw Group was charged with hiring subcontractors? Sure, but it's equally noteworthy that all of the berm firms that donated money to Jindal - save C.F. Bean - have direct contracts with the state as well.

Oh, but Jindal's mouthpieces have declared that taking money from subcontractors somehow erases all conflicts - though they don't quite explain how. In other contexts, the feds have been known to take a dim view of that ruse. Just ask our recently paroled former governor.

Still, one cannot help spotting a trend when cross-referencing a list of the state's oil spill contractors with Jindal's campaign finance reports.

For example, the plaintiff law firm of Kanner & Whiteley currently has a $1.8 million legal contract with the state related to the BP disaster. In March of last year, shortly before the Deepwater Horizon rig exploded, Allan Kanner of New Orleans, the firm's managing member, donated $2,000 to Jindal's campaign. Then, roughly three months after its contract went into effect with the state last year, Kanner coughed up another $3,000 to the governor's campaign.

Two things are noteworthy about Kanner's contribution: first, he's a high-profile plaintiff lawyer and, as such, he's not a natural political ally of a conservative Republican like Jindal; and second, Kanner got the contract on the recommendation of Attorney General Buddy Caldwell - but all such contracts typically have to be approved by the Division of Administration's Office of Contractual Review, which is a function of the executive branch.

At a minimum, accepting contributions from trial lawyers shows that the governor really doesn't care where he gets his campaign money.

In March of last year, Jindal's campaign received $5,000 from personal injury and product liability firm Baron & Budd. About five months later, FORBES reported that Jindal was hoping to hire the firm to pursue BP litigation. A search of state contracts, though, shows no current activity for Barron & Budd - aside from its hefty donation to the governor, on file with the Louisiana Board of Ethics.

Then there's the peripheral action. Steve Theriot, Jindal's first inspector general, who vacated the office in 2009, now has a $100,000 consulting contract with the state related to the oil spill.

More recently, Angèle Davis, Jindal's former commissioner of administration, has been jockeying for a piece of the $15 million that BP ponied up for rebranding and marketing Louisiana and its products in the wake of the disaster. Davis is working with an international firm that is expected to bid on a project related to the fund for the Louisiana Seafood Promotion and Marketing Board.

Elsewhere, plaintiff lawyer Walter Leger Jr., the father and law partner of state Rep. Walt Leger III of New Orleans, has been retained by St. Tammany, St. Bernard and Lafourche parishes to handle potential oil spill litigation. The senior Leger was named by then-Gov. Kathleen Blanco to the now-defunct Louisiana Recovery Authority after Hurricane Katrina - before his son ran for the state House - and was re-appointed by Jindal. He served as LRA's vice chairman under Jindal. Leger's law firm, Leger & Shaw, donated $5,000 to Jindal's campaign last fall. It appears to coincide with a splashy Jindal fundraiser on St. Charles Avenue hosted by big-time trial lawyers in September 2010 - and it offers further evidence that Jindal doesn't much care where he gets his campaign cash.

For all the economic hardships inflicted upon coastal Louisiana - which Jindal has expounded on for national audiences - the governor's political financiers don't seem too hard pressed for work these days, particularly when their paychecks come from the public treasury.

One recent statewide survey suggests that Jindal's cozy relationships with contractors are finally beginning to eclipse his talking points about "ethics reform" in the minds of voters. This year's Louisiana Survey, released last month by LSU's Public Policy Research Lab, noted: "In 2008 during the first special session of the state Legislature [called by Jindal], a comprehensive package of ethics reforms was passed and signed into law. The immediate effect on public attitudes about corruption was striking - a six-point decrease in the percent of respondents saying the state had become more corrupt. Since the passage of ethics reform, however, there has been little or no subsequent movement in public attitudes toward corruption."

In fact, the survey shows that 20 percent of Louisiana residents believe the state is more corrupt now - and 40 percent contend the state is just as corrupt as ever. "Overall, perceptions of corruption appear to have stabilized," the LSU survey concludes.

Maybe that's why Jindal is none too picky about where he gets his money. As long as he continues to say one thing while doing the opposite - while piously denying any conflicts - he truly cannot take anything for granted.
Particularly voters' tolerance for hypocrisy.