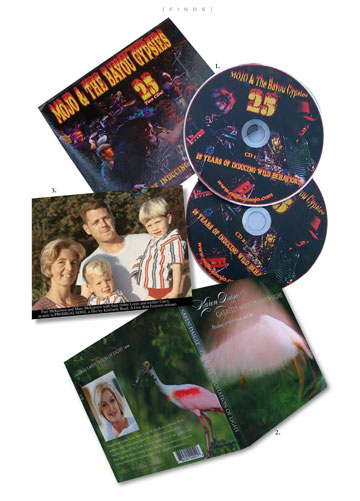 MOJO RISING
MOJO & The Bayou Gypsies blend Cajun and zydeco music into a big, mushy, feel-good gumbo of up-tempo, all-English-language party music that traffics in Mardi Gras beads, cowboy hats and "laissez les bons temps rouler." Ah-yee! They've just released a 25-song double-CD imaginatively titled 25 ($19.95 through CD Baby). The traditional Cajun and zydeco instruments are there - accordion, fiddle and rubboard (the latter played by Zydeco T Carrier, sister to late band leader Roy Carrier and aunt to 2011 Grammy winner Chubby Carrier) - and the musicians are first-rate players. It's local music obviously designed for far-away crowds for whom Cajun and zydeco are interchangeable, and it's an amalgam that will surely annoy the purists. But if you just want some background music for a crawfish boil, this energetic set is a gamely if generic sound track.
- Walter Pierce

COMFORT, PEACE AND LOVE
Years ago, as a single mom who wanted to find something to inspire and comfort her during difficult times - an insightful meditation outlet - Karen Daigle kept coming up empty, no matter how hard she looked. "Someone made the comment to me, If you can't find what you want it means you were meant to create it yourself,'" she recalls. About three years ago, Daigle finally took the statement to heart, knowing she had the background in radio and television to produce something others like her could use for relaxation, comfort and joy. For several years she worked on and off on the project, and in October decided to pull a team of local talent together to bring a high-quality meditation CD to the market. She collaborated with Vidox, graphic designer Megan Barra and local wildlife photographer Darlene Boucher, and the result of that effort is the soothing CD Gabriel's Meditation of Light: Finding comfort, peace and love. The CD is available at River Ranch Fitness Center, RiverSpa, Wise Body/Camellia House and Skin Smart on North University for $12.95.
- Leslie Turk
**
TRANSGENDER JOURNEY**
South Arts Southern Circuit Tour of Independent Filmmakers has graced Acadiana Center for the Art's James D. Moncus Theatre as one of its 44 venues. The next screening, set for Saturday, April 9, is the autobiographical Prodigal Sons. It follows Paul McKerrow, the heartthrob star high-school quarterback who, after a 10-year hiatus, returns to his hometown of Helena, Mont., as Kimberly Reed following a long process of accepting his/her transgender identity and having the medical procedures to make that identity a reality. Reed, the filmmaker, was an editor before she picked up a camera and decided to document her journey home. Now she is an acclaimed director and producer and also the first "out" transgendered filmmaker courted by the Southern Circuit Tour. Tickets to Prodigal Sons range from $5 to $7 and include a Q&A with Reed after the film. Buy tickets at the box office in person, call the box office at 233-7060 to reserve your ticket, or go to AcadianaCenterfortheArts.
- Anna Purdy