Top of the Hops seeks to educate the public on the nuances of beer. By Wynce Nolley

The 2nd Annual Top of the Hops Beer Festival is coming back to the Cajundome Saturday, April 9. The event is presented by Abita Beer and features more than 150 beers from breweries as close as Broussard and as far away as Belgium.

Top of the Hops seeks to educate the public on the nuances of beer. By Wynce Nolley

"Beer is a best friend of mine. When I'm lonely I can have one anytime. You may find it sad, yeah, but I know it's true, that I'd rather have a beer as a best friend than you."
- Renella Rose Champagne 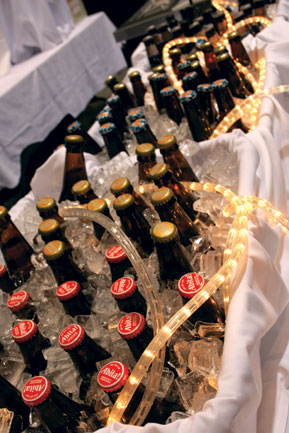 The 2nd Annual Top of the Hops Beer Festival is coming back to the Cajundome Saturday, April 9. The event is presented by Abita Beer and features more than 150 beers from breweries as close as Broussard and as far away as Belgium.

"Really it's about the beer. Our hopes are that people come there and they haven't heard of half the beers," says Jay Wilson of Red Mountain Entertainment, which is organizing the event with the help of Louisiana-based Blue Deuce Entertainment. "So we're not looking to pick the simple beers. We're looking to get radical with some of these distributors."

Some of these not-so-simple beers Wilson mentioned that enjoyed huge success with crowds when the festival visited Mandeville before arriving in Lafayette include the Wells Banana Bread Beer that yields a modest 5.20 percent alcohol by volume; the Samuel Adams Chocolate Bock that sports a handsome 5.80 percent ABV and Meantime's Coffee Porter offering an attractive 6 percent ABV.

"We're not just repeating the beer list from last year," explains Wilson. "We're really spending time changing it up. Shiner's got a new beer called Ruby Red Bird. I've never heard of that before, but probably half of Lafayette's never heard of that before either. Our goal with the distributors is to tell them, Look, bring some cool stuff that people will get blown away by.'"

This year's festival will also feature Chef Kevin Hawkins of Rouse's Supermarket demonstrating how to prepare a dish named "Rouses Green Onion Sausage Simmered in Sam Adams Beer," which will use only locally grown produce and locally caught fresh seafood. Hawkins, who provides cooking classes and demos at the Rouses' Supermarket in Youngsville, was a smash hit with past festival-goers, according to Wilson.

"We just had him do something in Mandeville a few weeks ago that was incredible," Wilson says. "He's very entertaining."

There will also be live music to soothe the slightly sober with the Blacklight Bros kicking off the festival from 2 to 3:45 p.m. followed by Badcats from 4:15 to 6 p.m.

"We're not trying to reinvent the wheel with this kind of event," says Wilson. "This is more of an annual thing where people can look forward to spending four hours with their friends, hang out, try some beers, listen to some music and go to the education sessions."

General admission to the four-hour festival will run $35, which gives you a souvenir in the form of a two-ounce sampling mug, a very comprehensive festival guide, access to the Samuel Adams Brew University Tent that holds seminars on everything beer, free parking and of coarse access to the vast craft beers offered.

However, if you're looking to get more out the Top of the Hops Festival, a VIP package is available for $60 that gets you into the festival a full hour before everyone else and access to the Party Central VIP Lounge, which features exclusive beer tasting selections and complimentary food.
There will also be Designated Driver tickets for $15 and of course VIP Designated Driver tickets for $25 with the obvious difference being the omission of beer sampling.

"Our goal is to educate," notes Wilson. "It's not a drunk fest. It's not a keg party. I think that's a real important thing to emphasize is that it's really an opportunity to learn about new beers that they've never heard of and to debate with each other and to figure out if they like it or don't like it."