The son of Greg Allman has a band. It's called Honeytribe. They play Downtown Alive! on April 8.

Devan Allman, son of the legendary Greg Allman, describes his band Honeytribe as "science fiction blues." The image brings to mind bearded dudes, sporting Star Trek New Generation suits while playing 20 minute laser beam solos on Steinbergers. That's not exactly the case, but it's a rad marketing ploy. Averaging 250 300 shows a year, Honeytribe has been putting in the work, stroking the golden chalice of hard touring in search of the titanium egg of überstardom. 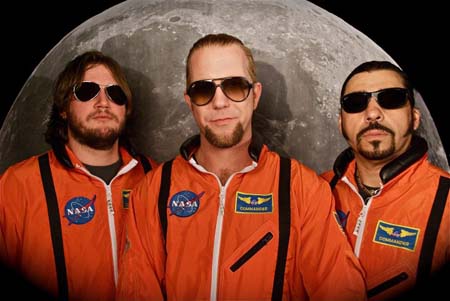 Although Allman Brothers Band front man Gregg Allman is his father don't call it nepotism! Devon Allman carved out his own musical path. "I didn't grow up in limos or backstage. I had a very normal childhood in the suburbs, eating McDonalds and playing soccer," says Allman. "By the time I was five; I was running off with my mother's Beatles records and learning all the words. I've always been kind of a lone wolf and I've worked my share of hard jobs, from a sweat shop printing T-shirts to a steel factory in Memphis to Burger King."

Steel factory and Burger King, huh? Welcome to the real world, boy! We make burgers and steel here in America! And occasionally T-shirts! And if you get out of line, we can drum up a pretty good war. So keep your mouth shut and your hair off the collarstick to the rock & roll.

Honeytribe traffics in Southern boogie and blues, white light soul and a little thing not many people have heard of called good old rock & roll. It ain't reinventing the wheel, but it's giving it a worthy spin. Frontman Allman should be thanking the gods of genetics as he has inherited both his father's soulful roadhouse-in-the-sticks voice and his late uncle Duane's effortless guitar wizardry. Hereditary jackpot! Very nice.