There's a renewed battle over the banned pesticide carbofuran. 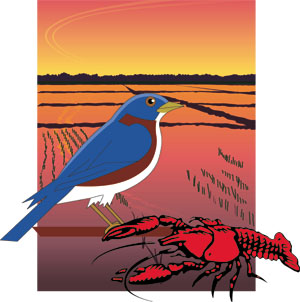 The diminutive rice water weevil is only one-eighth of an inch long, but it's at the heart of what state officials have called an "emergency situation" in southern Louisiana's rice fields. To prevent its larvae from chewing the roots of rice plants and either killing the plants or decreasing their rice yield, planes will fly above the fields this summer to distribute a pesticide. But which pesticide will filter downward is a matter of fierce concern for environmentalists.

Rice farmers have waged war on the pest "for as long as we've been growing rice in Louisiana," says Bobby Simoneaux, director of pesticides and environmental programs at the Louisiana Department of Agriculture and Forestry. Now, growers are hoping that a potent weapon in their arsenal will be restored to them: the pesticide carbofuran, which was phased out of use in rice fields beginning in 1991.

The Environmental Protection Agency banned the granular form of the pesticide because it is extremely toxic to birds, which mistake the granule of carbofuran for food. One granule packs a sufficient dose to kill a small songbird, says EPA spokesperson Enesta Jones. Secondary poisoning of birds of prey is also a risk, as eagles and hawks have been found dead after eating small mammals contaminated with the pesticide. Bird-watchers and environmentalists were relieved when the carbofuran was taken off the market. "It's a pesticide that we were particularly concerned about for a long time," says Gavin Shire, a spokesman for the American Bird Conservancy.

Despite the pesticide's known dangers, the Department of Agriculture applied in January for an emergency exemption to the ban that would allow farmers to treat up to 300,000 acres of weevil-infested fields with carbofuran. State officials acknowledge the environmental risk but stress that they can distribute carbofuran in a way that will minimize its dangers. They argue that the only other pesticides that target the water weevils also have an unfortunate side effect: they kill crawfish. As those pesticides are sprayed from the planes as a liquid, some of the plume drifts over to neighboring crawfish fields. Carbofuran is not as toxic to crawfish, and its granules would be less likely to be caught by the wind, Simoneaux says.

This combination of factors has brought the state to the EPA's doorstep. "This is an issue that is really unique to Louisiana, because we're the only state that has side-by-side rice and crawfish production," says Steve Linscombe, director of a rice research station run by the LSU Agricultural Center.

The EPA extended the public comment period on the proposed exemption until March 15 to allow environmental groups more time to study the application. The final weeks of the public comment period brought a flurry of letters, both for and against carbofuran. Private farmers and agricultural product businesses 'such as G&H Seed Company in Eunice ' defended the pesticide's use, while the American Bird Conservancy, which leads a network of environmental groups called the National Pesticide Reform Coalition, wrote a letter objecting to the state's exemption request.

Linscombe says the resistance to carbofuran is based on a misunderstanding about the way the pesticide is distributed. "We are dropping this as a granule into a flooded rice field, it sinks down, and it's not available for birds to pick up," he says. Jones, the spokesperson for the EPA, agrees that carbofuran use is safer in the flooded fields of Louisiana than it was on the dry soil of California farms, where birds could peck up the granules. "Most of the incidents [of bird kills] were associated with the corn, rice and grapes uses" of the pesticide, she says.

But environmentalists say that the distribution methods over rice fields are not precise enough to guarantee the safety of Louisiana's birds. "They're talking about thousands of acres, and its aerial distribution which allows for drift in the wind," says Shire. "Some [of the carbofuran] will almost certainly land on the hard ground surrounding the fields, and birds probably will die as a result." Accidental spills are also a concern. In a 1989 case in Colusa, Calif., state investigators found 1,985 dead ducks not in an agricultural field, but instead in an area that was frequently flown over by cropdusters on their way from an airstrip to the rice fields.

Environmentalists might be feeling a sense of déjà vu over this issue. In 2002, the Department of Agriculture asked for the same emergency exemption, which the EPA quickly granted. A coalition of 50 environmental groups, led by Defenders of Wildlife and the American Bird Conservancy, lobbied the agency for a public comment period to allow them to make an argument against carbofuran's return. The EPA agreed to a five-day public comment period and received more than 5,000 comments. In an about-face, the agency revoked the exemption. The situation in Louisiana may not have qualified as an emergency, the EPA wrote in 2002, and therefore the risk of poisoning birds couldn't be justified by the potential benefits of the pesticide. The agency also cited the public outcry in its decision.

This time, the EPA alerted environmental groups to the application for exemption and allowed a slightly longer public comment period.

Environmentalists hope for a repeat of the 2002 ruling. "It's a little troubling to see every year these almost routine applications for emergency exemptions," says Caroline Kennedy, the director of conservation initiatives for Defenders of Wildlife, noting that her group has fought other exemption requests in other parts of the country. "Carbofuran is extremely hazardous and it's supposed to be phased out. That hasn't changed."