Redistricting has served as a scary reminder of just how easily ambitious lawmakers can trigger socio-cultural displacements and destroy communities.  By Jeremy Alford

Some senators stood watching, while others were seated or grabbing a cup of coffee just off the floor. But most couldn't help but chuckle at the rookie-on-rookie action taking place behind the shared microphone on the podium. "Did you ever eat any bad gumbo, any bad boudin, anything like that, left you a bad taste in your mouth with the Acadian people?" asked Sen. Norby Chabert, a first termer who was reared on the banks of Bayou Little Caillou in Terrebonne Parish. "Was it the food?" 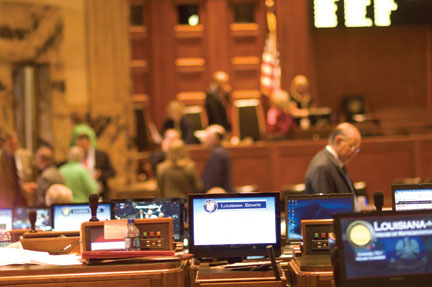 Redistricting has served as a scary reminder of just how easily ambitious lawmakers can trigger socio-cultural displacements and destroy communities.  By Jeremy Alford

Some senators stood watching, while others were seated or grabbing a cup of coffee just off the floor. But most couldn't help but chuckle at the rookie-on-rookie action taking place behind the shared microphone on the podium. "Did you ever eat any bad gumbo, any bad boudin, anything like that, left you a bad taste in your mouth with the Acadian people?" asked Sen. Norby Chabert, a first termer who was reared on the banks of Bayou Little Caillou in Terrebonne Parish. "Was it the food?"

Sen. Neil Riser, a fellow Republican from the north Louisiana community of Columbia, snapped back. "It wasn't the food."

Riser's particular redistricting plan, at one point during the special redistricting session, kept most of Acadiana whole, but lopped off Acadia, Jefferson Davis, St. Landry and St. Martin parishes and fed them to congressional districts represented by men from Shreveport and Monroe.

This led Chabert to describe the "Cajun people" as the "unspoken majority" in Riser's plan. Truth was, though, Riser wasn't alone. Practically every major piece of legislation that was put on the move in recent weeks sliced and diced south Louisiana in some unsavory fashion.

The parishes of Terrebonne and Lafourche have been on the chopping block for some time, definitely long before the special session convened. Practically every proposal divided the parishes into different congressional districts, even though they've been in the same boundaries for 190 years and currently have a shared media market, intergovernmental operations and secondary education partners.

What lawmakers seemed to care less about, however, was the United Houma Nation, a state-recognized tribe of approximately 17,000 Native Americans largely concentrated in Terrebonne-Lafourche. Despite a mention or two by local officials, lawmakers didn't spend much time in the special session considering the tribe's fate. "It's one of the largest Native American populations in Louisiana," Rep. Joe Harrison, R-Napoleonville, pleaded during the session.

In Jefferson Parish, a community of workers brought to the region by disasters ranging from Hurricane Katrina to the BP oil spill nearly culminated in a new Hispanic-majority district in the Legislature. Senate Secretary Glenn Koepp said the population wasn't sufficient, and lawmakers never asked another question about it.

It's a reality worthy of further exploration. In neighboring Texas, lawmakers are considering a proposal that would create Hispanic-based congressional districts in two of the four new seats it's slated to receive.

Surprisingly, one of the loudest voices came from the Acadiana region. Last week, several lawmakers in the House from the Lafayette area - GOP Rep. Page Cortez, Democratic Rep. Rickey Hardy, among others - took to the floor for an impromptu French language lesson. The significance was not lost on Rob Guidry, president of the Greater Lafayette Chamber of Commerce. "The culture of south Louisiana should speak for itself," Guidry said.

Here's a breakdown of why Acadiana felt the rub. It's also an overview of redistricting's biggest beefs and a list of reasons for the increased concerns about political gentrification:
North Louisiana: Gov. Bobby Jindal and Republicans have long wanted two vertical districts that protect U.S. Reps. John Fleming, R-Shreveport, and Rodney Alexander, R-Quitman; Dems and a few GOP lawmakers prefer two horizontal districts along I-20 that would allow the opportunity for minority representation.

Coastal Louisiana: The sister parishes of Terrebonne and Lafourche anchor the 3rd Congressional District, currently occupied by U.S. Rep. Jeff Landry, R-New Iberia; he's being targeted by Congressman Charles Boustany, R-Lafayette, and negotiations have hinged on what to do with their two coastal districts. It has been common knowledge for quite a while that Louisiana would lose one of its seven congressional seats, and the 3rd District is the odds-on loser.

The Feds: Louisiana is required to ensure that minority populations are afforded a chance to elect a representative of their choosing; this has become an issue in debates involving New Orleans, Baton Rouge, Shreveport and a handful of other locales.

What's missing from this list? Acadiana, basically. Just consider the membership of the Senate and Governmental Affairs Committee, which is leading redistricting in the Upper Chamber. "We have no representation at all on this committee," said Sen. Fred Mills, R-Parks.

Then there's the race issue. The most recent U.S. Census survey revealed that blacks account for 32 percent of the Bayou State's population. Yet lawmakers have failed to get behind a plan that affords blacks one-third of Louisiana's U.S. House delegation.

Many lawmakers, like Sen. Sharon Weston Broome, D-Baton Rouge, didn't tap dance around the topic when pushing plans with two minority seats. "I think it's pretty obvious this is not an incumbent protection plan," Broome said.

Race was a topic before the special session, obviously during it and it will certainly remain on and under the surface in future redistricting efforts. In fact, it all curiously came to a head during a meeting of the Senate and Governmental Affairs Committee during the session's opening days.

When reviewing the red and green testimony cards, Chairman Robert Kostelka, R-Monroe, came across one of a different shade that happened to belong to the demographer hired by the Legislative Black Caucus. Almost to himself, Kostelka wondered aloud into an open mic, "You're a different color than everyone else."

Several committee members chuckled, like Sen. Rob Marionneaux, D-Livonia, who is white and playfully chided his African-American colleague Sen. Lydia Jackson, D-Shreveport, when she couldn't remember his name during debate. "We all look alike," Marionneaux joked.

"And I'm Karen," Jackson replied with a giggle, referring to Sen. Karen Carter Peterson, D-New Orleans, who just happens to be one of the Senate's other black women.
All of this might prompt a few folks to think back to early 2009, when the Public Affairs Research Council, a Baton Rouge-based good government group, recommended that the state create a special commission accountable to the public to guide redistricting. Such a concept would have kept the politics out of the process and put Louisiana's most unique communities in a position of power - and that's probably sounding like a good idea right now to more than a few people.