Could Michael Sandlin, the imperious Grosse Tete diesel purveyor and tiger jail warden, finally be caught on a technicality? 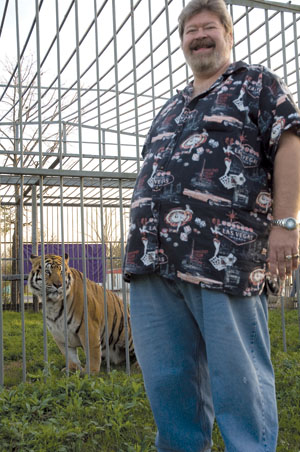 Could Michael Sandlin, the imperious Grosse Tete diesel purveyor and tiger jail warden, finally be caught on a technicality?

The Advocate is reporting that an animal rights group has filed a lawsuit against the Louisiana Department of Wildlife and Fisheries seeking to have Sandlin's 550-pound Bengal-Siberian tiger, creatively named Tony, removed from the 700-square-foot enclosure at the Tiger Truck Stop on Interstate 10. The roadside attraction once boasted as many as six tigers. Tony is the sole remaining ward of a cage that, when the breeze blows from the west, is downwind from the diesel and gasoline fumes of the shabby truckstop's pumps.

The Animal Legal Defense Fund filed suit against LDWF challenging the agency's granting of a "Possession of Potentially Dangerous Wild Quadrupeds, Big Exotic Cats and Non-Human Primates" permit to Sandlin in late 2009, ruling that he should be grandfathered in because he owned the cat prior to the enactment of a 2006 state law prohibiting private ownership of big cats and other exotic animals.

But the Portland, Ore.-based group is challenging Sandlin's legal ownership of the animal citing a 1993 ordinance in Iberville Parish that also prohibits exotic-animal ownership. If Sandlin didn't legally own the 10-year-old Tony due to the Iberville law, the suit reasons, he cannot legally be grandfathered in and granted a permit from the state.

Sandlin was unavailable for comment with The Advocate. Read that story here.