C'EST BON
What a difference a year makes.

COUILLON
OK, we get it: Congressman Jeff Landry, R-City on a Hill, is all about baseball, hot dogs, apple pie and the Big Man in the Sky, plus putting a stop to America's descent into socialism, egalitarianism, secularism, feminism and ism-ism.

C'EST BON
What a difference a year makes. Last year Lafayette Parish retail sales got off to a sluggish start, trailing 2009 by 14 percent during the first two months and still off almost 11 percent by March. Sales soon after began to close the gap, however, and we ended 2010 up a small 0.78 percent, thanks in large part to a strong showing in December. In the final month of 2010, sales topped the $517 million mark, making it the fourth highest month on record for the parish. Total sales for the year were $4.8 billion. It was a clear sign of the parish's resilience in the face of the drilling moratorium. And it appears that the momentum is carrying over into 2011. For the first two months figures are already ahead 8.64 percent, with February showing a 9.5 percent increase over February a year ago. Sales in January totaled $369.8 million, and in February they grew to $382 million.
**
PAS BON**
And then there's Lafayette's hotel business, which isn't exactly fueling our economic engine. Lafayette hotel operators met a few weeks ago with members of the Durel administration to stress their opposition to the Parc Lafayette TIF and to reiterate what was reported in The Advocate: The Lafayette hospitality industry is under stress. It was underscored last week when formal notice was sent to a long list of creditors including St. Martin Bank, which is seeking more than $12 million, that Zeus Investments LLC, owner of Crowne Plaza Hotel, has filed for Chapter 11 bankruptcy. The Houston company's troubles are likely more about poor management at the luxury hotel than a true thermometer for Hub City hospitality. But the Crowne Plaza pickle casts in doubt the old adage, "Build it and they will come." 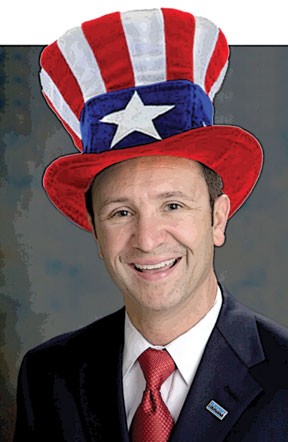 COUILLON
OK, we get it: Congressman Jeff Landry, R-City on a Hill, is all about baseball, hot dogs, apple pie and the Big Man in the Sky, plus putting a stop to America's descent into socialism, egalitarianism, secularism, feminism and ism-ism. Since being sworn into office in January, his D.C. office has stippled our in-box with a fusillade of press releases touting everything from his new membership in Congress' Values Action Team - it's like the A Team without cigars or black people - to the oily-edged new one he tore Secretary of the Interior Ken Salazar over the "permatorium" that is utterly destroying our economy. Last week came final proof that Landry earned an A in Demagoguery 101: a cynical announcement that he would forego his congressional pay in the event of a federal shutdown, which evidently would have interrupted pay for members of the U.S. military. But Landry isn't the couillon here; it's The Teche News, which published Landry's press release verbatim, complete with a few altercations between nouns and verbs. Choice cut: "Our nation owes its liberty to the brave men and women in our Armed Forces who risk their lives every day to protect our freedoms," said Landry. "Our brave military deserve to be paid what is owed to them..."