Darrell Robinson has listened to the first heart beats of countless babies, but it's playing alongside the beat of Grammy winners like Buckwheat Zydeco that really ignites the passion in this local surgeon. By Lisa Hanchey

Dr. Darrell Robinson's story reads like a Horatio Alger novel. The Chicago-born native started playing the guitar at age 12, and as a homeless teenager, supported himself by playing at local dives. 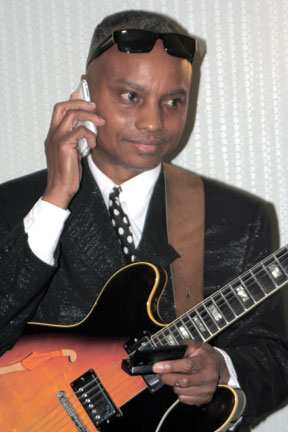 "I have literally gotten beeped off stage sometimes to go do
a delivery or C-section," says Dr. Darrell Robinson.

Darrell Robinson has listened to the first heart beats of countless babies, but it's playing alongside the beat of Grammy winners like Buckwheat Zydeco that really ignites the passion in this local surgeon. By Lisa Hanchey

Dr. Darrell Robinson's story reads like a Horatio Alger novel. The Chicago-born native started playing the guitar at age 12, and as a homeless teenager, supported himself by playing at local dives.

"I had to play in order to eat," he says matter-of-factly. A lot of his band members were hard-core gang members. "I can vividly remember going to rehearsal at the age of 15 or 16, and these guys would have pistols on top of their guitar amplifiers," he says.

Luckily he was too small to be recruited by any gangs, so Robinson decided to get an education instead. He started college at the University of Illinois while still in high school (Chicago is one of the few cities allowing students to attend college without a diploma). At night, he went to college and worked at the post office, squeezing in music gigs. By day, he attended high school. But surviving on only three or four hours of sleep a day proved to be a bit much. "I was struggling," he says.

His life was about to change. Robinson had found a mentor in his math tutor, Dr. Joseph Smith. As the two developed a relationship, Smith eventually suggested he consider Meharry Medical College, a historically black institution in Nashville. To increase Robinson's chances of getting into Meharry, Smith thought he should first transfer to Tennessee State University, also in Nashville. Robinson, then 17, left Chicago for Tennessee and enrolled at TSU (Oprah Winfrey was a year ahead of him). One day, he decided to take Smith up on his recommendation to explore med school and took a walk a mile down the road to check out Meharry.

"It was really a spectacular university with a lot of cultural heritage, and some phenomenal people who went there," he says. Just out of the blue that same afternoon, Robinson's bass player, a med school student, asked Robinson to accompany him to the emergency room where he watched the aspiring doc stitch up a patient. Impressed by what he saw, he decided to pursue medicine at Meharry.

During medical school, Robinson found his calling as an obstetrician/gynecologist when he delivered his first baby in 1978. He depended on his guitar playing to get through school. "I had to play in order to get my books," he said. "If I didn't play well, I didn't have a roof over my head." He transferred to Northwestern University in Chicago for his residency in OB/GYN surgery. "I left Chicago homeless and came back with an MD," he says.

Once he became an OB/GYN, he worked as locum tenens (temporary doctor), traveling throughout the country and acquiring licenses in 14 states along the way. He says he was treated like royalty, traveling in jets and being picked up in limousines: "It was like being a rock star, but I was a doctor."

In 1989, he served as Surgeon General of Hill Air Force Base in Salt Lake City, Utah, overseeing 22,000 patients.

After three years as a traveling doc, Robinson returned to his home town to practice medicine. Occasionally, he consulted with an older psychiatrist, Dr. James Terry, and referred patients to Terry. One day, when Robinson was 34, Terry called him about another situation. "He told me over the phone, on a Wednesday, between pap smears," Robinson recalls, "that the real connection is that I'm your dad.'"

Robinson was shocked by the revelation, saying throughout his childhood, he had believed that his stepfather was his real dad. That evening, Robinson went to Terry's home, where his biological father showed him pictures of himself as a child. "It was so ironic that, years later, I would become a doctor and a professional musician, like he was," Robinson says. "And, we ended up going to the same university,  Northwestern."

After more conversations, Robinson learned that his father had been following him all along. "The person who really stimulated me from a distance to go to Tennessee State and Meharry College was my real father," he says. "He came to my high school graduation. He was watching me from a distance for all of those years, and having other people talking to me to influence my life. It was his friend [Robinson's mentor] who told me that day, when I was 17, to consider changing from the University of Illinois to Tennessee State University."

Once he reconnected with his dad, Robinson continued the relationship for a decade. Ten years ago, Terry died of lung cancer. It wasn't until after Terry's death that Robinson realized just how alike they were - and how different he had been musically and academically from his brothers. "That's when I realized where the genes for the music came from," he says. "I had this genetic thing for music that [my brothers] didn't have. And, I guess, the doctor thing, too."

Robinson moved on with his career, heading to Pennsylvania to do home births in Amish Country. With no electricity, he was delivering babies by candlelight. His then-spouse decided to continue her midwifery education, finding only two places in the country with such programs. One was in Louisiana. Robinson was also offered a position as department chair at Abbeville General Hospital. So, the couple headed south.

While practicing in Abbeville, Robinson set up an office on the Women's and Children's Hospital campus in Lafayette. His reputation, along with his former wife's midwife connections, led to an offer to become the premier medical director of Gentle Choices, a birth center, in 2006.

Located at 1424 St. John Street next to Lourdes Hospital, Gentle Choices is the only facility in the Acadiana area providing natural births in a homelike environment. Patients can choose to have their babies in birthing tubs or suites, assisted by midwives and professional auxiliary staff. As medical director, Robinson oversees the births, transferring patients to the hospital if necessary.

Today, Robinson practices medicine full-time - one day a week at his private practice in Abbeville, and the rest of the time at Gentle Choices. One day, he would like to franchise Gentle Choices all over the state.

But he'll never stop the music. "If it hadn't been for the music, I would probably not be a doctor today," he says. "My passion is really my music; my job just happens to be OB/GYN surgeon."

That job allows him to get so much fulfillment from his music, but balancing a musical career with his practice can be challenging. "I have literally gotten beeped off stage sometimes to go do a delivery or C-section," he says. This happened last year when he played at the opening gig for Rhythms on the River. He got paged right before the outdoor concert, rushed off the stage, delivered a baby, and was back to play the first song - all without missing a beat.

"Doc," as his band members call him, fits in guitar gigs whenever he can. During his colorful career, he has performed all over the U.S. and Europe, landing jobs in London, Paris and Amsterdam. While in the United Kingdom, he gained acclaim as a jazz guitarist.

Living in the heart of Acadiana, Robinson learned to play zydeco from the best - 2009 Grammy winner Buckwheat Zydeco. He also has played at the House of Blues in his native Chicago. Recently, he performed as guest artist with the renowned musician at the Acadiana Center for the Arts. For the past three years, he has performed at the New Orleans Jazz Fest, and is playing with L'il Buck Sinegal Blues Band on May 1. His first CD, Jazzatude, is doing well in Chicago, and his second CD is about to be released. "Louisiana has been great for me in terms of the music," he says. "I don't think if I'd stayed in Chicago it would have taken off, and I would not have had the chance to tour with Grammy-winning bands and be on stage with some very famous people."

About three decades after taking a mile-long walk that forever shaped his professional life, Dr. Darrell Robinson is still just as ambitious as he was at 17: He's hoping for a Grammy nomination. "That's on my bucket list," he says. "If I don't do anything else in life, that's what I would love to do - be nominated for a Grammy."