A new coffee table book celebrates the coffee tables - and armoires, dressers,
cabinets and chairs - of Louisiana's Cajun and Creole past. By Anna Purdy

Seven years and thousands of miles traveled to snap photographs in the homes of collectors as well as museums has culminated in Furnishing Louisiana: Creole and Acadiana Furniture, 1735 - 1835 ...

A new coffee table book celebrates the coffee tables - and armoires, dressers,
cabinets and chairs - of Louisiana's Cajun and Creole past. By Anna Purdy 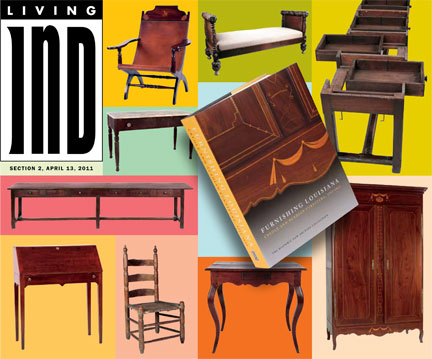 Seven years and thousands of miles traveled to snap photographs in the homes of collectors as well as museums has culminated in Furnishing Louisiana: Creole and Acadiana Furniture, 1735 - 1835. Published by the Historic New Orleans Collection - a part of New Orleans Historical Society - it is a tome of well over 500 pages packed with pictures and details of every type of furniture you grew up with in Acadiana. Flipping through the verdant field of photography you can't help but think things like, "My grandfather had that rocker in his room!" Like the Creole-style slat-back side chair or the cypress armoires, most of the pictures are familiar to those who have lived here.

Much of the furniture in Furnishing Louisiana comes from private collections here in Acadiana, and while it certainly is a collectable niche market, many pieces have been in the same home for 200 years.

So why is it there aren't more books like this about Louisiana furniture? Explanations abound, but the first lies in the complexity of the subject. Early Louisianans did, indeed, import furniture from France, and a French influence is visible on most of the earliest locally made pieces. But other regions and other cultures - Canada, the Caribbean, Anglo America - also made their mark, says John T. Magill of The Historic New Orleans Collection in the book's introduction. The history of oral tradition in Louisiana life also created a mythology that celebrated Francophone culture specifically and European culture in general. Ties to any other place were downplayed, not to mention that of course records on furniture purchases - by whom and from where - are few and far between during this time period.

A major shift occurred in 1968. This was the year New Orleans celebrated her 250th birthday and a man with the unfortunate, if memorable, name of Felix Herwig Kuntz came along. Kuntz was a lifelong bachelor who dedicated his life to collecting Louisiana treasures. He came from money - one of two sons of Emile and Rosemonde Kuntz. The Kuntz family enjoyed a brief but prosperous tenure as one of the most notably wealthy families in the New Orleans area. Felix was the originator of a collection that included textiles, glassware, metals, ceramics, oil paintings, sculptures and silverware as well as furnishings. In '68 Felix decided to share his private collection with the world at the Louisiana State Museum in three catalogued exhibitions that ran, because the collection was so immense, from January through July.

The Kuntz collection inspired interest locally and around the world, and as word spread, the unique vision of Louisiana artwork and furnishings established a reputation. Four years later another show appeared from February to July called "Early Furniture of Louisiana."

Flash forward another two years, and it all gets brought back to Lafayette. The Art Center for Southwestern Louisiana at USL, now known as the much more alliterative University of Louisiana at Lafayette, got a jump start on the U.S. bicentennial by hosting "Louisiana French Furnishings, 1700 - 1830." This highlighted Acadian furniture and "more sophisticated Creole pieces," writes Magill. This showing also boasted a symposium comprising collectors, scholars and antique dealers from all over North America.

Furnishing Louisiana: Creole and Acadiana Furniture, 1735 - 1835 pays homage to the woods employed, the hardware, the history and those who made the furniture. And it isn't just about furniture - it is a sociological and anthropological step back to a time that doesn't have a lot of written history.

The fact that so many pieces of furniture are still around after hundreds of years shows how well Louisiana style and fashion have stood the test of time.