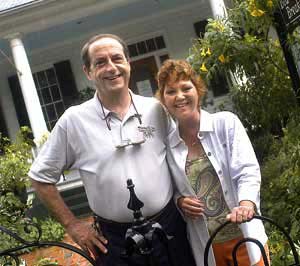 Kane and Dempsey will reopen Le Rosier's restaurant in August for weekday lunch and plan to launch a weekend dinner menu in September. If the community supports it, the restaurant will eventually have a full nightly offering. "We'll see how much more we can take," says Kane, who is leasing Le Rosier from owners David and Carolyn Groner.

Pat Kahle, director of the city's noted tourist attraction Shadows-on-the-Teche, located across Main Street from Le Rosier, says the site has the potential to play an important role in the revitalization under way in downtown New Iberia. The National Trust for Historic Preservation, which owns the Shadows, recently recognized New Iberia's downtown as one of the top five in the country. "We've missed having a restaurant there," Kahle says.

But Kane and Dempsey have quite a reputation to uphold, Kahle says. With owner Hallman Woods II's son, Hallman III, as Le Rosier's chef, the restaurant garnered national attention in the mid-'90s. Food & Wine magazine named the younger Woods one of "America's Best New Chefs" among only eight from New York to San Francisco. "It was wonderful," Kahle says.

While the menu is not finalized, Kane wants the restaurant's fare to range from regional southern American to Spanish and Italian dishes. "We've been toying with that off and on," he says. Tables will be added to the porch, which overlooks the building's signature gardens, making al fresco dining a feature of the B&B. Including outdoor dining, the restaurant can accommodate about 60 guests, and a back dining space for up to 40 will be offered for special functions.

Kane's background is electronics industry sales, though he's quite versed in the kitchen, and Dempsey's is journalism (she's a contributing writer to The Independent Weekly), but she shares Kane's passion for food and cooking. For a couple of years in the early 1990s, Kane worked alongside then-Prejean's award-winning Chef James Graham, later managed Clee Dunning's Gordon Square kitchen for several years, and from 2002 to early this year worked with Bentley Suire at The Filling Station downtown, a job that led him to Le Rosier.

When they set out to find an operator, the Groners approached Suire, who told Kane and Dempsey about the opportunity. The Groners had moved into the 1870s structure, which they purchased from attorney Woods, after their home was destroyed by Hurricane Lili in late 2002. They could not find the time to redevelop the restaurant; David is an attorney, and Carolyn is the food and beverage director at Cypress Bayou Casino in Charenton, where she also manages the fine dining establishment Mr. Lester's Steakhouse.

The home was originally built by the Koch family, and it was Woods who added the B&B rooms in the back of the house, bringing the total square footage of the two buildings to about 7,000. The Groners redecorated the guest rooms, giving each its own color scheme and identity with appointments like Turkish cotton towels, down comforters, antiques and original works of art. "Each one is very different," Dempsey says. "Carolyn has a genius for decorating. She's created rooms that make you feel like you're staying in the opulent home of a gracious friend."

Kane and Dempsey are taking over the Groners' living quarters and have already hired a local marketing specialist, Debbey Ryan of Prescriptive Marketing.

The couple is banking on success resulting from full-time devotion to the property, in addition to proximity to several tourist destinations, like the Shadows, Konriko Rice Mill and Avery Island/Tabasco. "[New Iberia's] tourism has increased in the last couple of years," Kane says. "Le Rosier is an established brand; it's a recognized name."