Being crucified on television by your opponent has become a rite of political passage, but one operative has elevated it to an art form. At least that's his spin. 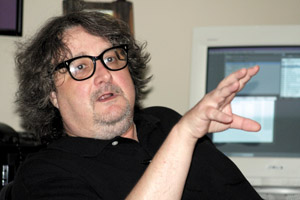 George Kennedy barrels in wearing an untucked black polo shirt and a pair of sunglasses partly hidden beneath a thick mop of black and gray locks. He fights briefly with the work bag flung over his shoulder and says something to the receptionist about a video press release. His frantic pace continues down a hallway and into a room filled with monitors, where he rambles a bit about a digital something-or-another.

Kennedy seems comfortable here at Compose Digital Design in Baton Rouge, a hub of sorts for some of the most talented communications specialists in the state. He's a longtime client, but it's difficult to tell. His awards are displayed in the lobby alongside accolades for the partners, and he enjoys free reign over the entire facility. There's a certain "Oh-that's-just-George" quality about the whole thing.

He plops his bulky frame down into a swivel chair and replaces his shades with a bold pair of thick-rims. At 51, he bears a slight resemblance to the late comedian John Belushi, complete with animated body language, curious eyes and wild hair. In recent years, however, this colorful character has become the political toast of Republican and Democratic circles, having pushed a number of candidates past the victory line with his unique take on campaign commercials.

"If you really want to learn about the 30-second format, go buy a book with editorial cartoons and study them," Kennedy says, cueing up a video on a computer. "But the best way to judge a spot is to cut off the sound." He presses a button and turns toward the monitor. Secretary of State-elect Jay Dardenne walks in slow motion through an empty Senate chamber, careful not to look into the camera's lens. It's in black and white and lists several endorsements for the Baton Rouge attorney.

Even without the narration, the stately spot is still effective. It has netted Kennedy a few national awards and has been in heavy rotation several times, but it's not the kind of lowdown, hard-hitting images the slickster is know for. Kennedy is the latest king of mud, the prince of political punch, the man who put the sting back in Louisiana's campaign advertising. The titles are comical to Kennedy, as they should be, and he refuses to embrace them.

Kennedy prefers to say he's in the "persuasion business" and calls his 30-second attack ads "high concept," referring to a cinematic style that is complex, very involved and thoroughly polished. He says all claims are well researched and cited, and nothing is ever fabricated. It's a multi-layered process that can be costly for campaigns. For instance, a recent two-day shoot for one of Kennedy's negative spots had an $80,000 budget. In contrast, a positive ad can be produced for as little as $1,500. "And that's nothing more than the truth well told," he says.

Various campaign workers file in and out of the edit bay, backing up Kennedy's jokes with hearty laughter or shaking their head in agreement with his guerilla-like approach. His revelations come out in short bursts: "Storyboards are for sissies." "I tend to think in metaphors." "Sometimes I pluck ideas out of the air." But his philosophy is best seen, not heard, so Kennedy cues up another Dardenne campaign ad.

This time it's the spot that knocked Mike Francis, a Crowley native who now lives in Lafayette, out of the secretary of state's race. The ad depicts Francis as a balding, portly old man wearing blue tights and a red cape. The narrator dredges up an old lawsuit involving his former wife and questions why Francis lost his chairmanship of the state Republican Party.

Sitting in a room filled with action heroes and other superhero kitsch, Kennedy says he doesn't remember where the idea for the spot came from. But he does know what kind of impact it had on the race. "I don't think I've ever really elected anyone, but people hire me because I can make their numbers go up with this," Kennedy says, as his eyes draw to the back of the room. It's Dardenne, his star client, arriving early for a meeting that morning.

As a longtime ethics cheerleader, Dardenne's decision to lash out at Francis was somewhat out of character, but there's no regret in his voice. "I thought they were effective," he says. "As a practical matter, I was also getting beat up on by them for the past six months on the Internet and everywhere else." Surprisingly, the negative spot ran for only three days during the recent election cycle, compared to 27 days of positive spots. Nonetheless, there's little doubt which images will remain in the mind of voters.

That's why Kennedy is one of the new superstars, following in the footsteps of previous media darlings like pollsters and opposition researchers. Kennedy admits with a grin he is the "flavor of the month" but adds it's only because elections are becoming so close. Muddy messages are needed to help weed out wedge issues and, again, they're effective. "People tend to remember the negative, and the press eats it up, too," he says.

In the near future, however, Kennedy says more candidates will move away from sponsoring negative attacks, leaving it to outside groups to do the heavy lifting. "You can expect to start seeing more independent expenditures from third parties in the near future," he says, "especially during the governor's election." As to who will be handling the bulk of this new revenue stream, it won't be all Kennedy.

"The phone has been ringing a lot, but I can't take them all on," he says. "I can only handle three or four clients a year. My brother will probably tell you that's because I'm lazy." His brother, referred to during the interview as simply John, is better known around Louisiana as the state's longtime treasurer. It seems politics run in the family, but the similarities stop there.

Lee Scioneaux, a partner at Compose Digital Design who has known George Kennedy for 15 years, says the Zachary native dances to his own beat ' literally. When work is slow, he says Kennedy likes to break out an electronic keyboard, along with his best Elvis impersonation, and serenade unsuspecting clients and staff. "You just never know what to expect," Scioneaux says. "He's just his own guy. When candidates sit down with him, there's probably a bit of shell shock at first, but you quickly learn there's nothing lackadaisical or whimsical about him. There is a method to the madness."

Kennedy also put the hit out on state Sen. James David Cain, a Republican from Dry Creek, during the insurance commissioner's race. The devastating commercial depicted a convict being handcuffed in prison and mentioned that three other insurance commissioners have spent time in the pokey. Pundits credit the ad for knocking Cain out of the race, and Charlie Davis, Cain's campaign manager, admits it didn't help. Yet, from one operative to another, he can't help but compliment. "I think Kennedy's ads did what they were supposed to do," Davis says. "The one depicting Sen. Cain was distorted, but it was also very effective."

Joshua P. Stockley, president of the Louisiana Political Science Association and professor of government at Nicholls State University, says that is the precise reason why people like Kennedy will remain in high demand. There's a very simple reason why candidates and others are willing to shell out millions for the dirt. "It works," Stockley says. "I mean, if negative campaign advertising didn't work, it wouldn't be used."

While the politician sponsoring the negative spot benefits immediately from the swipe, the person being attacked may suffer the residual effects of an effective ad for some time. Case in point: the 2004 Kennedy ad that depicted former Baton Rouge Mayor Bobby Simpson as a chimpanzee counting money. But don't tell that to Kennedy, because this "persuasion" expert likely won't care. The loser can cry in his cornflakes all he wants, Kennedy says, but this "persuasion" expert won't be losing sleep for going on the attack.

After all, it's the American way. Right?

"Look, that's just the way things are," Kennedy says. "This is the life they have chosen. Everyone knows coming in that this is a full contact sport. It's politics."