After a week in the dark and some fancy political maneuvering, the $27.5 million LITE center gets $150,000 to help turn on its lights. 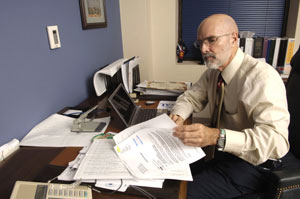 An air of uncertainty loomed over the $27.5 million Louisiana Immersive Technologies Enterprise project for about a week, as Lafayette Economic Development Authority and at least one Lafayette Consolidated Government councilman scrambled for a re-vote to guarantee the facility can turn its lights on in April 2006.

Anchored by one of the world's most powerful supercomputers, LITE is a state-funded joint project with LEDA and UL Lafayette. Proponents say the research facility and its 3D capabilities will be a useful tool for a variety of industries, including oil and gas, medical, architecture and manufacturing ' and help establish Lafayette as a technological epicenter. LEDA is in charge of managing the facility and plans to seed LITE's operating budget for the first few years. To do so, LEDA asked the council's permission to roll forward its property tax millage to the maximum level set by voters, 1.92 mills. In 2004, LEDA was funded by a 1.79 mill on property tax paid by Lafayette Parish residents, which amounted to $1.66 million, according to the parish tax assessor's office.

In an Oct. 25 special meeting, however, LEDA's proposal fell one vote shy of the six needed to implement the increase. (Roll forward measures require six of nine votes; most others require five.) Councilmen Rob Stevenson, Lenwood Broussard and Bobby Badeaux voted against the proposal, with Marc Mouton, Randy Menard, Louis Benjamin, Chris Williams and Dale Bourgeois supporting it. Councilman Bruce Conque was in North Carolina on city-parish business and did not attend the meeting.

LEDA President Gregg Gothreaux was taken aback by the defeat and didn't have a specific contingency plan. "The backup plan was to cut programs and establish different priorities."

On Monday, Oct. 31, barely within the required 24-hour notice window to call a special meeting, Conque squeezed in a request to meet the following day to revisit the issue, and the proposal passed 6-2.

Council members agree that LITE, under construction at UL's Research Park near LEDA, is a big plus for the community's ability to attract high-tech industry and a perfect complement to Lafayette's fiber-to-the-home initiative. But at least two of them are steaming over how this voting fiasco went down, and both say the timing is poor for any measures that take additional money out of taxpayers' pockets. In an act of defiance, Stevenson left the Nov. 1 special meeting without casting his vote.

"I absolutely think it's a fantastic project, but sometimes we have to live within our means," Stevenson says. "I just didn't think it was right to slip that in," he adds, arguing that Conque had plenty of time to give notice of the special meeting. "My contention is that just because things are legal, it doesn't make them right."

Conque says putting the proposal on a regularly scheduled meeting would have backed it up to Nov. 15, too late to meet the Louisiana Tax Commission's 2005 deadline for receiving tax rolls to send out bills. Conque also says he didn't get the final word from LCG's legal counsel until Monday. "We just wanted to make sure everything we were doing [for the re-vote] was absolutely legal, and we didn't get that verification till Monday morning."

Broussard says he was prepared to support the proposal at the council's regular meeting Sept. 20, when it was originally scheduled for final adoption. The opposing councilmen believe that LEDA pulled the proposal in September out of concern that it did not have the votes lined up, eventually forcing the two special meetings. Gothreaux says the decision to pull the September meeting was hurricane-related, and refused to address speculation on the outcome of a September vote.

Broussard now says the economic uncertainty caused by Hurricane Rita coupled with what he calls LEDA's "manipulation" of the political process has changed his position. "It's politics 101. This is the best political maneuvering I've seen, and I've been part of some," Broussard says. "What would have happened to them if it had failed Tuesday night? Maybe their budget needs to be scrutinized."

Stevenson is convinced LEDA had other options. "LEDA has a millage, and they're doing OK," he says. "They could have cut back on marketing and some operating expenses. That's what I've heard from a couple of people inside [of LEDA]."

He also argues that property owners already have bigger tax obligations because of 2004's reassessment and will likely get hit again in 2008. "When the property is reassessed, I think it's going to be through the roof," he says. "I think people will be shocked by what they see."

Should tax assessments increase in 2008, the council will be forced to roll back LEDA's millage rate to equal 2007's revenues.

Gothreaux says other agencies requested and received roll forwards last year but that LEDA decided to wait for a better assessment of LITE's operating costs. The facility is facing higher utility expenses than the approximately $420,000 originally estimated for costs like utilities, insurance and security systems (this does not include salaries ' which will be funded initially by UL and LEDA ' or marketing costs). Gothreaux attributes the increase to the state's investment in a more powerful supercomputer, which he says offers the world's best graphics capabilities, and LITE's opportunity to host a second supercomputer because of the LONI Network ' both of which will add about $150,000 in utility costs to the center.

Though LITE's budget has not been finalized, Gothreaux says most operating costs will be covered by $440,000 in annual lease revenue from Global Data Systems (its chief technology integrator and data center operator), and Merlin Oil & Gas Inc. UL will also use some space. LITE has leased 22,000 square feet and has 13,000 square feet of space available for lease.

Another $60,000 in annual usage commitments for three years from three oil and gas and engineering firms will cover expenses like marketing and equipment replacement. The two conference rooms, two auditoriums and "cave" are all fully-immersive 3D venues, and daily rates are $500 for the conference rooms, $250 to $1,000 for the auditoriums and $3,000 for the cave ' the only 3D facility that allows for a virtual "walk through."

Gothreaux says the anticipated increase in utility costs is the primary but not the sole reason LEDA requested the roll forward. This year the Louisiana Department of Economic Development boosted its marketing budget from $1 million to $5 million to recruit new businesses to the state, and the expectation is that LEDA will also ratchet up its effort, he says. "When the state ups its investment, they ask us to participate."

In three years, when LITE is supposed to be self-sustaining, LEDA will use the additional funds for long-term investment in the community through projects like industrial parks, Gothreaux says.

For his part, the LEDA official is still trying to figure out how the millage issue spiraled out of control, and he's assuming blame for not effectively communicating his organization's needs. Says Gothreaux, "In retrospect, if I would have provided an informational briefing on LITE and the many issues which drive up the cost of economic development and the investment aspects of that millage adjustment, things would have gone smoother."