"We got a lot more than basketball from him. Everyone who played for him knew what kind of man he was." 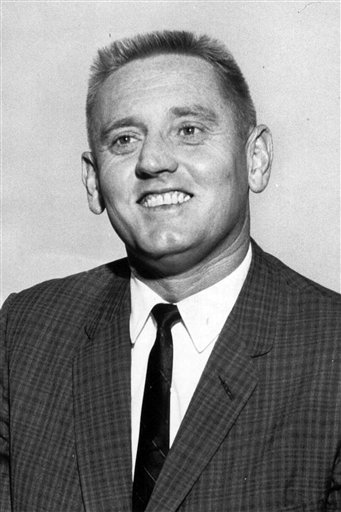 There were many joyous moments in Lafayette three months ago when SLI/USL/UL basketball alumni players, coaches and other staff members gathered for a reunion during a Ragin' Cajun home weekend.

The Cajuns won over UL Monroe, snapping a losing streak in Sun Belt Conference play and going on to win their last 10 straight league games and claim a share of the Sun Belt West title.

But there was still a big hole in the weekend, and now that hole is a lot bigger.

Beryl Shipley was too tired from his battle with cancer to attend in person - although he tried his best - and wound up appearing only on video in which he addressed both the reunion honorees and the fans on hand. His taped message drew the biggest response of the evening, the fans trying their hardest to send a message of thanks back to Coach Shipley for bringing them something very special.

The former players, especially those who played for the winningest coach in Bulldog/Cajun history, had already given their thanks. In fact, many of them headed for Shipley's house immediately after the game to go and visit their friend and mentor.

Those visits had been regular parts of many of their lives for many years, even not so long ago when Coach Shipley was in better health.

Now those visits are over. The man who made Cajun basketball "big time," and after that suffered through mostly unjust criticism for severe NCAA sanctions to the program, gave up his battle with lung cancer late last Friday night at his home.

Many will still come and visit Dolores, his wife of more than 60 years, and many will still be in touch with daughters Marilyn, Amy and Patty. But for them, and for all UL basketball fans, an era ended last weekend - and not just because the man had a 293-126 record, or 15 out of 16 winning seasons, seven conference championships and nine Coach of the Year honors.

If Beryl Shipley had never won a basketball game - and he always harped that it was his players who won games, not him - he would have still had a major impact on Acadiana, Louisiana and the Deep South for more than one reason.

"I graduated, I got married, I had three children and I worked for 33.5 years for a major company and retired," says former USL All-American Dean Church. "I have enjoyed every part of my life and would not trade it for anything. All of this was possible because of Coach Shipley. It had nothing to do with him showing me how to shoot a jump shot or throw a pass. It had everything to do with Coach Shipley teaching me the proper values to get me through the game of life."

A testament to how close Shipley became to his players: The coach served as best man at Church's wedding.

"Beryl touched the lives of so many in such a positive way," says Jimmy Dykes, who both played for and coached under Shipley. "His greatest asset as a coach was his ability to get the most out of people. The team concept was the trademark of every Beryl Shipley-coached team, and that carries through even today with so many of his players remaining so close to Beryl and Dolores."

"There was nobody any better at the Xs and Os," says Jerry Flake, also a former All-American. "But we got a lot more than basketball from him. Everyone who played for him knew what kind of man he was."

Many others didn't, though, and Shipley ran afoul of some locals, athletic officials and state political figures when he became the first coach in the Deep South at a traditionally white university to actively recruit black athletes.

The segregationists lined up, and Shipley and his team became targets for racial abuse when they would go on the road.

"No question he made enemies," says long-time Daily Advertiser sports editor Bruce Brown, a USL student during the program's heyday under Shipley in the late '60s-early '70s. "There were the segregationists, as well as others with racial agendas determined to fight integration."

"He lost some friends who didn't approve of integration of athletic teams," Church says. "But he also produced very good teams backed by both the white and black communities of Lafayette. There were no boycotts, sit-ins or riots, and that was quite an accomplishment for the only integrated team in the southern United States."

"He was not only a great coach who produced great basketball teams, but he was also a humanitarian with great vision and passion for the game of basketball," says long-time Southern coach Ben Jobe, now a scout for the New York Knicks. "Like Martin Luther King and President Lyndon B. Johnson and other civil rights icons, he believed in liberty and justice for all."

"Coach Shipley was the one that broke the color barrier, and allowed all athletes an opportunity to attend any state institution," says Northwestern State head coach and former Louisiana Tech standout Mike McConathy. "That may have been his greatest feat."

Some didn't agree, especially those involved in state athletic administration and several members of the Lafayette campus administration. Most believe they were responsible, or at the least shared responsibility, for the NCAA's actions that closed down the program for two seasons from 1973-75.

"Coach Shipley was responsible for changing the system," says Don Landry, a former assistant for Shipley and later an ultra-successful coach and administrator on the collegiate level. "He fought the political system at that time and changed athletics in Louisiana for all time. That led to great success for the USL basketball teams, but Coach Shipley paid a tremendous price for it. Some people in high places in state government and even on the campus would never forgive him for bucking the system at the time."

"Beryl has been punished enough by what happened," adds long-time LSU coach Dale Brown. "It is time to forgive and forget."

Shipley never coached another game after the NCAA sanctions, but he also never left Lafayette and became a successful businessman - while maintaining his position as a basketball icon for over three decades even though his connection with the university he brought to basketball greatness was often strained.

Only in the last few years did steps toward reconciliation take place. A reunion of many former players and coaching colleagues broke the ice in 2001 and led to the founding of the Beryl Shipley Mended Hearts Scholarships, which helped families of students who struggled physically and financially due to heart problems. To date, 15 such awards have been provided to students in need.

Two other basketball reunions were subsequently held, the most recent in January. That night, although he was seriously ill earlier in the day, Shipley tried to attend the halftime ceremony, even getting to the Cajundome parking lot, before he had to return home and eventually be admitted to a hospital late that evening.

The next week, UL President Dr. E. Joseph Savoie went to Shipley's house to present him with a special memento as part of the first 100 years of UL basketball. The video of that presentation, as well as his video comments from that evening - and much more information on his life - are all available on UL's athletic alumni website www.athleticnetwork.net.

It's a great tribute, but the legion who knew him don't need the videos and pictures. They have their own memories.

"Anyone who knew him will always remember him," says Dr. Ed Dugas, a friend for decades and founder of the Athletic Network web site. "He was the genuine article. As an agent for change, he raised the bar for everyone including himself."