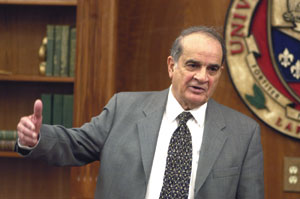 UL Lafayette may be inheriting environmental problems in its proposed controversial $3.25 million purchase of 4.1 acres on Girard Park Drive ' perhaps the highest price ever paid for residential property in that area.

The university plans to swap 36 of its 100-acre undeveloped Johnston Street horse farm for Lafayette attorney James Davidson III's Girard Park property, which it says appraised at $18.20 per square foot. Though zoned for single-family dwellings, the Davidson property that includes homes at 537 and 539 Girard Park Drive has housed a well-hidden industrial site for a plastics injection molding plant, ASH Industries, since at least the early '90s ("Horse Play," Oct. 19).

At a Nov. 22 meeting at the university's Alumni Center intended to allay concerns of residents living near the horse farm, UL official Wayne Denton said a Phase I environmental assessment had been conducted on the Davidson land as required by the University of Louisiana System. "We're OK [after] some things [are] removed from the property," Denton said. He did not give specifics on the materials in question. "There had been no spillage that could be determined," he noted. He also said the swimming pool, used as a cooling facility for the business, will be drained and cleaned before the university assumes the property.

Denton did not indicate that further testing would be conducted.

Resident Jacklyn Sonnier Hirshberg wants to know more. Hirshberg has lived on Girard Woods Road all of her life and was unaware until recently that this kind of business is operating in her neighborhood. Hirshberg said she's since contacted local, state and federal environmental officials. "Who knows what's in our air and our grass," she said. "I'd like to know what I've been breathing. If I had known there was a plastics factory going on out there, I would have stopped it."

When fighting property owner Davidson's attempt to rezone his property for commercial use in 1998, Hirshberg learned a business housed at the site was grandfathered into local zoning because it had operated for more than two years. "It was never brought out that it was a plastics factory," Hirshberg said.

Lafayette attorney Maureen Sullivan, who attended the meeting, agreed that the property needs further evaluation to protect the university. "Phase I is very cursory," she said. "If I were in business and I were buying that property, I would by no means rely on a Phase I, even though that's all the law requires."

In recent weeks, Hirshberg has been aggressively seeking to have the business shut down or relocated to a more appropriate commercial spot. She's getting no assistance from city zoning officials, who insist there is nothing they can do to stop the business ' despite the company's apparent expansion over the years, a clear violation of the state law that allowed it be grandfathered. As recently as April 2005, a permit equivalent to the electrical power needed to run a small restaurant was issued for the 539 address; there also is no record of a building permit ever being issued for the large metal building that houses some of the business. "We just can't figure out when it got there," said Eleanor Bouy, director of local government's department of Planning, Zoning & Codes. Still, Bouy plans to take no action against ASH Industries, which is owned by Davidson's son-in-law.

The university is seeking to have the Zoning Commission reclassify the first 36 acres of the horse farm from residential to commercial on Dec. 5, which must also be approved by the City-Parish Council. In the meantime, UL claims the property is being reappraised to reflect its potential commercial value to BRE-ARD LLC, which is buying the Davidson land and swapping it for the horse farm acreage. In the initial appraisal, only the first six acres were given the benefit of commercial use and were valued at $6 per square foot; the 24 just beyond the coulee at $1.30/psf and the last six at $1.03/psf. BRE-ARD's owners, Dan Menard and Jerry Brents, will return six acres to the university after the deal, and the back 70 acres will be retained by UL for future upscale residential development.

Because commercial land typically sells higher than residential, UL President Ray Authement admits the deal may have to be renegotiated.

The Board of Supervisors for the UL System approved the land swap on Aug. 26. A board spokesman did not respond by press time about whether any change in the structure of the transaction would require the board's approval.

In the meeting, Authement insisted he desperately needs the Davidson property for faculty housing and eventually a president's home. He also raised the ire of residents by continually emphasizing the legality of the transaction. "This is as good and legal a deal as we can come up with," he said.

Resident Laurel Lee Domingue, who said her late husband Pat was a big financial supporter of the university, asked Authement why he wanted homes that are more than 50 years old and in need of repair. "I know your intentions are admirable," she said shortly before leaving the meeting in frustration. "But I don't know why you are so hung up on those Davidson houses."