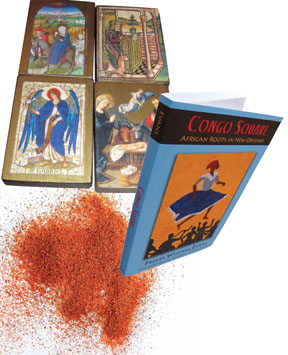 OUR MUSICAL MECCA
If you like American music, make a pilgrimage to its birthplace, Congo Square in New Orleans. Jazz can trace its roots there. So can blues, R 'n' B and hip-hop. The 1-4-5 chord progression of country and rock 'n' roll owes a debt, too.

OUR MUSICAL MECCA
If you like American music, make a pilgrimage to its birthplace, Congo Square in New Orleans. Jazz can trace its roots there. So can blues, R 'n' B and hip-hop. The 1-4-5 chord progression of country and rock 'n' roll owes a debt, too. Even the twangy banjo is the progeny of African instruments strummed and plucked in this cultural hotbed across Rampart Street from the French Quarter where, on Sundays, slaves and free people of color gathered to shake off their troubles and celebrate the musical and dance rhythms, the pagan religions, languages and market economy of their African ancestry. This is where it began, and author Freddi Evans' Congo Square - African Roots in New Orleans ($20, softcover, UL Press) is the go-to source on the history and import of these few sacred acres, tracing the square's development from pre-colonial times through the antebellum era and into the 20th century. The customs of the Mardi Gras Indians have their genesis in Congo Square, as does the second line. And fortunately the city of New Orleans has long been acutely sensitive to its cultural underpinnings and preserved this cultural landmark. Evans is an alumna of Tougaloo College in Mississippi and studied in Ghana, and her knack for telling an engaging story is on par with her exquisite scholarship. - Walter Pierce

HOW ICONIC
Religion is big in decor this year, and these iconic tiles are sure to be inspirational. Handmade by Jane Cooke of Shreveport, the wooden plaques topped with angelic icons come in several sizes ranging from matchbox to wall-mountable. The tiles are just a sampling of the religious art, jewelry and furnishings offered at the newly opened Eclectic Design and Interiors in the Oil Center. Locally owned by Tamara and Michael Miles, who previously operated Pavé in Jefferson Street Market, the shop carries affordably priced European antiques, accessories and works from local artists including Hope Hebert, Julie Breaux and Bonnie Camos. Eclectic also showcases the Feed Asher jewelry line featuring unique necklaces and bracelets accented with tiny religious medallions and crosses designed by the Miles' daughter Misty Corbell. Opened on April 6, Eclectic is located at 1116 Coolidge Blvd. in the Oil Gardens Shopping Center occupying the former garden center Atelier. Coming soon is a green house that will be merchandised by Atelier's Susan Voitier. - Lisa Hanchey

WE CAN HELP
JustAPinch.com, a recipe-sharing website, came to our attention via a press release touting the gastronomic contributions by Acadiana residents. That piqued our interest. The site contains thousands of recipes from contributors all over the country, free for the download and a whirl in the kitchen, including dozens of recipes bearing the beloved adjective "Cajun," although few have a Louisiana provenance. Nonetheless, you can find recipes for making a roux (in the microwave) as well as red beans & rice that are true to our food culture. There's even a chicken & sausage gumbo recipe complete with a made-in-the-pot roux that is dead on. But the ubiquitous ingredient in these Cajun dishes is simply - drum roll please - "Cajun seasoning." Yes, kids, that is the essence of our fine cuisine: Just sprinkle some Tony's or Slap Ya Mama on it and, voila!, you have yourself an authentic Cajun dish. Extra points if you eat said Cajun dish under the shade of a moss-festooned live oak tree while wearing overalls. And after every delicious bite, yell, "Aiyeeee!" That's where we come in. There are several discussion boards about Cajun cooking at JustAPinch.com. Log on, jump in and dispel some misconceptions. - WP