Should the state be allowed to scoop up land for only fair market value, even if it's for hurricane protection? You may have to decide. 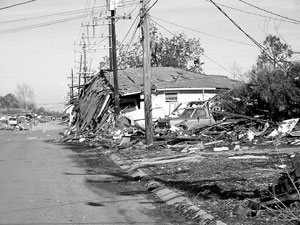 The governor and other state officials are locked away inside a House committee room, discussing what could become Louisiana's first comprehensive coastal protection plan. Outside in the hallway, where the real wheeling and dealing often takes place, a state senator is barking orders at an aide.

Sen. Reggie Dupre leans in close, waving his finger over the aide's notebook: "Tell them we want a constitutional amendment on the ballot that would allow the state to take private land for hurricane protection projects, and we pay only fair market value for it."

It's a bold suggestion, something that hasn't been mentioned in the numerous press conferences about consolidating the state's levee boards, next month's special session or even hurricane recovery. But the issue is not foreign to those in the trade.

Back in the committee room, Steve Wilson, president of the Pontchartrain Levee District, sits quietly listening to a PowerPoint presentation with his fingers locked behind his head. Although he's not directly involved with the planning process going on in the hallway, he understands why the concept is being floated.

A few years ago, his district was building a hurricane levee through the wetlands of St. Charles Parish. Everything was moving along as planned until a right-of-way was encountered. In order to proceed, the levee district paid Airline Lands, which is owned by the Monteleone family of New Orleans, the fair market value of $66,000.

But the Monteleone family had obviously read the Louisiana Constitution following the buyout ' it contains what might be the most liberal definition for land values in the nation. As such, the family took the levee district to court, arguing the land could have been commercially developed in the future. In the end, they won a whopping $7.2 million judgment, based on the potential value of the land, rather than its fair market value.

Referred to as "full extent of loss," such an argument is allowed under the state's charter, and some officials fear the legal language could hold up hurricane protection projects for years. This is even more important today, as Louisiana stands on the cusp of rebuilding. "If this keeps happening, then a lot of projects won't even be affordable enough to build," Wilson says.

That's why Dupre, a Terrebonne Parish Democrat, is leading the charge to change the constitution to allow the state to take private land for hurricane protection projects and pay the owner only fair market value and nothing else, "even if they think they can build three malls on the land in the future," he says.

With 61 percent of Louisiana voters in favor, a similar constitutional amendment was adopted in 2003. The provision, which is still in practice today, permits the state to pay only fair market value for land it seizes or damages in connection with a costal restoration project.

The 1991 Caernarvon Freshwater Diversion Project that devastated several acres of oyster leases in Breton Sound largely prompted the amendment. The resulting $2 billion legal judgment made national headlines before it was thrown out by the Louisiana Supreme Court.

Even though they were paying the state only $2 per acre for their oyster leases, fishermen were able to convince a state district judge the leases would have paid out substantially more over the coming years if they had not been damaged.

The 2003 amendment sailed through the Legislature with very few hiccups, especially since it limited the geographic area where the seizures could take place. But it also received stiff criticism from those opposed to its quasi-retroactive language, meaning it could be applied to future as well as pending suits.

Dupre, who has been involved with most of the constitutional amendments related to natural protections over the past five years, says he would base his new proposal on the 2003 model ' only this time, it would apply to hurricane protection projects, such as levees, seawalls and floodgates.

In short, the proposal could translate into fewer dollars than ever for landowners standing in the way of hurricane protection projects. But in practice, the measure would merely alter the way courts are allowed to interpret the value of such land.

Newman Trowbridge Jr., a Lafayette-based attorney and general counsel to the Louisiana Landowners Association, a group that mostly represents marsh, timber and agricultural interests, says a change like this would force private landowners to shoulder the cost of a public project.

But more important, he says the proposed amendment would rob many people of their livelihoods and futures.

"This is a major concern," Trowbridge says of the proposal, which is still in its conceptual stage. "Hurricane protection levees are often placed in areas that are economically developable. In a lot of instances, this is very valuable land that could be income-producing for the owner."

Dupre admits it will be a hard sell, but he does have an increasing wave of public sympathy on his side, as hurricane protection has become a major policy issue. A petition was filed to recall the governor for the way she responded to Hurricane Katrina, and several public demonstrations have been held supporting Category 5 levee systems and the consolidation of levee districts.

Still, the public outcry regarding the coming land seizures has been minimal.

"This is the issue that isn't being talked about," Dupre says, adding the tide will soon turn.

Residents of south Louisiana have known for months that the taking of land will be necessary for rebuilding to progress, but only recently have there been signs of such a trend. Indeed, private property rights are shaping up as one of the most explosive issues in post-Katrina Louisiana.

Some private land ' no one knows how much ' undoubtedly will need to be taken by the government for any long-term plan to proceed.

A recent report issued by the Crescent City Redevelopment Corporation, which was created by New Orleans Mayor Ray Nagin, estimates it will cost nearly $17 billion to rebuild the city, of which $12 billion will be dedicated to buyouts.

A "last resort" measure in the report calls for the corporation to use eminent domain to seize some property. Eminent domain is the legal doctrine that allows governments to take private property for certain public uses that are supposed to serve the greater public good. According to a recent Supreme Court decision, those uses can include economic development that ultimately will yield higher property taxes.

On the congressional level, many are waiting to see if a buyout bill by U.S. Rep. Richard Baker, a Baton Rouge Republican, will be resurrected in coming months. Baker's bill, which was stalled late last year, would pay homeowners no less than 60 percent of the equity they have in their homes and force mortgage holders to settle for 60 percent of that balance. If such a measure passes, it would become a major player in future buyout plans for Louisiana.

The U.S. Army Corps of Engineers has also gotten into the mix. It announced last year that it wants to obtain huge swaths of land ' some pieces spanning more than 150 feet ' along the 17th Street and London Avenue canals for levee improvements. In Plaquemines Parish, the feds are considering seizing portions of land from 250 property owners to widen the Mississippi River.

Such takings are not supposed to be an easy grab for the feds. Initial reports suggest ' and the Fifth Amendment to the U.S. Constitution requires ' that property owners be compensated justly. Some parish officials are going public with their fears and expressing concern that purchase prices could drop below pre-Katrina fair market value.

As for the proposed constitutional amendment, it's flying below the radar for now as state officials circle their wagons and prepare for policy battle. Everyone involved agrees it will be a challenge, but it may also be the only way to carry on with significant hurricane protection projects in the future.

"This is an unspoken issue that nobody wants to deal with," Dupre says.