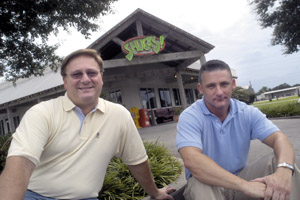 The quaint town of Abbeville, 30 minutes south of Lafayette, has been a raw oyster destination since 1869, when Joseph Dupuy first traveled to Diamond Reef to harvest oysters to sell at his Vermilion riverside shop. More than a century later, two out of the three oyster houses of Abbeville ' Dupuy's and Black's ' have stayed remarkably consistent in the quality of their raw oysters, even while undergoing traumatic transitions in ownership. Now it's Shucks!' turn to navigate the waters of new ownership.

When Jack and Diane Phares and partner Linda Hebert sold Shucks! almost two weeks ago to the tune of $1.2 million, longtime customers and employees were skeptical. Front supervisor and 26-year employee René Hunt was afraid everything about the restaurant would change. "Usually [with] new owners it's their way and they will do what they want to do," the veteran waitress says. While Shucks! is only 12 years old, the Phareses, along with much of their staff, have been in the oyster business for decades.

They got their start at Dupuy's Oyster Shop, where Jack Phares caught the fever for the restaurant business. His love for the seafood enterprise started in the 1960s working oyster beds with his father-in-law, who at the time owned Dupuy's.

Jack Phares' in-laws, Harold and Doris Hebert, taught him the ins and outs of the cooking world and also passed on their passion for the business to their daughters, Diane and Linda. When the Heberts retired in 1979, Phares and the two daughters bought Dupuy's and ran it for about 15 years. In 1994, after an acrimonious lease dispute with the Dupuy family property owners, they lost the lease.

The Phareses and Linda resolved to come back bigger and better with a new venture. Within a week of losing Dupuy's, Shucks! was being built just up the road. In less than a year, the new restaurant opened its doors. Loyal employees who had worked with the Phareses left Dupuy's and followed them to Shucks!

Jack Phares clearly remembers Oct. 2, 1995, the day Shucks opened its doors. He was 47 and had the stress of a large mortgage and a brand new business. His fears were unfounded; the Abbeville restaurant has been a regular stop for faithful customers and a second home for the kitchen and wait staff for more than a decade now. Longtime employees are as much a part of the draw as recipes created more than 30 years ago ' ones customers have come to expect and look forward to every time they dine. When news of the sale spread, anxious customers responded with near anger. "They better not change the food," was a phrase employee Hunt heard over and over.

Hunt felt a weight lift off her shoulders on the day new owners David Bertrand and Bert Istre introduced themselves to the crew. "They said to us," Hunt recalls, "'You are going to teach us. We're going to learn from you.'"

Bertrand and Istre both have experience in operating restaurants. Bertrand and his wife, Susie, opened The RiverFront restaurant, which sits along Bayou Vermilion in Abbeville and is less than a block away from Shucks! The Bertrands ran The RiverFront from 1989 to 1995, and after six years sold the business to spend time with their young children. Istre graduated from UL Lafayette's hotel and restaurant management school in 1993, spending his internship year getting hands-on experience under Bertrand at the RiverFront. He went on to manage Abbeville's Golden Corral, which he purchased in 1996. The two men have been friends since their days at The RiverFront.

On Friday, Aug. 11, the sale of Shucks! to Bertrand and Istre was finalized, and the new owners took over the following day. "My number one concern is not to come in and try to reinvent the wheel," Bertrand says. "If I try to change that gumbo, I think there would be a mutiny." He immediately noticed the teamwork of the staff and realized he had bought into a unique situation. "Everybody is just like a well-oiled machine," he says.

"[They] promised to take care of the staff and that was important to me," says Linda.

After 34 years in the restaurant business ' practically a round-the-clock commitment ' Phares characterizes the sale as a business decision and says he will help his son Chad and wife Maria at their Lafayette oyster restaurant, Phares'. "If he's shorthanded," Jack says, "I'll pitch in and help."