Hamilton's closes, Mall of Acadiana has a buyer, Caillier pleads not guilty and more. 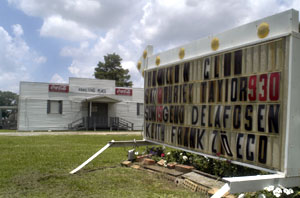 After nearly 50 years in business, Hamilton's Place hosted its last dance on Sunday night. Hundreds of dancers packed into the dance hall and spilled out onto the porch and the parking lot to dance to the music of Geno Delafose & French Rockin' Boogie, along with Keith Frank and the Soileau Zydeco Band. William Hamilton's father opened the nightclub ' sometimes called the Hamilton Club ' on Verot School Road in 1956.

Hamilton says it's become increasingly difficult to make a living with the dance hall, citing dwindling crowds and increasing expenses. In January, due to rising insurance premiums, the club stopped serving alcohol. Hamilton wants to sell the club, but says the owner would have to move the building off of the Hamilton family's property. ' RRF

MALL OF ACADIANA HAS BUYER

Mum was still the word at press time Monday afternoon from officials at the Mall of Acadiana, but a source close to the mall confirms that a deal is on the table to sell the 26-year-old shopping center to CBL & Associates Properties of Chattanooga, Tenn.

Katie Knight, director of investor relations for CBL, a real estate investment trust, also would not release any information on the pending sale. CBL is a REIT listed on the New York Stock Exchange. The company primarily owns regional malls like the Mall of Acadiana that are the dominant retail facility in middle market areas.

The 1.1 million-square-foot Mall of Acadiana is owned by Robert B. Aikens & Associates of Troy, Mich. Lafayette developer Dwight Andrus Jr. began working on the mall project seven years before the mall opened, securing the land and commitment from anchor tenant Sears. "Realizing I was small compared to the enormity of that business, what I did was seek a partner," Andrus says. "I knew I needed help." Andrus sold his interest to Aikens in the late 1990s. ' LT

Larry Caillier's arraignment last Friday could mark the beginning of a long line of court dates for the veteran Opelousas Police Chief. On Wednesday, June 22, a St. Landry Parish grand jury was set to reconvene to consider more state charges against Caillier. The grand jury will likely be considering evidence from a state auditor's report issued in January that identified more than $200,000 of funds and equipment that went unaccounted for in the department from 2000 to 2003. In May, the grand jury indicted former Opelousas Police Maj. Ronnie Trahan on 17 counts stemming from the audit report including criminal conspiracy, payroll fraud and money laundering. Last Friday, Caillier's attorney, Elbert Guillory, entered Caillier's written plea of not guilty for five state charges of malfeasance. The charges allege that Caillier ordered his officers not to respond to calls about fights breaking out at a Battle of the Bands event that sheriff's deputies were supplying security for. A pretrial trial hearing for that case is set for Sept. 29. ' NS

A preliminary ruling in the lawsuit filed by Iberia Parish Government against Mosquito Control Contractors Inc. has reduced the contract length between the parish and MCCI from five years to three ("Foggy Contract Breakdown," June 1). Based on a request by Assistant District Attorney Wayne Landry for summary judgment, the court found that the contract for 2003 through 2008 was in violation of the parish's home rule charter, which only allows a three-year term. The contract for mosquito spraying is now scheduled to end on April 30, 2006, unless MCCI appeals. Meanwhile, the trial, based on issues of overfilling and CPI misapplication, which was scheduled to begin on June 7, has been continued until Aug. 10. ' MT