Frigg-A-Go-Go takes the stage for the first time in two years ' but don't call it a reunion. 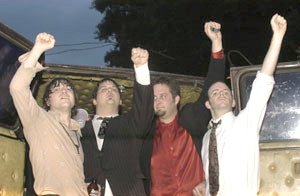 It's been two years since Frigg-A-Go-Go played its last sold-out show to a crowd packed like sweaty sardines on the porch of the Blue Moon Saloon. Since its formation in 1994, the band that practiced in a rented storage facility in Carencro garnered a fervent following of young and old alike. The fearless foursome picked up the torch of a smoldering local rock scene, reignited it and shouldered it for a decade before throwing in the towel.

"Everybody was ready to focus on different things in life finally," says Frigg organist Christian Miller (aka Sir Christian Leo). "We were all ready to focus on more lucrative careers, something that actually paid." At the time, Miller intended to move to Alaska to work on a cruise ship, but reconsidered and moved to Ville Plate where he joined the family business making Jack Miller's Bar-B-Que Sauce.

Drummer Chadwick Dupré (aka Captain Chadwick) moved to San Francisco, where he works as a nurse, but he jokingly says he moved for one specific reason: "So I could watch VH-1 Classic all f--kin' day long." Vocalist and guitarist Ronnie Chauvin (aka Ronnie Ramada) moved to New Orleans where he manages an antiques shop. And bassist Jeremy Steward says, "I personally went on to the corporate world and started my journey down the road of fatherhood." He also notes that unlike his band mates, he doesn't have an alias. "The others don't really care for it," he says, "but I think [Jeremy Steward] is the most creative stage name in rock history."

There was one innocent bystander left in the band's smoldering ashes ' an unfinished album. "Most of it was recorded around the time we kind of disbanded," Miller says. "We did a lot of it at Ivan [Klisanin]'s studio. We laid down all the tracks, started doing some of the mixing, and that's when we decided to go our separate ways. So we just put it on the shelf, but Ronnie kept fine tuning it and mixing it."

Now more than two years in the making, All That Glitters, the band's third full-length album, debuts this week at a CD-release party at Renaissance. And with the return of Dupré from California for Festival International festivities, Frigg-A-Go-Go will again return to the stage.

"Please don't call this a reunion," Miller says. There are no plans for any other Frigg shows beyond Friday night, but the bandmates aren't closing the door on future performances. "We have no intentions, one way or another," Miller says. "As of right now, it's just this show, and we'll see what happens after that."

On All That Glitters, saxophonist Dickie Landry is featured prominently on the track "Dickie Control." At a Frigg-A-Go-Go show, Landry was a familiar sight, often jumping on stage with the band to play his horn. "They were the best rock 'n' roll and punk band around," he says. "For me it was like jumping into an empty elevator shaft playing with them. They were the most exciting band around. They lasted 10 years, and not too many groups last that long."

From the opening notes of All That Glitters ' the bouncing organ licks, the screeching guitar solo, the driving bass and the relentlessly pounding drums of "Muscle" ' Frigg-A-Go-Go bellows like an insane tour guide on a white-knuckle ride.

But it's not all about rocking all day and partying all night. In "The Stranger," Ramada sings of the conflicting emotions of being a Cajun while feeling disconnected from his heritage. "Well I stand a stranger, before my people," he sings. "Don't know the language of my father, of my father or of my uncles. I am a stranger before my own family." Before the song's end, he comes to grips with his place in the culture. He sings: "We will not forsake you. We're coming full circle. We are the future. We are your future."

The shuffle of "Full-Grown Boogie" nods, in part, to Muddy Water's "Mannish Boy," while "The Taking" sounds like a twisted version of The Go-Go's "We Got the Beat." But no matter where the band derives its inspirations, the end result is undeniably Frigg-A-Go-Go's own sound. On "Fishing (on the Mekong Delta)," which is more relaxed and sweeter than your standard Frigg fare, the band proves that it's capable of more than just brazen rocking.

The downside of All That Glitters is that it makes you long for the days when you could catch Frigg live, on any given night of the week in Lafayette. Those days, for the foreseeable future, are gone. But for now, they've left us with an enduring album that tells the tale of a band with the courage to do it their way and call it quits while the getting was still good.