How Gov. Bobby Jindal is faring in his efforts to navigate the legislative session. By Jeremy Alford

Gov. Bobby Jindal's package of bills this legislative session is 11 pages long. As in prior years, many lawmakers with bills in the gubernatorial package describe a process by which the administration makes vague statements about what should be filed -- if a request is made at all - leaving Jindal's bill sponsors with little guidance. 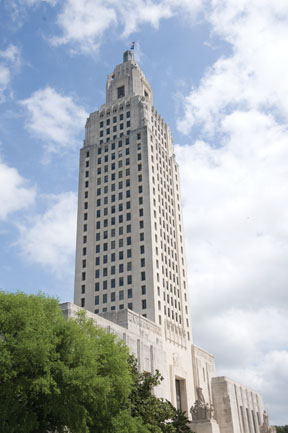 How Gov. Bobby Jindal is faring in his efforts to navigate the legislative session. By Jeremy Alford
Photo by Robin May

Gov. Bobby Jindal's package of bills this legislative session is 11 pages long. As in prior years, many lawmakers with bills in the gubernatorial package describe a process by which the administration makes vague statements about what should be filed -- if a request is made at all - leaving Jindal's bill sponsors with little guidance.

From there, administration wonks add details to favored bills as discreetly as possible - in the fashion, some say, of the president's relationship with Congress. Just like the commander-in-chief (and, in fairness, other governors before him), Jindal relies on Chief of Staff Timmy Teepell to do the heavy lifting and arm twisting.

State Rep. Walter Leger III, D-New Orleans, has three bills in Jindal's official package: two that deal with tax credits for historic buildings and another that stiffens laws against human trafficking. "The human trafficking bill [is one] the administration asked me to handle," Leger says. "The historic building credits are bills I filed and they later included in the package. In fact, they just informed me that they were being included in the package. They didn't really ask my permission."

While Jindal is picky about where government gets its revenues, he is less choosy about donors from whom he accepts campaign cash. It's another example of the D.C. political philosophy that has become a hallmark of his brand.

Jindal took a great deal of flack for attending a fundraiser hosted in March by Mike Worley of Hammond. Worley is the CEO of Worley Catastrophe Response, the company tapped by BP to process claims related to last year's oil spill. Worley Catastrophe also has a $380,000 consulting agreement with the Division of Administration, which makes it a state contractor.

According to Jindal's most recent campaign finance report, which covers the first quarter of this year, Jindal not only attended the controversial fundraiser, but he also accepted $15,000 on March 29 from Worley. The state has a $5,000 limit on contributions, so Worley wrote one personal check and two others from business accounts.

That, too, is a hallmark of Jindal's "ethics reform" brand.

On the policy side, Jindal is pursuing a proposed a merger between UNO and SUNO as well as the privatization of three state prisons and the Office of Group Benefits. Jindal's sales pitch is simple - and blunt.

Jeffrey D. Sadow, an associate professor of political science at LSU-Shreveport and Jindal booster via his blog, observes: "To date, Jindal's only real strategy to back these ideas is that if not made into reality, more budget cuts loom on the horizon. That may cut it as a practical explanation, but scaring people doesn't persuade them, and enough may not be scared enough to give him the necessary majorities to get these things passed."

Elsewhere, expect Jindal to cater to his Christian conservative base and to the Tea Party movement by backing bills dear to those groups.

For example, the governor promises to sign a so-called "birther" bill (HB 561) by Rep. Alan Seabaugh, R-Shreveport, who wants to force presidential contenders to provide their birth certificates to run in Louisiana. Obama released his long-firm birth certificate last week, but the issue refuses to die for some folks.

Conservatives will also have to play defense. Senate Bill 70 by Sen. Karen Carter Peterson, D-New Orleans, would repeal the Louisiana Science Education Act. Critics say the law allows creationism to be taught in public schools. Forty-one Nobel Laureates have sent a letter to Jindal, who majored in biology, urging him to back Peterson's bill and to consider that "biological evolution is foundational in many fields, including biomedical research and agriculture."

The biggest fight of the eight-week session remains the budget. Lawmakers must decide whether to rubber-stamp Jindal's $25 billion spending plan or rewrite it to their own liking. With a $1.6 billion revenue shortage anticipated, neither option is appealing. No matter what the budgetary outcome, there will be plenty of blame to go around by election time, which starts right after the session ends on June 23.

The blame game, too, is central to Jindal's modus operandi - and it's liable to be equally dangerous to GOP allies as well as Democratic foes.