Nursed to health by UMC and her adoptive parents two years ago, preemie Jennifer Marie Fero is this year's March of Dimes ambassador. By Lisa Hanchey

Edwina and Christopher Jude Fero prayed for a miracle. Together since 1994, Jude desperately wanted to become a father. Edwina, or "Eddie," as most know her, already had two grown children from a previous marriage, as well as a grandchild. But, she and Jude wanted a child together. As both were approaching 50, they thought that adoption was the most viable option. 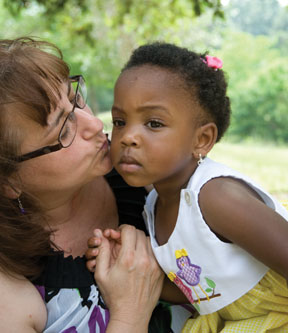 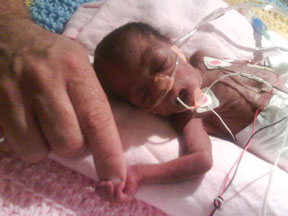 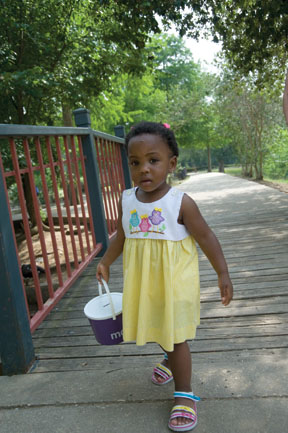 From top: Mom Eddie and Jennifer take a break from playing at
Girard Park; baby Jennifer, born premature to a homeless
young mother; the 27-month-old is on a mission to feed the ducks.

Nursed to health by UMC and her adoptive parents two years ago, preemie Jennifer Marie Fero is this year's March of Dimes ambassador. By Lisa Hanchey

Edwina and Christopher Jude Fero prayed for a miracle. Together since 1994, Jude desperately wanted to become a father. Edwina, or "Eddie," as most know her, already had two grown children from a previous marriage, as well as a grandchild. But, she and Jude wanted a child together. As both were approaching 50, they thought that adoption was the most viable option.

When the couple married in 2002, Eddie worked as a traveling nurse, spending most of her time in New Orleans. Over Thanksgiving dinner two years ago, Jude prayed that Eddie would come back to Lafayette and start a family. When her contract ended, she took a position as a neonatal nurse at University Medical Center. The couple started taking weekly classes for foster and adoptive parents, with the goal of adopting an older child.

Then, right before their last scheduled class, a blessing came into their lives from a most unexpected source.

On Saturday, Jan. 24, 2009, an ambulance arrived at UMC with a young mother who had just delivered a premature baby weighing less than 2 pounds. When Eddie came down to the emergency room to assist, the physician on duty was administering compressions to the infant, desperately trying to keep her alive. The baby, born 14 to 15 weeks early and weighing 1 pound 13 ounces, was then placed on life support. A neonatal specialist, Dr. Sarita Sharma gave her lung surfactant, a drug endorsed by the March of Dimes that opens up the lungs of premature babies. Her chances of survival were slim to none.

That afternoon, the baby's 23-year-old African American birth mother came into the nursery. Eddie told her about the infant's condition, noticing that the woman never asked for or looked at the baby. After Eddie filled her in on the details, the young mom broke down and cried. Despondent, she explained that she already had an 8-month-old and a 23-month-old that she was struggling to support. She and her babies were temporarily living at Faith House, a shelter for battered women. She had no other family in the area, and was homeless, unemployed and desperate.

She asked Eddie what her options were. Eddie told her about foster care, then asked if she had any relatives or friends who might be willing to take the baby. The young woman shook her head. Then, she asked if Eddie knew anyone. Eddie explained that she and her husband had been taking parenting classes to adopt an older child.

When Eddie went to work the next morning, a social worker approached her, saying that the young mother wanted Eddie and her husband to adopt her baby. Overwhelmed, Eddie tried to call Jude but was unable to reach him. A couple of hours later, he finally called her back, explaining that he had been praying in church. Eddie asked what he had been praying for, to which he replied, "A child to share our love with." She told him to come to the hospital immediately.

Jude rushed to the NICU unit but was unable to get close to the baby because of hospital protocol. When he caught a glimpse of her from several yards away, he started sobbing uncontrollably. He then left, without saying a word about the baby.

The next morning, Eddie returned to work, anxious to see the baby. But, at 6 a.m., the baby coded. After all available medical options had been exhausted, Sharma tried to console Eddie. "God has worked everything through me that I'm here to do," the doctor said. "She's in God's hands."

Eddie stayed at the baby's beside and prayed. Later, Eddie and Jude discussed their options. He said, "Don't you see? God has answered our prayers."

Doctors had warned that if the baby survived, she might be blind, brain damaged, or have cerebral palsy. Undeterred, Eddie and Jude decided they would keep the baby no matter the outcome. Eddie returned to the hospital the next day, where she met with a social worker about adopting the baby. Against medical advice, the mother was checking out of the hospital to get back to her other children. Time was of the essence.

In the midst of this chaos, Jude called to tell Eddie that his father had died.

Fortunately, the baby's mother remained at the hospital until the next day to sign the adoption papers, and Jude, a middle school teacher, took off of work to complete the process. Within the next 24 hours, the infant coded two more times. The baby remained on a ventilator while the couple left town for the funeral. When they returned, the child, whom the couple named Jennifer Marie, was still hanging on.

As Jennifer struggled to stay alive, Jude came to the hospital every day after work. He bonded with the baby "kangaroo style" (skin-to-skin) - cooing, talking, singing and reading stories to her. He missed only two days because he was sick with a virus. During that time, Eddie and the hospital staff told him, the baby cried inconsolably - presumably waiting for her daddy.

After four months, Jennifer - by then weighing 5 pounds 8 ounces - finally came home. Jude quit his job to stay with her for the first year; then it was Eddie's turn. At first, Jennifer was developmentally delayed, missing all normal milestones. But after a team of physical and occupational therapists worked tirelessly with her for a year, she was making - and surpassing - all of the targets for her age group.

Now 27 months old, Jennifer is the picture of health; she has no deficiencies whatsoever. She is a bundle of energy, loves to dance and is taking Spanish lessons. You would not believe this 2-year-old's vocabulary.

"Once she came into our lives," says Jude, "everything changed. I don't look at anything the same anymore. Everything's all new again."

Jennifer is serving as this year's ambassador for the March of Dimes' March for Babies, May 14, 2011, in River Ranch/Town Square. Registration for the three-mile walk begins at 8 a.m., with start time at 9 a.m. To register for the walk, call (337) 233-8476 or visit the website at www.marchforbabies.org.