For some international musicians, five days of festival foster a lifetime connection with Lafayette. By Heather Miller & Anna Purdy

Locals lining the streets and stages of downtown for Festival International de Louisiane year after year need no recap, no stories, no explanation of what FIL means to our city. We map our music schedules in March, save couch space for out-of-town festival fans - and generally take on each day with a notion that unexpected, unforgettable happenings will unravel as we march aside the mass of familiar and unfamiliar faces.

**For some international musicians, five days of festival foster a lifetime connection with Lafayette. By Heather Miller
** 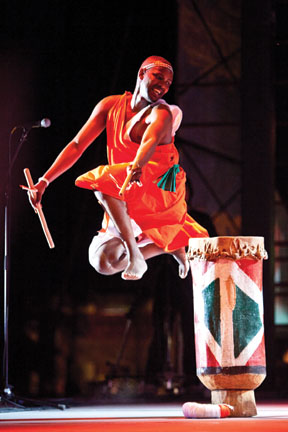 Locals lining the streets and stages of downtown for Festival International de Louisiane year after year need no recap, no stories, no explanation of what FIL means to our city. We map our music schedules in March, save couch space for out-of-town festival fans - and generally take on each day with a notion that unexpected, unforgettable happenings will unravel as we march aside the mass of familiar and unfamiliar faces.

And as we watch with mixed emotion as downtown returns to post-festival normalcy and fondly look back on one of the biggest and best in its 25-year history, it has to make one wonder: What is FIL for the thousands of non locals who travel to Lafayette every year to play on or offer technical support for festival's six main stages? Do our visitors feel as impassioned as we do when they hit the stage and subsequently take in as much culture as we have to offer in five days? Do they leave here with the same bittersweet thoughts we have, bitter because it has to end, yet sweet on the memories that were made?

Jean Claude Savard of Québec is one of those visitors in mind. A sound engineer for Suroit, a Montreal-based band that rocked four stages this year, his English is emphatically adept for carrying on a conversation - even amid the collision of sounds that erupt when downtown is enveloped by all things FIL. But if your Cajun dialect is a bit too accelerated for Jean Claude to immediately grasp, no worries. He'll respond with a smile and laugh that would make Sanford and Son's Aunt Esther inclined to sip some gin and join the party.

Jean Claude arrived in Lafayette as a first-timer to the city and its iconic festival. After five solid days of experiencing this town, it won't be his last. He, along with dozens of other international musicians, wasted no time in seeing, swaying, smelling and sipping every scene unfolding at his fingertips. He made new friends at every stage, on every street, and at every after-festival music show. He found his way to house parties near downtown to see "real life, real people." And on the last night of festival, while dancing to The Duhks at Blue Moon's Festival Appreciation Party, Jean Claude reminded his new acquaintances that he would not leave town without "hugging" the St. John Oak Tree. 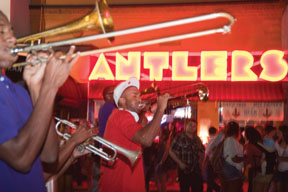 His love story with FIL and Lafayette is not uncommon among the countless visitors who get it, but it's symbolic of how this festival, in its 25th year, continues to put Lafayette on the map in a way that no other event can. Five days of festival fostered a lifetime connection with Lafayette for Jean Claude and so many others who play an integral role in the festival's main artery - the music.

And if one's love for Festival International was defined by how many times he or she took the stage to entertain the masses, then the Duhks' Sarah Dugas might take the gold medal. Dugas took the stage a whopping five times in four days, four with her bandmates and once for The Louisiana Experience, festival's closing act that comprised Chad Viator, Marc and Ted Broussard, Michael Doucet, Johnnie Allen, Belton Richard, Lil' Buck Sinegal, Sonny Landreth and more. If her energy were waning as much as the locals by her second performance at Blue Moon on Day 5, it sure didn't show. The Duhks have a long history with festival, and we can only hope there is more to that story in future years. 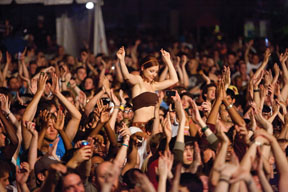 Here's to the music that brings the French-speaking world to our front yard, the year-round staff that somehow manages to find a way to top the year before - and the endless list of people, agencies and factors that come together to make this happen. Same time, same place next year? Count me in for another 25 years.

March Fourth Marching Band
Consistently a crowd pleaser. This was the band's fourth year at our festival. A few years ago I had the pleasure of volunteering for Festival International's hospitality tent for the first time. A friend of mine told a few members of March Fourth how sorry she was to miss them as she had to be working the tent. So they rounded up a few others members and did a show just for her, in the tent, right there. So even if March Fourth didn't look and act like the kids from Lord of the Flies grew up, got off the island, raided Sergeant Pepper's costume trunk and worked the door at a gay club and joined a drumline I'd still love them. Riotous without malice and raucous without danger, the band emphasizes beats and horns while handsome men and women swagger on stilts, on stage and through the crowd, taking extra time to wave at and high-five any children they see. Seeing them twice in one festival is hardly enough. 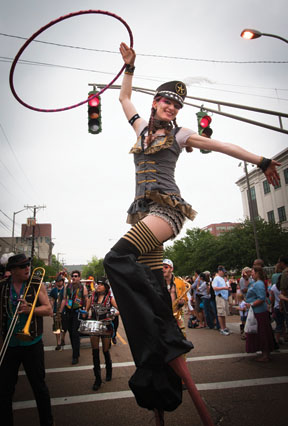 After Festival After Parties
Every night after Festival International winds down the venues open their doors to crowds longing for A/C, seating, and maybe to hold something that doesn't come in plastic or in a can. Having the first weekend of New Orleans' Jazz Fest is both a boon and a burden - the latter because we cannot teleport between the two cities' shows and the former because some of the Jazz Fest performers spill our direction. Keb' Mo' opened for us Thursday night then returned to New Orleans, for example. Folks like Big Sam's Funky Nation came to Artmosphere the Wednesday night. Bas Clas came to The Wild Salmon on Friday night after playing for Tuesday's Rhythm and Roots. Saturday saw the annual reunion of MattRock & the Powerboxx at Caffé Cottage and The New Orleans' Bingo! Show at Grant Street. It's nearly impossible to budget both time and money to see all these great shows, but it's certainly a consideration. - Anna Purdy