Horace Trahan & the Ossun Express bust out with an Allison Bohl directed video for "Same Knife Cut the Sheep Cut the Goat."

Bang! Cut and print it. Lafayette's moving on upto the big leagues (at the top). Add Horace Trahan's name to the list of Acadiana musicians who have shelled out some hard earned chicken scratch (cash) from their pockets to pay for the production of a "real" music video. Yep, real as in someone who actually knows how to use a video camera and edit the footage into something that resembles a professional quality music video as seen on channels like VH-1, MTV (when they actually play videos) and YouTube. 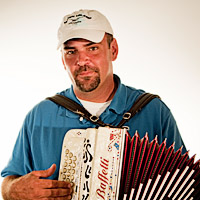 Dig it. Horace Trahan & the Ossun Express have teamed up with Lafayette's video director de jour Allison Bohl for a high-quality video of Trahan's song "Same Knife Cut The Sheep Cut The Goat," a tune from his latest album Keep Walking. "Ivan Klisanan (producer of Keep Walking) told me about her when we were recording the CD."

"The video makes it easier to understand the meaning behind the title of the song," says Trahan. "Me and my wife Chantelle came up with the story line for the video - we really collaborate good together. It came out great. I am true to my Louisiana roots, but I have a world wide vision for our Louisiana culture."