Attention to detail has always defined Yvette Girouard, who in all likelihood coached her final home game on Sunday when LSU's squad run-ruled South Carolina 8-0. 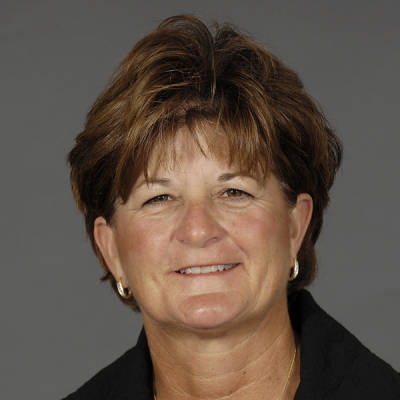 Yvette Girouard is looking out from the deck of the second floor of LSU's softball clubhouse - as of Sunday, renamed the Yvette Girouard Clubhouse deck - and looks at the grass berm that stretches across half of Tiger Park's outfield. It is an hour after Sunday's final pitch, and most of the folks left in the park are at a party being held in her honor.

"I wanted that berm to go all the way across," Girouard says. "I guess I'll leave that for the next coach."

Attention to detail has always defined Girouard, who in all likelihood coached her final home game on Sunday when LSU's squad run-ruled South Carolina 8-0. That's why, on the way to the third-base coaching box that she has prowled for nationally ranked programs for three decades, she stops to pick up a small piece of trash that had blown from the stands and onto the turf behind home plate.

Want to keep the place looking good, you know the place being the stunning Tiger Park venue that Girouard finally saw become a reality three years ago.

"This is the house that Yvette built," LSU athletic director Joe Alleva said Sunday afternoon in a post-game ceremony honoring Girouard. "Her signature is all over this park, and all over this program."

Fittingly, Girouard's signature was written out in white paint on the left-field berm of the $12 million facility all weekend - and few that were there for the final regular-season games knew that Girouard had to borrow field chalk - paint was much too expensive - when she began her collegiate career with ideas and little else.

Now, the park will remain a lasting legacy to the unique position the self-professed little girl from Broussard finds herself in as she approaches retirement.

Quick name another Louisiana collegiate coach that has taken two state programs to the absolute pinnacle of his or her sport - in this case, the Women's College World Series. Her teams at then-USL made it to the World Series three times in four years, and she's taken two LSU squads to Oklahoma City in an 11-year stint that winds to a close at the end of this season.

"I've been a lucky girl," Girouard says when she is able to compose herself while being showered with gifts and mementos after the game.

Luck had little to do with it.

"I've always felt she is what college athletics should be about," says Lafayette's David Tidwell, a friend since Girouard began the Ragin' Cajun program for the 1981 season. "She takes care of her kids, and that's why all of her players have nothing but good things to say, nothing but positive things, about her."

A number of those "kids" were on hand Saturday and Sunday, many of those "kids" approaching 50-something. They were the ones who were part of Girouard's first few seasons at USL the ones that took her out for a night of reminiscing and adult beverages at George's in Baton Rouge after the Tigers' Saturday victory.

That was after the older kids took pictures with the newer kids - this year's Tiger team members. Pat Pourciau, who threw the first pitch in the history of the UL program back in February of 1981, took a picture on Saturday with Rachele Fico, who pitched Friday's LSU win over the Gamecocks.

Members of both groups gathered around that signature for more pictures, and it was a striking contrast - the Tiger players in purple and gold, and the long-ago Cajuns in red warm-ups old enough to be used for a "throwback" night.

"It was awesome to see all of that team," says Ursula Quoyeser, who had the rare privilege to play for Girouard in both high school at Lafayette High and in college at USL. She was on that first team that finished 7-15, and never again - 30 years worth - did Girouard have a losing record.

And it wasn't just players. Some fans who watched Girouard's first teams, many of them from the old Centerfield Club at what used to be Lady Cajun Park, were also on hand for the weekend.

Two seats were empty, though - two seats that had been brought over from the original Tiger Park with their "Girouard" name plates still attached. The seats, for Girouard's late parents Alton and Rosemary, were brought onto the field during the post-game. Alton passed away many years ago, and Mama Girouard died in September of 2007, less than a month before the groundbreaking for the new stadium.

"To those two ," Girouard says as she motioned to the seats, and she never got any further.

Girouard announced in March that this would be it, the last year she'd coach the Tigers, after 20 years at USL and 11 at LSU. Unless by some miracle the Tigers are granted a host slot for an NCAA Regional, she'll finish her career on another field.

"It consumed my life for so long that I had to pull away," she says. "Sometimes I was overwhelmed by it."

It hasn't helped that her alma mater and the program she formed, nurtured and turned into a national power have all but turned their backs on her. There are no signs, no banners, nothing to symbolize USL's success of those 20 years - many of which Girouard spent as a part-time employee with a part-time, no-benefits salary - and the record books only give cursory mention of the program that was and remains the most nationally successful of any Ragin' Cajun sport.

Lafayette's daily newspaper didn't mention a word about Girouard all week, either leading up to or the day after her final home game.

She would never say it in so many words ("She's one of the nicest people I've ever met, a wonderful human being," Tidwell says.), but those actions/inactions cut deeply. Common sense says they're also part of the reason she's about to move into a nice home in the White Oak Lane area of Baton Rouge, instead of making plans to return to her Broussard hometown.

Granted, the new digs are appealing. "It's pretty damn nice," she says. "I can fish in my own back yard, and I'm almost living in the woods there are miles of trails through there, but I can still be at the park in 20 minutes."

But it wasn't how she envisioned it a few years ago. "I always thought I'd head home," she said Sunday, "but my friends are all here now."

And even more telling was one of her statements to Sunday's post-game crowd. "I have to thank LSU," she said, "for making me feel wanted."