In District 31, incumbent state Rep. Don Trahan is fending off well-funded challenger Nancy Landry, who's taking the fight into his own back yard. 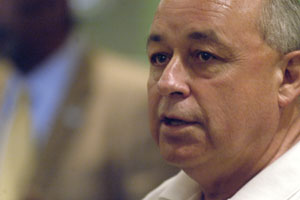 In contrast to south Lafayette, you won't see too many yard signs in Maurice for either Don Trahan or Nancy Landry ' the two candidates vying for state representative of District 31 which stretches from Lafayette into northern Vermilion Parish. With both Trahan and Landry having strong family ties in the tight-knit Cajun community, where who's going to "make some votes" is typically a hot topic, many Maurice locals are mum on who they favor in the race.

"People are keeping it close to the vest," says Gary Villien, a member of the local board of aldermen who declines to say who he supports in the race. "Both [of the candidates] have ties to the village," he adds. "I'm curious to find out how it's going to be. I'm curious to see if Don Trahan will still have the ties that got him elected last time ' if he will maintain that level [of support] or if Nancy's going to make an impact."

Despite making up only about 20 percent of the district's overall voting population, the area of north Vermilion Parish promises to play a key role in the District 31 race. Trahan, a Maurice native, is counting on having the same strong support from his home base that won him the election in 2003. In that race, Trahan edged out Lafayette Republican Charlie Buckels by 13 votes in a runoff election. Buckels carried Lafayette Parish by more than 1,200 votes but captured only 30 percent of the vote in Vermilion Parish.

Four years later, Trahan once again finds himself in a heated contest. He's been greatly outspent and, by most accounts, outworked by political newcomer Nancy Landry, who has been actively raising money for a year and walking door to door throughout the district for almost four months. "I've knocked on almost 6,000 doors," she says.

She launched her first TV ads in March. Her message has largely centered around her bio as an award-winning family law counselor and a proponent for sweeping ethics reform in the state Legislature. Landry is a divorced single mother with two sons ' a rarity in politics ' and has used that experience to reach out to other people. "It's made me a stronger person," she says. "I've always tried to use the experiences I've had to help other people. Everybody's had their family troubles and personal difficulties. I think what sets people apart is how you handle it and what you do with that experience. Do you help other people with it or do you brush it under the rug?"

Last week, Landry's campaign put out a press release saying she is now in the lead with under a month to go in the election. According to a poll her campaign commissioned from Southern Media & Opinion Research out of Baton Rouge, Landry has surged passed the incumbent. The poll shows 38 percent of voters favoring Landry, compared to 30 percent for Trahan, and 32 percent undecided. "I've been working really hard for a year now," Landry says. "I think the feedback we got from the poll shows that the message we've been trying to get out is reaching the people, and they're responding."

Trahan, who just began launching ads and getting his campaign signs out last week, dismisses Landry's poll. He says he's seen other polls that show him in the lead and thinks he'll have a bigger edge once most of the undecided voters look at his record and experience. "Nancy's outspent me three to one," Trahan says. "And I haven't started my campaign yet. When I get my message out, it's going to be all the difference."

The most recent campaign finance reports show that, as of Sept. 10, Landry had raised a total of $125,410, with $47,800 left in the bank. At press time, Trahan's latest finance report was not yet available, but the incumbent says he plans to raise and spend approximately $70,000 throughout the course of the campaign ' roughly the same amount he spent in his last race. Trahan plans on largely utilizing direct mail and radio ads, noting TV is not as personable. Trahan's last campaign finance report, filed in January, also shows his affinity for another old school campaign tactic. According to the report, Trahan spent approximately $320 in campaign funds on "gifts" from cigar shops. "That's a common practice," he says, noting he likes to hand out the stogies at fund-raisers and other political events. "Instead of buying drinks, I buy cigars."

Trahan's main message to voters is that he's the candidate with the most experience. In addition to his one term in the state House, Trahan has a long track record of government involvement. Under former Lafayette Mayor Kenny Bowen, Trahan served as director of Lafayette's Community Development department, Planning Zoning & Codes, and as interim chief administrative officer. Trahan also served as a former legislative assistant to the late Cecil Picard and also boasts of his ties to the current Republican leadership in the state Legislature. He expects the Republican Party to take over a majority of the state House in this election and notes he will be in line for a leadership position.

"I will be a [committee] chairman," Trahan says. "I will be the only returning experienced Republican in the House of Representatives for Lafayette and Vermilion parishes. They need that experience."

Trahan also notes that Republican officials are supporting him; he's banking on campaign assistance from both the state party and the Committee to Elect a Republican Majority. In addition, Trahan has been endorsed by both the Louisiana Association of Business and Industry and the Louisiana Association of Educators. "Don really has done a yeoman's work on the education committee," notes Lafayette High English teacher Melinda Mangham, who serves as the LAE's state legislative liaison.

On the issues, there appears to be little difference between Trahan and Landry. Both are touting their endorsement of the Blueprint Louisiana agenda ' and its ethics reform package ' as well as expanding Pre-K education and dedicating more tax revenue directly to infrastructure needs. Landry, a registered independent, has largely been selling herself as a conservative who can work across the aisles with both parties. She has the support of several prominent Republican donors ' including River Ranch developer Robert Daigle, insurance mogul Dwight Andrus III and Louisiana Oil and Gas Association President Don Briggs. Landry also frequently plugs her support for Republican gubernatorial frontrunner Bobby Jindal.

Not wanting to repeat Buckels' results in Vermilion Parish, Landry has made an aggressive push to garner support there, which could ultimately prove just how many inroads she's been able to make. Landry has been making the rounds across the parish for months, often being introduced to people by her cousin, Barbara Landry Picard, who served as the mayor of Maurice for 24 years. Landry also held her campaign kickoff at Floyd Sonnier Gallery in Scott ' where the artist featured a drawing he made of the Landry family's old Vermilion Parish homestead.

The Trahans are also a well-known Vermilion Parish family. Don's father was the Maurice postmaster, and his uncle served as the town's only doctor and mayor for years. The Trahan family also owns and operates the world famous City Bar. The current mayor of Maurice, Picard's successor, is Bob Ferguson, Don's cousin.

With his history in the area, Trahan insists Landry cannot compete with him in Vermilion or elsewhere in the district. "The key is I now have a record," he says. "And the Republican conservative portion of my district knows I have a record and they like my record. The people in Scott like my service to them. The people in Milton like my service to them. They consider me one of their own. Nancy Landry is not considered one of their own.

"Vermilion Parish will vote for me in the same numbers they did last time if not greater numbers," he adds.

But Barbara Landry Picard contends that's not necessarily the case. "Some of the families that I know will vote Nancy, but they're not saying," she maintains. "And I can't blame them. I know [the Trahans] well. They're all friends. It makes it difficult. So we kind of keep it quiet."

"I think Nancy will do well," she adds. "I'm finding cousins I never knew I had."