How does an economically strapped state deal with an unprecedented oil spill recovery and potentially record flooding? We may be about to find out.  By Jeremy Alford

The tension in the room is palpable, and no one - from the flacks to the hacks - wants to stay on the agenda. From freshwater diversions to stresses on coastal habitats, a legislative hearing held last week on the ongoing recovery from last year's oil spill couldn't help but veer into matters related to Louisiana's expected flooding problems that are moving down river. 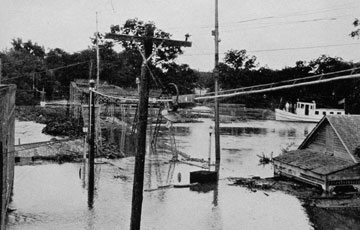 How does an economically strapped state deal with an unprecedented oil spill recovery and potentially record flooding? We may be about to find out.  By Jeremy Alford

The tension in the room is palpable, and no one - from the flacks to the hacks - wants to stay on the agenda. From freshwater diversions to stresses on coastal habitats, a legislative hearing held last week on the ongoing recovery from last year's oil spill couldn't help but veer into matters related to Louisiana's expected flooding problems that are moving down river.

"There's more water on the upper Mississippi River right now than any time in history - period - in any time in history," says Garrett Graves, chairman of the Coastal Protection and Restoration Authority. "This overwhelms the volume of water that was in the river in 1927, 1937, 1997, 2008. An extraordinary flow is coming down the river."

That water levels are expected to be above crest for seven to 10 days doesn't inspire much confidence. Graves says there are "vulnerabilities everywhere from the levees in Baton Rouge to the levees in South Louisiana."
State Rep. Joe Harrison, R-Napoleonville, put out the call for the Louisiana Department of Insurance to begin working with low-lying residents or those who might experience backwater flooding. It's a lesson learned from Hurricane Katrina and many of the other storms that have plagued the coast.

If there's going to be a challenge in the process, it'll likely involve insurance coverage. In particular, Harrison urged the LDI to become proactive now in places like Morgan City.
"This is not something that may happen; it will happen," says Harrison.

Lawmakers also lament the possibility of opening up the Morganza Spillway, which has remained closed since 1973. And then it was only opened due to complications at the Old River Control Structure. An executive staffer close to this year's preparations says state officials have been "shocked" in some cases to see how "antiquated" some of the flood-protection systems are down the river.

By press time Monday, incremental release of the Bonnet Carre Spillway had begun to divert part of the river flow to Lake Pontchartrain.

A decision to fully open the Morganza Spillway in particular would likely mean significant backwater flooding along the Atchafalaya River, in many portions of Acadiana and down to the central coastline - what many may view as choice to relieve pressure on Baton Rouge and New Orleans protections at the cost of Acadiana. Actually, some locals already feel that way.

"If there's ever a choice between Morgan City and New Orleans, we know who the choice is going to be," Morgan City Councilman Larry Bergeron told The Daily Advertiser last week.

The impact of freshwater on coastal marshes could also be devastating for oyster fishermen, who are still trying to recover from last year's oil spill. State Rep. Reed Henderson, D-Chalmette, says the oystermen in his district are only 10 percent recovered from their losses so far.

The state Wildlife and Fisheries Commission heard emergency requests on the situation last week and decided to open up the oyster season early in Lake Borgne and Mississippi Sound area. Department officials also took the initial steps Monday to request a "fisheries failure" designation from the federal government, just in case the matter goes from bad to worse, and a "disaster declaration" from the Small Business Administration to protect related economies.

There has likewise been talk of relocating some oyster beds, but the scenarios surrounding such an undertaking remained unclear as this week got off to a start. Possibly most telling, though, the department is urging the public to stay away from protection levees. Effective immediately.

Henderson adds that commercial fishermen in his area are bringing him accounts of slimy oysters and crabs with short life spans and others with small pinholes in their shells. Wildlife officials say both the oyster slime and lethargic crabs - meaning they're live when harvested, but dying before market - are normally occurring events related to bacteria and other factors.

"The United Houma Nation Tribe, they were experiencing crabs not having a good shelf life when they get back to the dock," says Drue Banta, counsel for the Governor's Office of Coastal Activities. "They said they weren't able to sell them because they were dying in a very short window of time."

As for the reported pinholes, officials have no immediate explanation. That's more bad news for crabbers, too. Casey LeBlanc, owner of Cajun Crab Connection on Bayou Des Allemands, says his company has gone from working with 10 boats each day to about three. Obviously, complications from flooding won't help a thing.

"Buyers had signs out - Louisiana Blue Crabs Served Here' - so they took that down," LeBlanc notes. "They went from customers requesting them to telling them they don't want them no more. They scared them, you know, might have dispersant in them or whatever."

While last week's legislative hearing did veer into the river stages, it addressed spill-specific issues as well. For example, on the other side of the business of the Gulf, oilmen are facing changes. Enhanced oversight of blowout preventers by the state has become a major initiative, especially since it was considered a big factor in the demise of the Deepwater Horizon rig. At one time, Louisiana officials allowed inspections to be confirmed verbally.

"We basically have developed a specialized form we use for inspecting oil and gas wells during the drilling phase," says Bob Harper, Department of Natural Resources undersecretary. "They focus on blowout prevention issues that the inspectors are expected to check very closely and document that these are in compliance."

Then there's the issue of money to cover all of Louisiana's damages from the spill. Graves says BP has so far ponied up $14 billion as the responsible party, and the federal government has expended about $900 million from its oil spill trust.

The Natural Resources Damage Assessment process on the federal level will yield money for local projects, but it could take upwards to 10 years until the so-called brick and mortar process is complete.

More immediately, BP is expected to pay as much as $22 billion in fines, and Louisiana's congressional delegation is working to steer about 80 percent of the cash to the Gulf Coast for ecosystem restoration. Louisiana officials may also be able to achieve the same thing through negotiations, Graves adds.

BP put up a $1 billion "down payment" for the restoration of natural resources injured as a result of the Deepwater Horizon oil spill, Banta said, and that process will begin with each state receiving an equal allotment of $100 million -- with the opportunity to tap into an additional $300 million allocated to Gulf state-sponsored projects based on impacts from the spill.

"I know it's not fair, but it was a tough negotiation," says Banta.

According to Peggy Hatch, secretary for the state Department of Environmental Quality, BP is likewise facing fines on the state level that could equal more than $300 million.

"But they haven't been levied yet," Hatch points out.

Aside from what the rivers have in store for us in South Louisiana, it's safe to say that any flooding will surely help put last year's oil further in the past.

Bob Graham, a former U.S. senator from Florida and a member of President Barack Obama's Oil Spill Commission, warned as much last month during a visit to New Orleans. Over the past several months, more than one event has bumped the spill from the front page - conflicts overseas, a national recession, pop culture curiosities.

"All those things and others have tended to draw the public's attention away from what happened on April 20," Graham says.

Nonetheless, the recovery is still ongoing. Businesses are still looking for ways to survive. People are dealing with economic losses and health concerns. And all of these challenges will still exist here in Louisiana come June and July, flood or no flood - hopefully the latter.